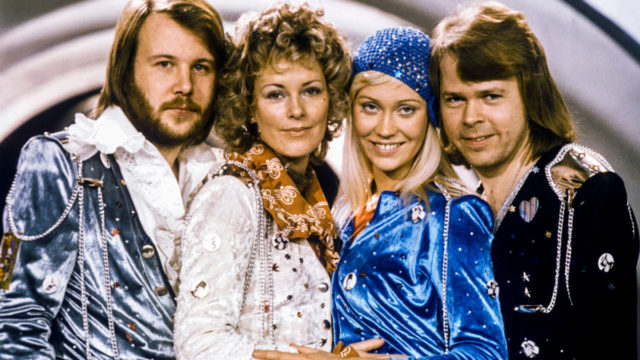 Why are Aussies so obsessed with Swedish pop group ABBA?

Younger Australians might have memories of their mum and her friend standing back to back, holding imaginary microphones and singing Mamma Mia!

In homes around the nation, it’s the riff that stops the barbecue.

But for the Aussies who were teens when the song was released and who lived through ABBA-mania, the riff is also the beginning of a song of heartbreak and nostalgia.

And the news that Agnetha, Frida, Björn and Benny could be about to drop their first new music in 39 years has left them ecstatic.

From classic films to crummy cover bands at the local pub, this love affair that began in the 1970s has brought Australians so much joy that it’s hardly surprising.

The band recently joined Instagram, a move we suspect was part of an elaborate promo for their new musical feats.

They’ve also been releasing digitally remastered versions of the old film clips that shot them to global stardom, posting videos to Twitter with variations of the caption: “Did you ever wonder how the SOS video would have looked like if it was released today? Well here’s the answer, watch it now in 4K!”

It’s clear the Eurovision 1974 champs want the world to remember how much they loved that signature ABBA sound before fresh music is released.

Nothing is certain, but The Sun has reported that the new project will involve holograms – or ‘ABBA-tars’ – of the band’s younger selves.

They’ve had a custom theatre built and on Thursday morning unveiled the ABBA voyage website, where fans can sign up for updates on the planned tour, set to launch in 2022.

And with it, a promise of five new songs.

Including I Still Have Faith in You and Don’t Shut Me Down, which have both been in the pipeline for years and were confirmed by Bjorn in 2019.

The four Swedes arrived to a crowd crush in Sydney on February 27, 1977.

They didn’t say hello to fans – or rather couldn’t – with fears for their safety as thousands screamed and sobbed at the airport.

They toured the country, appearing 11 times in four cities in just 13 days – each time met with absolute mayhem.

Their concert at the Sydney Showground on March 3 was almost cancelled because of the weather.

But as all the best performers know, the show must go on. They performed despite the pouring rain and revellers showed up for it.

It was a health and safety risk that may not hold up in 2021, with Frida taking a tumble on the slippery stage and crew members trying to sop up the water with towels from their hotel.

It’s safe to assume those dedicated Sydney fans went home that night soaked to the bone and covered in mud, but no doubt glad they went.

Because when the foursome waved goodbye to Australia a few days later, they were never to return.

Those who missed out on attending concerts during that tour can’t have expected the next opportunity to see them on stage would be in holographic form – more than 40 years later.

Fernando spent 14 weeks at No.1 in Australia – a record that still hasn’t been beaten.

It went on so long that Countdown host Molly Meldrum outraged fans by threatening to stop playing it after 12 weeks.

Alas, by the end of 1977, only the most loyal supporters were still tuning in. When ABBA released The Name of the Game it didn’t even make the top five.

Films that rekindled the passion

Soul mates always find each other, though, and almost 20 years later in 1994 comedy-dramas Muriel’s Wedding and Priscilla, Queen of the Desert reminded Australians what they had been missing.

Both films featured the band’s best offerings and sparked a nostalgic revival across the country.

Audiences will remember a classic scene in Muriel’s Wedding, in which Muriel (Toni Collette) and Rhonda (Rachel Griffiths) perform a striking and hilarious rendition of Waterloo to a crowd of adoring fans.

In Priscilla, Queen of the Desert, Mamma Mia! was the perfect choice for a long bus trip and a glittering drag show.

And who could forget the sweet irony of Bernadette (Terence Stamp) morosely declaring, “I’ve said it before and I’ll say it again, no more f—ing ABBA!”

In 2008, Mamma Mia! – resplendent with a star-studded cast including Meryl Streep – sealed the deal and left audiences hungry for more.

Not ABBA, but close enough?

So, the band never returned to Australia’s golden soil. Who needs ’em?

The classic tunes from days gone by soon became the bread and butter of cover bands across the country – not all of them crossing the desert in an old bus called Priscilla.

Since the 1990s, big names like Bjorn Again, Dancing Dream, Abbalanche, Abbarama, Abbasback, Abbacadabra and Abbalive have graced pubs around the nation with fake Swedish accents and outrageous costumes.

If you think it’s easy to come up with an original, unused title for a tribute Abba band, you’d be mistaken.