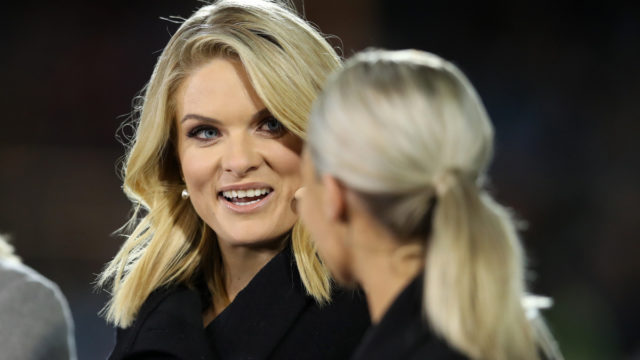 Sports broadcaster Erin Molan was the subject of a “social media frenzy” and comments such as being a “racist b—h” and “mutt” following on online media story, a court has been told.

The 39-year-old is suing the Daily Mail Australia for defamation over one article and two tweets that she says portrayed her as a racist after saying “hooka looka mooka hooka fooka” on air in May 2020.

The Daily Mail has argued a defence of truth to the defamatory meanings alleged by Molan.

Molan was retelling a “flippant silly funny story” and was speaking “gibberish”, her lawyer Kieran Smark SC told the Federal Court on Monday.

The Nine Network presenter was working as a co-host on the 2GB rugby league show The Continuous Call Team at the time, when she referred to a previously heard story about Ray and Chris Warren, the court was told.

Molan was then contacted by a Daily Mail journalist who she explained the reference to, and never said the phrase had been an “in-joke” that was later attributed to her.

Asked why her co-hosts did not laugh, she said there was a lot of background noise, but this was later described as them “sitting in awkward silence”.

She was then said to have refused to apologise for the “jibe on live radio”, when in fact she did say sorry for her clumsy and inappropriate comments the same day the article was published, on June 5, she said.

There had been no complaint about her statement until the Daily Mail “generated a firestorm” prompting a reaction after it “set her up”, the Federal Court was earlier told.

One Twitter poster called her a “racist, entitled mutt” while another said she was a “racist bitch” and they would trip her to “scrape her racist mouth on the ground”, Mr Smark said.

“This is a response to the Daily Mail articles, not her conduct, but the news story the Daily Mail has manufactured out of a small innocuous … or attempt at a funny piece on a live air show.”

Molan is expected to give oral evidence on Monday afternoon at her virtual Federal Court hearing.