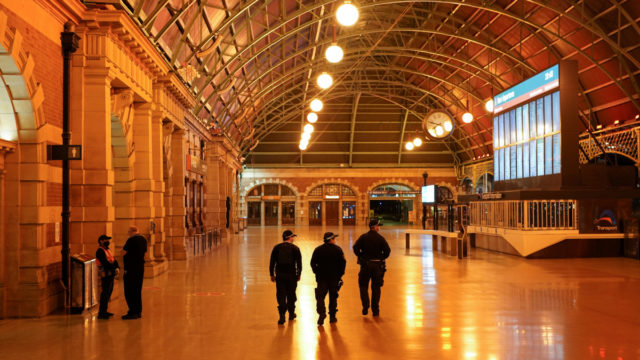 Ever wondered what happens behind the scenes and on the ground inside a major railway network?

Unlike most reality TV shows that can be heavily produced and predictable with wannabe celebrities, a new SBS documentary series, Inside Central Station, is about to give viewers the chance to see real-life stories unfold, blending in “unscripted high-stakes drama” from some of its 11,000 staff.

No, you’re not going to see famous railway station suspense – think the iconic Union Station shootout Kevin Costner scene from The Untouchables or Jason Bourne trying to save an informant at Waterloo Station in the Bourne Ultimatum.

Nor will you see a runaway train, a train under siege or a murder on a train.

Even better! You’re in for a wild, trackside, fly-on-the-wall ride in reality.

“A massive lightning strike takes out a signal box bringing trains to a standstill, stranding thousands of passengers. A woman faints into the path of an oncoming train.

“A once-in-a-generation rain event derails a heritage train and much of the rail network,” says SBS.

A bit like the hugely popular Heathrow: Britain’s Busiest Airport (which is still going after seven series), producers are given “exclusive access to every facet of rail operations” with camera crews bedded down at Sydney’s Central Station to capture all the action as it unfolds.

“[It] shows the extraordinary commitment, skill and good humour our people bring to their work every single day as they keep our customers moving in an environment where anything can happen at any time.

“They are the true stars of this network.”

SBS’s television director Marshall Heald said: “The scale and breadth of the access is brilliant and will certainly take viewers to unexpected places.”

We get to see the panic from a train driver as a dog runs across the tracks, the moment Central Station floods and thousands of passengers are walking through water, and inside the 24/7 ROC (Rail Operations Centre).

As dramatic music creates just enough tension, serious ROC train security staff (who may have Denzel Washington’s The Taking of Pelham 123 on speed dial) watch multiple security screens as one man is spotted trespassing, another is drunk – pushing a shopping trolley near the tracks – and then gets “punched in the head” – and someone is stabbed.

Elsewhere, a woman standing on a platform collapses into another passenger sending both crashing into the path of an incoming train, and a mechanical fault has brought not just a train, but the entire city circle line to a standstill.

This show also packs a lot in for the dedicated train fan who enjoys the iconic Greatest Railways journeys series, hosted by politician-turned-traveller Michael Portillo.

He recently told the VACC (Victorian Automobile Chamber of Commerce) that while he was interested in motorsport growing up, his stepfather loved trains.

“My stepfather was a steam engine fanatic, and I would go to steam engine rallies and learn about engineering.

He’s got a sizeable collection of vintage and rally cars, and owns a “forklift, scissor lift, boom lift, car, motorcycle, bus, truck, all the way up to a semi-trailer”. No train … yet.

Weaving in and out of moments of high drama, each episode shares historic and contextual stories of life on the railway network and its evolution in Sydney.

She also goes into the St James tunnels, set up as air raid shelters during WWII to survey graffiti left by soldiers, and takes viewers inside a secret clock room below Central Station, where hundreds of railway clocks are repaired and stored.

“It’s amazing how many people have a family connection with the railways in some way – that’s why we call it the railway family,” she tells TND.

“I’m most looking forward to sharing the history of Central and special behind-the-scenes places with viewers next week.”

Inside Central Station premieres at 7.30pm on Sunday, September 12 on SBS and SBS On Demand and weekly thereafter

The post Sick of scripted, predictable reality TV? New docu-series <i>Inside Central Station </i> changes all that appeared first on The New Daily.