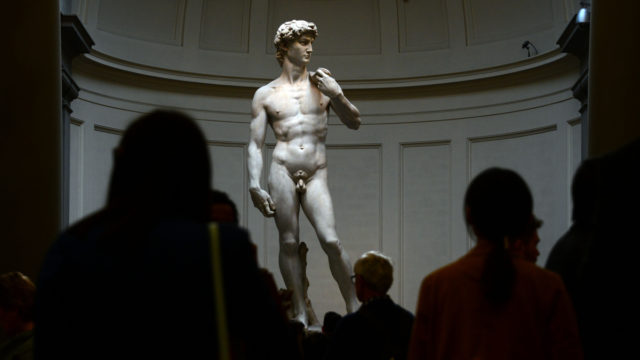 On this day 520 years ago, Michelangelo began work on a sculpture that would come to be known as one of the greatest masterpieces of human history: The statue of David.

At 26 years of age, Michelangelo began carving the statue of the biblical figure early in the morning of September 13.

Michelangelo was tasked with turning a giant block of marble, chipped away at by another artist and left neglected outside for almost 30 years, into a finished work of art.

Originally, David was commissioned as one of a series of statues of biblical prophets that would line the roof of the Florence Cathedral.

The large block of marble was sourced from a quarry in Carrara, a town in the Apuan Alps in northern Tuscany, and commissioned to Florentine sculptor Agostino di Duccio in 1463.

Two artists, including di Duccio, worked on the shape of the legs, feet and torso for 10 years before their association with the project ended, and the marble slab was cast aside.

In 1501, Michelangelo was commissioned by the Overseers of the Office of Works of Florence Cathedral (the Operai), who were eager to see their favourite subject be personified in stone.

Four years later, the statue of David was complete.

David stands over five metres tall and is estimated to weigh more than six tonnes.

It is now considered an unparalleled masterpiece that defines the Renaissance period.

Since its debut in the early 16th century, the portrayal of David has awed visitors with its highly life-like form, unconventional portrayal and sheer scale.

In the biblical narrative, David battles and defeats the colossal Philistine Goliath using a sling and then beheads him.

Most depictions at the time painted or sculpted a young David moments after he had slain Goliath.

Michelangelo captured a determined David before his battle, with a sling in his hand in a natural standing position.

The post On This Day: Michelangelo begins sculpting statue of <i>David</i> appeared first on The New Daily.