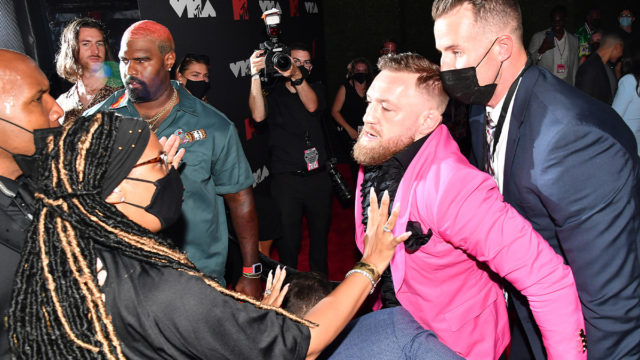 MTV’s Video Music Awards has returned with a splash in 2021.

Kicking off on Sunday night (local time), the VMAs were packed with surprise appearances, live performances, masked fans and a dash of red carpet violence.

It was the first major awards show in New York to be held with a full audience of fans and celebrities since the COVID-19 pandemic began.

Didn’t watch it? Here are the major moments to bring up at your next Zoom meeting.

McGregor retaliated by throwing what was left in his glass at Kelly, which splashed Transformers star Megan Fox, who was standing nearby.

Not great news for her almost entirely sheer gown.

Fox was quickly pulled away from the scene as security separated the agitated men.

Vision has been posted online of fans being pushed back to make way for Fox, while the crowd tries to get a better look at the scuffle.

McGregor’s PR team has since blamed Kelly, who was among the performers on the night, for the altercation. They told USA Today it was “unfortunate that MGK’s security overreacted”.

Meanwhile, Jennifer Lopez disappointed by arriving on the red carpet without boyfriend Ben Affleck in tow.

The pair have recently reunited, 17 years after calling off their engagement, and fans were hoping to spot them together in New York.

The couple made their red carpet debut just days ago at the Venice Film Festival for the premiere of Affleck’s latest film The Last Duel.

Perhaps Affleck didn’t have the energy for the VMAs, after restraining one of JLo’s overzealous fans at the airport on the way home from Italy.

Posting some glamour shots to Twitter before arriving at the ceremony, Lopez wrote: “Let’s go VMAs”

The original Material Girl, Madonna, put the M back into MTV with a surprise introduction to the music channel’s 40th anniversary.

The leather-clad Queen of Pop, who appeared at the first VMAs in 1984, was also celebrating 40 years in the music business.

The Like a Virgin singer unveiled the trailer for her new documentary Madame X, named after the alter-ego brought to life in her 14th album.

In a nod to MTV’s fourth decade in the industry, as well as her own, Madonna said: “Forty years ago, another underdog arrived in New York City hoping to create something revolutionary and an all-music channel premiered in the middle of the night and called itself MTV. We found each other and from then on changed my life, changed music and created a new art form. That’s why there’s only one place to be tonight.”

And the winner is …

But forget the drama, it’s all about the awards, right?

The biggest prizes this year were taken out by rapper Lil Nas X and former boy wonder Justin Bieber.

Lil Nas X claimed the night’s highest honour, Video of the Year, for his gay rights anthem Montero (Call Me By Your Name). The 22-year-old shouted, “Let’s go gay agenda!” while accepting his trophy.

Artist of the Year went to Bieber, 27, for his latest album Justice. He also took out Best Pop song for his single Peaches.

The post Conor McGregor and other big moments from the 2021 VMAs appeared first on The New Daily.