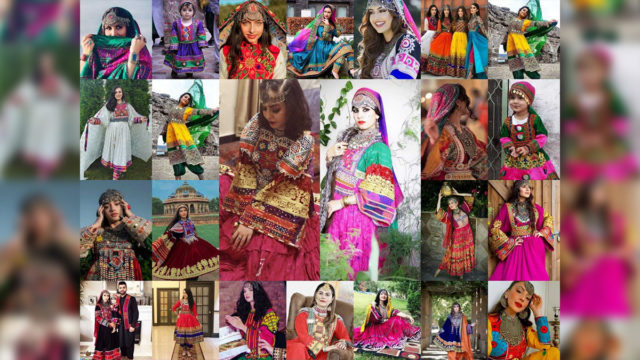 Our clothes send a message. And Afghan women across the world have used theirs to write a clear note to the Taliban: “Don’t touch.”

Former history professor at the American University in Afghanistan, Dr Bahar Jalali sparked a social media campaign reclaiming the identity and clothing of Afghan women, the BBC has reported.

Images of figures garbed from head to toe in fully veiled black abayas, covering even their hands and faces, have emerged from Kabul.

The shrouded women hold signs with pro-Taliban messages, including claims that those who wear make-up and modern clothing “do not represent the Muslim Afghan woman”.

But in an act of defiance, Afghan women from across the globe have united to fight that message and remind the world of the multicoloured, hand-embroidered, traditional cultural dress of their people.

Dr Jalali told the BBC she started the campaign because one of her “biggest concerns is Afghanistan’s identity and sovereignty is under attack”.

Using the hashtags #DoNotTouchMyClothes and #AfghanistanCulture, women are posting images in their traditional attire. The clothing is bright and colourful, a joyful expression of culture and heritage.

Some women wear pleated skirts, dresses or pantsuits, with tiny mirrors stitched across the breast.

There are as many styles of traditional dress as there are regions in Afghanistan, with each unique to the area.

Some wear hats, or embellished scarves around their heads or shoulders.

“This is Afghan culture,” Dr Jalali, who founded the first gender studies program in the country, posted to Twitter on Sunday.

“I am wearing a traditional Afghan dress.”

She then shared a throwback photo from her teenage years, wearing a dress from a different part of the country.

“We will not let our culture be appropriated by those who want to erase us. #DoNotTouchMyClothes #AfghanistanCulture” Dr Jalali wrote.

And she started a movement, with other women proudly sharing pictures of their traditional dresses and outfits online using the hashtags.

Importantly, one Twitter user, psychotherapist and activist Nahid Fattahi, put into words the endless possibilities for how an Afghan woman chooses her clothing.

“Some of us wear traditional clothes, some westernised, some wear hijab and some dress modestly,” Ms Fattahi wrote.

“Afghan women even in the most conservative families don’t dress in those outrageous black cloths also known as ‘Niqab Hijab’”, she added on Instagram.

It comes after the Taliban told Australian-raised newsreader Yalda Hakim on air in August that women in Afghanistan would not suffer under the regime.

As reported by The New Daily, the Kabul-born Hakim asked for clarity on behalf of women and girls who had written to her worried about how their lives might be about to change.

She said women on the ground feared they would not be allowed to access education and work and would no longer be permitted to cover only their heads, but would instead be made to wear the full burqa.

She was assured by Taliban spokesman Suhail Shaheen this would not be the case.