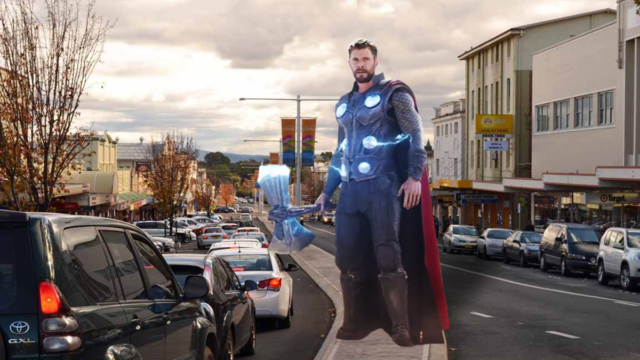 “If they build it, he will come” is the pitch for a regional NSW tourism campaign in a bid to attract Thor megastar Chris Hemsworth to help the small town of Cowra in its post-COVID economic recovery.

On Wednesday, Cowra Tourism launched a tongue-in-cheek ad “Get Chris to Cowra” to try to get Hemsworth and his wife Elsa Pataky and kids to visit the “charming, quintessential Aussie town” in NSW’s central west.

In the opening sequence, with a noisy sheep in the background, one tourism official asks his colleague who the Australian tourism ambassador is [was, in 2016].

She asks: “Why would Chris Hemsworth want to come to Cowra?”

“To take in the tranquility of the Japanese gardens, or he could step back in time at the POW camp, or if he came in spring he could see the canola fields in full bloom,” the official says.

Drawing inspiration from the giant pineapple on the Sunshine Coast, the giant merino in Goulburn in NSW (not to mention the banana or the prawn sculptures), the ad unfolds with the pair deciding to build a giant Hemsworth statue dubbed the “The Big Chris”, to try to get the star to take a drive west.

Cowra Tourism Corporation tourism manager Glen Daley said that because Hemsworth (Extraction, Avengers) was “such a great Aussie bloke”, they just wanted to get his attention.

“We wanted to do something different to showcase Cowra to the rest of Australia. Chris is such a great Aussie bloke and we wanted to get his attention with all the fantastic things the region has to offer,” he said.

Hemsworth is only up the road in Bryon Bay, and was recently spotted barefoot in shorts picking his kids up from school. So he might have some time on his hands, even while also shooting Thor: Love and Thunder on the Gold Coast.

The tourism officials become more animated throughout the three-minute reel, worrying about the Hemsworth entourage might stay – because they’re “massive celebrities”.

“Take a pick from any one of the hotel motels … or if they’re full they could stay in a shed or a tent, they’re pretty flash these days.

If he comes? “We’ll take him out for a big feed, get on the sauce”.

And they could take him surfing. They show a speed boat towing a wakeboarder on the lake: “Unlike Byron Bay, we make our own waves”.

They decide on their pitch. It has to be “something sophisticated” and, with the town only two hours from Canberra and four hours from Sydney, they have to “think big, really big”.

The tourism official reveals “The Big Chris”: “Four storeys tall, a beard like spun canola. This could make him really famous.”

“Many Australians are itching to travel and there’s never been a better time to explore our beautiful backyard and support local regions and communities like Cowra,” said Renece Brewster from Visual Domain, the group behind the innovative campaign.

Fair to say the line was made famous by former model and television star Lara Bingle in the $180 million Satchi and Satchi campaign in 2006.

Standing on a beach in a bikini, Bingle closes the ad by asking “So where the bloody hell are you”.

It generated a massive $1.8 billion more to the tourism industry that year, according to The Sydney Morning Herald.

The Cowra locals are wearing Hemsworth cut-outs on their faces and posting photos on social media sitting in a cafe, at a school, at the local park, hopeful he will come some time soon.

The campaign encourages Aussies to sign the #GetChrisToCowra petition via getchristocowra.com.au

The post ‘Where the bloody hell is he?’: Tourism campaign’s bid to lure Chris Hemsworth to Cowra appeared first on The New Daily.