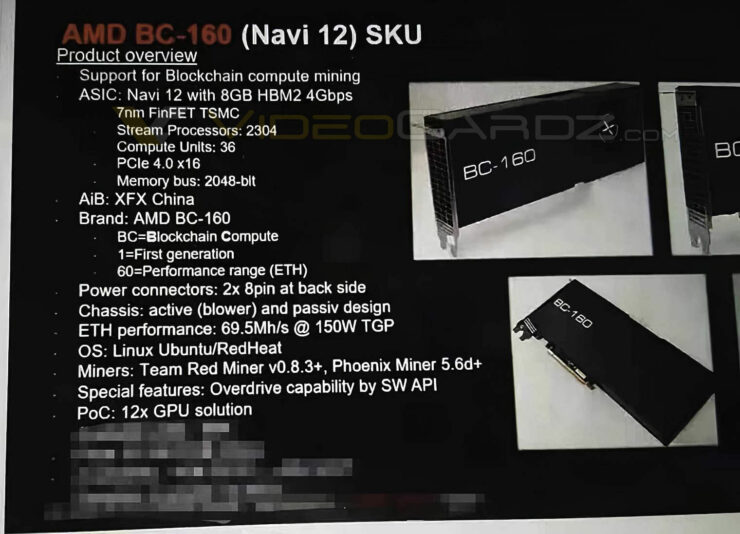 VideoCardz posted pictures from one of its readers about a possible AMD-based Navi 12 GPU, created specifically for crypto currency mining. The Navi 12 GPU first appeared alongside the AMD Radeon Pro 5600M, created for Apple’s line of new computers. Currently, it is the only Navi 12 GPU known to be manufactured. Onboard is 2560 stream processors with two HBM2 memory modules, clocking in at speeds of 1.54 Gbps.

The photos Videocardz received also came with a sheet showing specifications for a new blockchain mining card using AMD technology called the AMD BC-160. As we mentioned above, the card is based on a Navi 12 GPU with 8GBs of active HBM2 memory, 2304 stream processors, and a confusing piece of information that talked about “4GBps memory specs.” There have also been rumors earlier this year about a Navi 12 compute card, which happens to be headless, to be released.

In tracking any information about the card in question, there has been very little to speculate upon due to most board partners being silent about their crypto mining businesses. There is also no compute cards listed on any of the computer ecommerce websites currently. The only information that can be relied upon is the questionable information presented to Videocardz.

From what can be deciphered, the card in question showcases an “8GB HBM2 memory with 4Gbps speed.” This information is not readily available for the current technology. The 4GBps speeds are set to release alongside HBM3 products, but it is speculated that it is “likely not with this mining card.” Joseph Rodriguez, senior product marketing engineer for IP cores at Rambus, discussed 4GBps HBM2e chips in late June of this year. However, it is unknown if the items presented have correct information or several mistakes, which makes this highly speculative.

Also, it is noted that the specific naming for this card is confusing as well. The BC-160 title, when broken down, refers to Blockchain Compute (BC) and ETH hash rate performance numbers (16). Also, there are misspellings on the information, such as “passive” being spelled “passiv” in the material that was provided. It is not surprising, however, to see this happen on a questionable spec sheet.

Tech company XFX is rumored to be the designer of the BC-160 mining card. It is designed with a dual 8-pin power connection and have a TGP of 150W. It is also expected to produce 69.5 Mh/s, 25% more efficient than the previous Navi 10-configured Radeon RX 5700 XT.

The post AMD XFX BC-160 Cryptocurrency Mining GPU Leaked, Up To 72 MH/s in ETH by Jason R. Wilson appeared first on Wccftech.