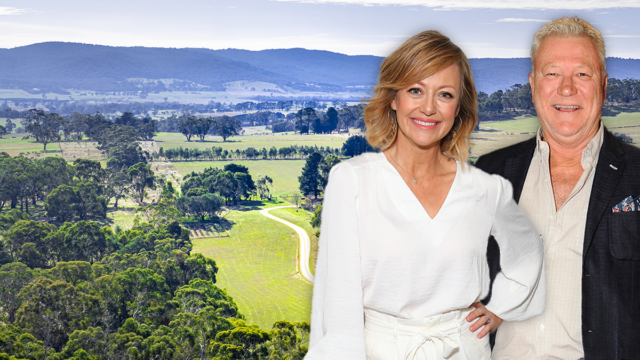 In the previous 17 incarnations of ratings juggernaut The Block, renovation couples have had to carve out their piece of paradise in suburbia, battling traffic, small spaces and the public spotlight.

After Nine recently teased “TV’s toughest challenge” was “moving to new pastures” for the first time in the history of the show, it has now been confirmed we’re in for a “tree change” in 2022.

At the time, social media went into a mini meltdown, speculating it was either Gisborne in the Macedon Ranges in Victoria (55 kilomeres north of Melbourne’s CBD) or Byron Bay on the New South Wales north coast.

Since then, real estate website Domain [of which Nine is the majority owner] reported Nine’s production company MicJoy Pty Ltd had “slapped a caveat” on a parcel of land at 207 McGeorge Road in Gisborne”, public records show”.

Domain said “developers have since secured planning approval to subdivide the land … plans online show a subdivision of seven lots with a creek running through the site”.

LJ Hooker, which sold the parcel of land on 28 hectares, advertised on its website “sold to the popular TV series The Block“.

Its selling price on September 8 was a staggering $11 million.

Wally Houli, who has been an agent for 12 years specialising in land subdivisions, rural lots and farming, told The New Daily the next series of The Block would be in South Gisborne and “it’s woken the whole area up”.

“To be honest, it’s taken the local community by storm. Some people are a bit shocked,” he said.

Mr Houli said the land would be subdivided into four-hectare parcels (seven all up) and “they’re looking to run the next TV series out of Gisborne”.

The show’s executive producer, Julian Cress, who recently made his own tree change to Gisborne with his family, confirmed to The New Daily on Wednesday night the community “was over the moon” about the show heading to Gisborne South in the Macedon Ranges.

“We are doing a tree change. We are making the show in the Macedon Ranges. After lockdowns … people are thinking I wish I had a place to go to in the country.

“We think this area has been a well-kept secret because it’s only 40 minutes from the CBD,” he said.

He said four hectares was not an easy parcel of land to renovate in three months.

What we don’t know is how much contestants will reap from their weeks of hard labour away from family, their jobs and their real life.

Last year’s so-called Blockheads took home a combined $3.33 million after their reserves exceeded an average $500,000 for renovations on five period homes in the luxury bayside suburb of Brighton.

Question is, will renovating a house in regional Australia bring in the same big dollars or will it be a case of over-capitalisation?

If we speculate that the show will continue its formula with five couples [there’s seven lots, one with an existing 1930s timber house; it’s unclear about what the show will do with the seventh parcel] building their version of a rural luxury home on 4ha [with an average $1.57m land value], each property will need to generate double that and more to make it comparable to previous years.

Is this do-able or is it a gamble, like in 2014 when Dee and Darren Jolly and Michael and Carlene Duffy made a miserable $10,000 profit for all their hard work?

Local agents reckon the finished homes could sell anywhere from $3.2 million to more than $4 million, in the region.

Mr Houli said the market was already experiencing an upturn since the purchase, and luxury homes on four-hectare blocks could fetch the big dollars with wealthy Melburnians looking north instead of the traditional Mornington Peninsula area, for example, for a family or holiday home.

“With The Block going out there and making that purchase, it’s already starting to affect the market in a good way. It started to set standards from now.

“Gisborne has always been a laid-back area of Victoria, quiet, comfortable and, all of a sudden, The Block comes in and it’s woken the whole area up.

“What will happen here is that after the completion of the series next year in Gisborne, it will attract a lot more people from Melbourne who would’ve settled for something in an area like the Mornington Peninsula.

“Gisborne is amazing. It’s beautiful. It’s near the Macedon Ranges, it has a lot going for it and is close to the city.

“It will attract wealthier people from Melbourne to buy a family home or a holiday home.”

‘Gisborne is no longer a secret’

Raine and Horne director, auctioneer and Gisborne resident Ken Grech, who sold the Heard Crescent property and has been in real estate since 1980, says land values on four hectares have gone from $850,000 to $1.2 million in the space of 12 months, so property values are only heading north, as they say in the business.

“Everyone in the town I speak to has been talking about it [The Block].”

He agrees the formula of $1.57 million for the land, plus luxury home equals bidding over $3.2 million.

Mr Houli says he wouldn’t be surprised if the homes cost $4 million to build “so what they’d sell for would be at a whole different level”.

“Where’s the market going to stop? Gisborne is no longer a secret. We are doing a lot of sight-unseen properties. Our market has changed so dramatically because of the influx of people wanting to buy in the area,” adds Mr Grech.

“For people thinking about Gisborne, well, here comes The Block … it can only enhance our area greatly.”

Mr Houli said the development came at the right time for the region given the COVID-19 restrictions and lockdowns over the past 18 months: “With The Block coming in, it will bring hope, excitement back, get people on their feet”.

Is it overcapitalising moving the show regionally after seeing such big profits in inner Melbourne, Mr Cress says they’ll “endeavour to answer that next year: “Nobody predicted Jimmy and Tam would make $1 million. I won’t predict that … the experience of doing the show in this location will be something that will be one of the highlights of their lives. If they make some profit at the end of it, good luck to them”.

“That is the prize for playing the game. Anything else is cream.”

The post Why the upcoming 18th season of <i>The Block</i> will be like no other appeared first on The New Daily.