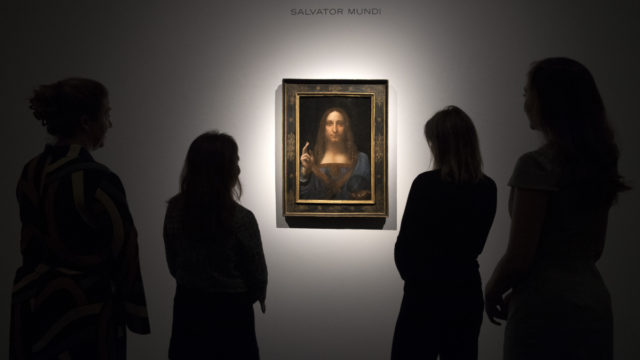 On this day five years ago, Leonardo da Vinci’s Salvator Mundi became the world’s most expensive piece of artwork after it sold for $US450.3 million ($614.1 million).

November 15, 2017 marks the day the last privately owned artwork from the Renaissance painter went up for auction in New York, sparking a bidding frenzy.

The Salvator Mundi, called the “Last da Vinci” by the auction house, shattered expectations as it drew a circus of multimillion-dollar bids and blasted past the previous record in 19 minutes.

The crowd at Christie’s in New York gasped at the tens of millions of dollars in bids being raised for the painting, as the price quickly blew beyond $US200 million ($272.8 million), according to The New York Times.

Offers slowed as bids dropped from $US10 million increments to $US2 million as the sale price passed $US200 million ($272.8 million) before eventually being sold to Saudi Arabian Prince Badr bin Abdullah for $US450.3 million ($614.1 million).

Salvator Mundi beat the previous record for most expensive artwork by more than $US150 million ($204.6 million), set by Dutch-American painter Willem de Kooning’s Interchange at $US300 million ($409.2 million) in 2015.

Salvator Mundi, Latin for Saviour of the World, depicts Jesus in a blue renaissance dress, making the sign of the cross with his right hand and holding a clear sphere in his left.

Since its sale to the Saudi Arabian prince, many have speculated about the true ownership of the record-setting painting and where it is being held. It has not been shown publicly since the sale in 2017.

The WSJ said the painting was last seen hanging up on the Saudi leader’s yacht in 2020.

The post On This Day: Leonardo da Vinci’s ‘last’ artwork sells for record price appeared first on The New Daily.