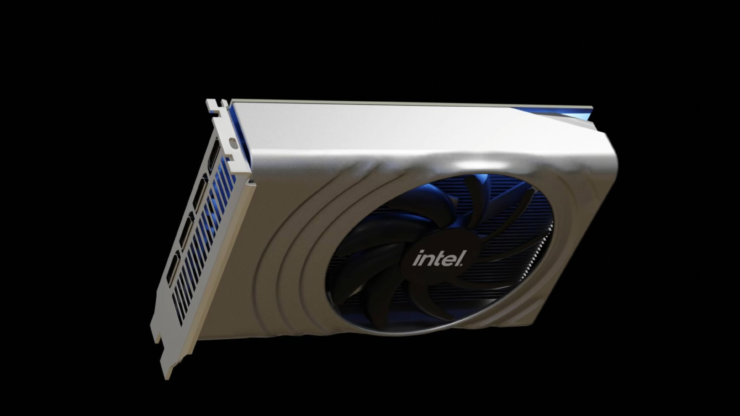 New details regarding Intel’s entry-level ARC Alchemist graphics cards powered by the Xe-HPG GPU architecture have been revealed by Moore’s Law is Dead.

The Intel ARC Alchemist will comprise the top and entry-level segments. MLID already provided in-sight on the 512 EU part so now, we have our focus shifted towards the entry-level lineup that will be launching in Q1 2022 for laptops (Dell / ASUS) and followed with a desktop launch later (Q2 of 2022 as rumored).

The Intel Xe-HPG Alchemist entry-level graphics cards will be based on the 128 EU SKU. The top config is once again a full-fat SKU with 1024 cores in 8 Xe cores, a 96-bit bus interface, & up to 6 GB GDDR6 memory. The core clocks for this specific GPU SKU are expected to range between 2.2-2.5 GHz on the TSMC 6nm process node. 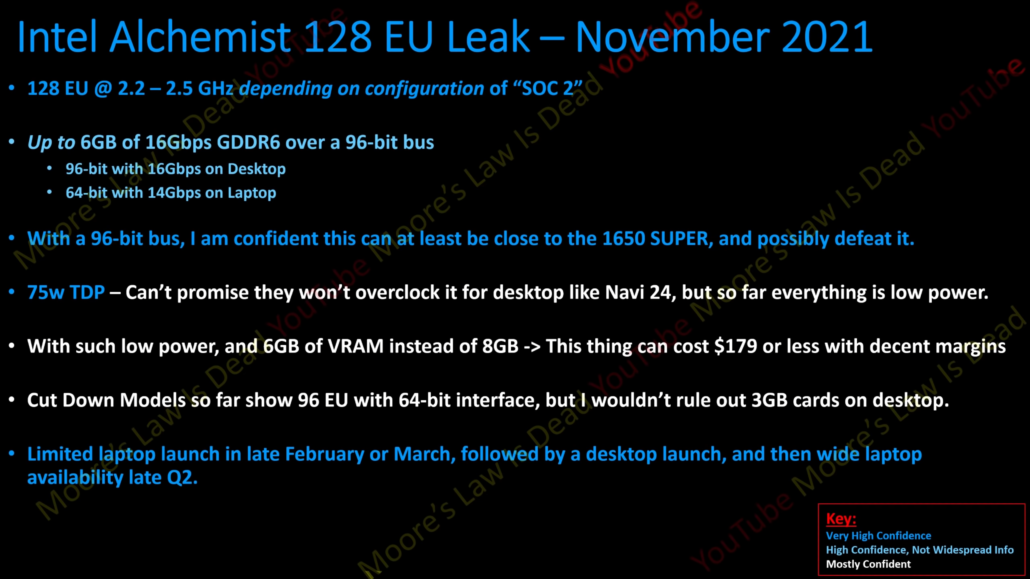 The cut-down variant will come with 96 EUs or 768 cores and a 64-bit bus interface. The card has been rumored with 4 GB GDDR6 memory but the source says we also can’t rule out the possibility of a 3 GB variant. Both cards will have a 75W power consumption which means we will be looking at connector-less graphics cards for the entry-level segment.

Performance is expected to land between the GeForce GTX 1650 and GTX 1650 SUPER but with raytracing capabilities. One big advantage that Intel could have over AMD and Intel is that with these cards, they might enter the sub-$200 US market which has been completely abandoned in the current generation of cards. The GeForce RTX 3050 series only got a laptop release so far with RTX 3060 serving the entry-level Ampere segment at $329 US while the RX 6600 is expected to be AMD’s entry-level solution for around $300 US. There is a  recent rumor that AMD is planning to launch AMD Radeon RX 6500 XT & RX 6400 desktop graphics cards so that might be the first true competition against Intel’s entry-level part.

This GPU will be very similar to the Intel Xe-LP GPU-based discrete SDV board however Alchemist will have a more improved architecture design and definitely more performance uplift over the first-gen Xe GPU architecture. This lineup is definitely going to be aimed at the entry-level desktop discrete market based on the specifications.

Based on the timeline, the Xe-HPG Alchemist lineup will compete against NVIDIA’s Ampere & AMD RDNA 2 GPUs since both companies aren’t expected to launch their next-gen parts by the very end of 2022. NVIDIA and AMD are expected to release refreshes in early 2022 so that might give Intel’s new lineup some competition but based on current performance expectations, the refreshed may not bring drastic performance differences to the lineup. The Xe-HPG ARC GPUs will also be coming to the mobility platform too and will be featured in Alder Lake-P notebooks.

What do you want to see in Intel’s ARC Alchemist Gaming graphics card lineup?