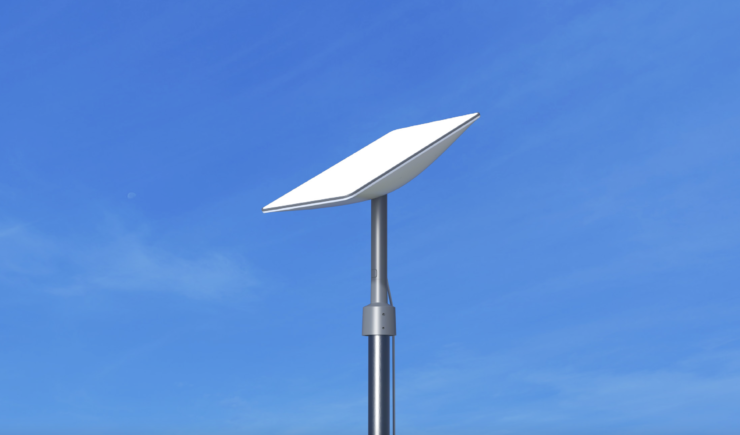 Space Exploration Technologies Corporation’s (SpaceX) Starlink satellite internet service continues to outperform its peers in performance tests. Starlink, which is serving customers all over the globe, uses a constellation of low Earth orbit (LEO) satellites to beam down the internet to its users located in North America, Europe, Australia and other countries. In comparison, its competitors use much larger spacecraft at higher altitudes, which increases the time it takes for signals to travel to them and back to the Earth’s surface.

The latest Starlink speed test was conducted by a user residing in the United Kingdom and shared on the social media platform Reddit. It follows a series of tests that have shown how the internet service comfortably breezes past the 200mpbs marker in internet download speeds.

Reddit user Sparkster_01 shared the results a couple of days back and revealed that the score was the highest he had achieved ever since getting hands on the Starlink router, dish and other equipment. They show that when it comes to downloading speeds, Starlink crossed the 400 Mbps market, by posting 404.3 Mbps in the metric.

It also fared well in other areas, such as upload speeds and latency, which is the time it takes for a packet of information to travel from and back to an internet user. Sparkster_01 was able to touch 18.6 Mbps in upload and 27 milliseconds in latency, both of which are higher than the averages delivered by traditional satellite internet operators. 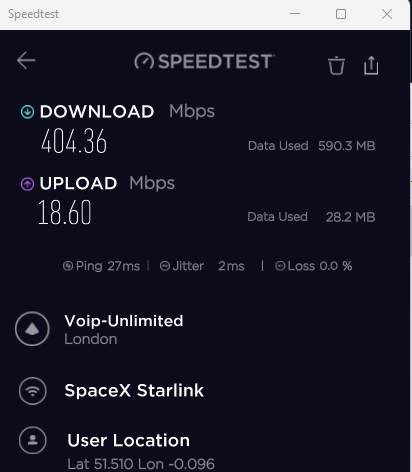 When compared to some of the other high speed Starlink results we’ve covered to date, today’s test falls in third place. The fastest speed we’ve come across so far was reported by a user in Germany, who was able to achieve a blisteringly fast result of 649 Mbps in July this year. This is followed by a test in May, in which another German user reported an eye-popping download speed of 560 Mbps, through a trio of tests all of which crossed the 500 Mbps mark.

Of course, these results differ from the average speeds reported by Starlink users spread all over the globe. Data gathered in July this year revealed that users in the European Union were able to achieve an average download speed of 176 Mbps, while their counterparts in the United States fared slightly worst as 140 Mbps. Those in the U.K were able to achieve a maximum of 150 Mbps.

Starlink speeds are often determined by the number of users in an area and their geographical location. The more users per area, the lower the speeds which also depend on the number of satellites in service for the particular region.

Nevertheless, the internet service’s promise is clear when compared against download speeds delivered by two of its arch-rivals, HughesNet and Viasat. Data gathered by PCMag last year revealed that the two were able to deliver average download speeds of 19.8 Mbps and 24.7 Mbps, respectively.

As of November, the Starlink satellite constellation consists of roughly 1,800 small satellites which are less than one-sixth of the 12,000 spacecraft the Federal Communications Commission (FCC) has authorized SpaceX to deploy. Additionally, the internet service is also fighting its competitors for authorization to deploy an astounding 30,000 second generation satellites with three times the data capacity over the current ones.

If approved, these plans will bring the total constellation size to 42,000 satellites, the largest any entity, public or private, has operated in history. SpaceX has also requested the Commission to let it deploy five million user terminals across the United States, fearing that the number of users that sign up for Starlink can outpace the number of terminals it is authorized to sell.

You can take a look at more Starlink download speed tests below: