Can you even call yourself a collector if you don’t break a few racks in the process? Not according to Philippine-born Carl Chiang, whose hefty Helmut Lang collection caused the poles in their walk-in wardrobe to collapse. “My partner and I were having dinner when I heard this terrible sound,” shares Chiang. “My first reaction wasn’t ‘How are we going to clean this up?’ or ‘The landlord is going to kill us.’ It was ‘Are any of my pieces damaged?’” After a similarly disastrous run-in with Ikea containers, the founder of fashion events and communications agency Archival Toronto has since learned their lesson: Their 130-piece hoard is now supported on industrial cylinders that can hold over 200 kilograms. “I’ve discovered that only metal pipes can sustain the weight,” they say.

In a case of life imitating art, this intersection between style and practicality would be sure to make Lang proud — the designer is revered for pioneering the anti-luxury aesthetic of the ’90s. After launching his eponymous label in 1986, Lang garnered a cultlike status for his ability to blend military and minimalist designs with androgynous styles and bondage accents. He left his label in 2005, but his affinity for representing the LGBTQ+ community lives on through his work, which is what initially mesmerized Chiang. “When I was growing up, sex wasn’t something that you talked about in a conservative Filipino environment,” they reveal. “Many items in my collection lean into Lang’s BDSM references because to me, there is something superfun and supersexy about such a taboo subject. Fashion can bring these subcultures into the spotlight and challenge the heteronormativity of what sex looks like.”

Thanks to their mother’s love of designer accessories, Carl Chiang fostered a passion for fashion at an early age, culminating in their first Helmut Lang purchase — an army-green jacket from the 1999 Astro collection — in 2014. However, it wasn’t until two years (and a move to Canada) later that their obsession exploded as the more centralized location made it easier to connect with sellers and other Helmut Lang aficionados.

Chiang is a true historian. Their Helmut Lang knowledge is unparalleled; they are able to effortlessly identify the year, season and inspiration behind each item in their closet. They take their role as a curator quite seriously, collecting both menswear and womenswear that play significant roles in Lang’s legacy. “I’ve never collected based on what I can wear,” reveals Chiang. “It’s mostly what I think was important to the designer and fun. So if I see a piece from an iconic runway look, I take it regardless of its size or gender.”

Still, the collector insists that the message behind the creations, not the actual garments, fuels their Helmut Lang love affair. The designer’s balance between being referential and humorous makes his clothing a staple in Chiang’s closet. “What continues to strike me is not the construction of his pieces but his ability to communicate an artistic vision,” they say. “It’s his expressionism through fashion that I love.” 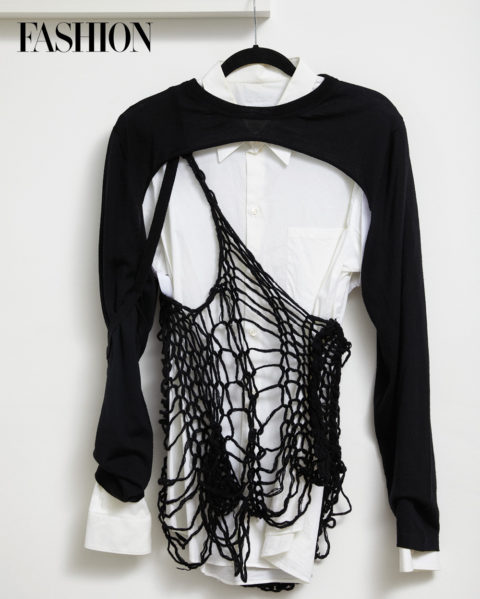 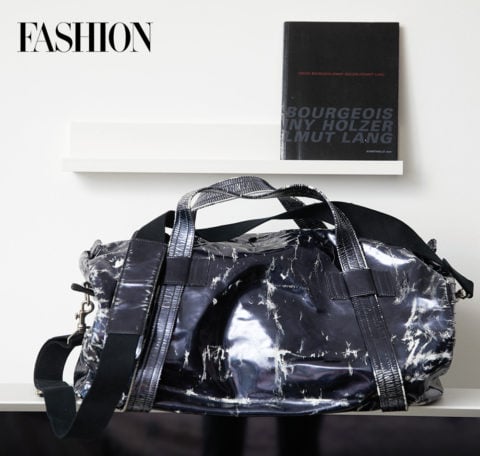 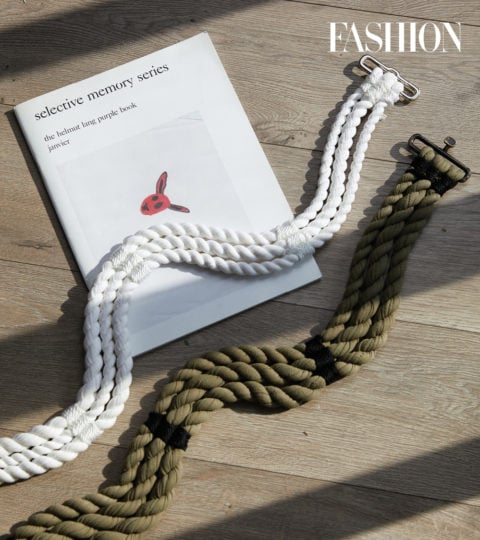 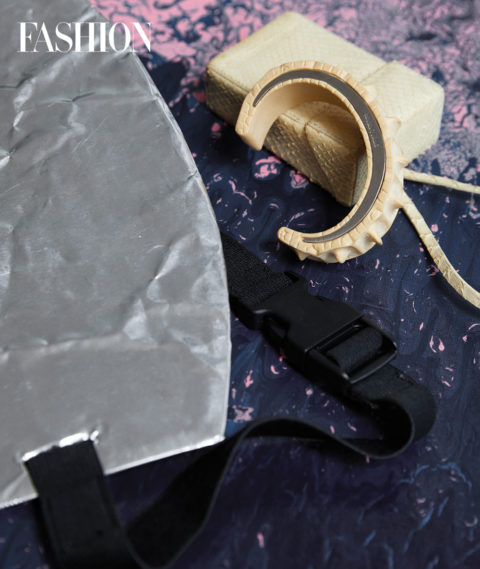 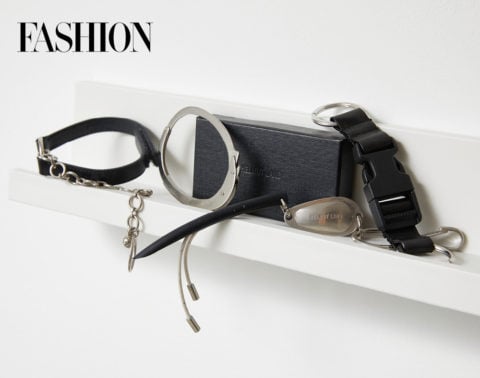 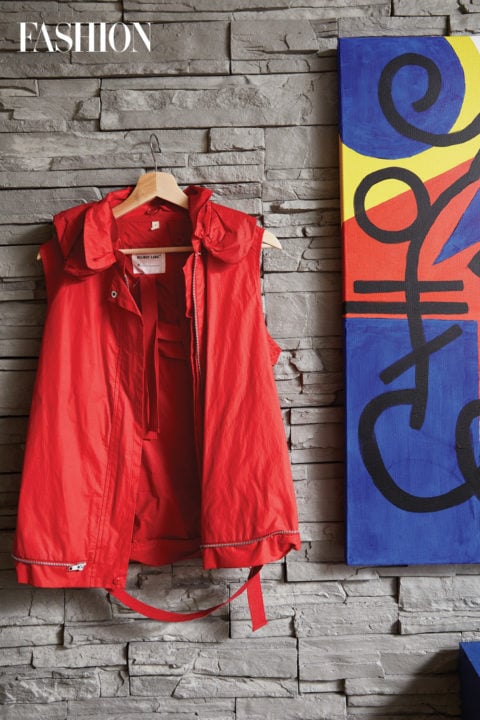 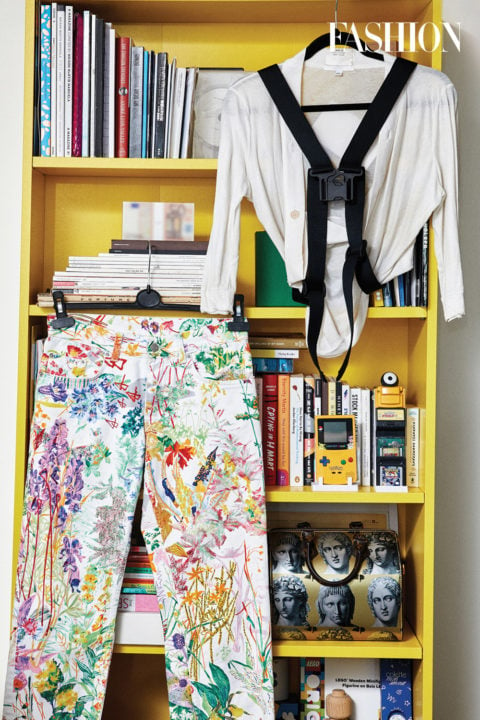 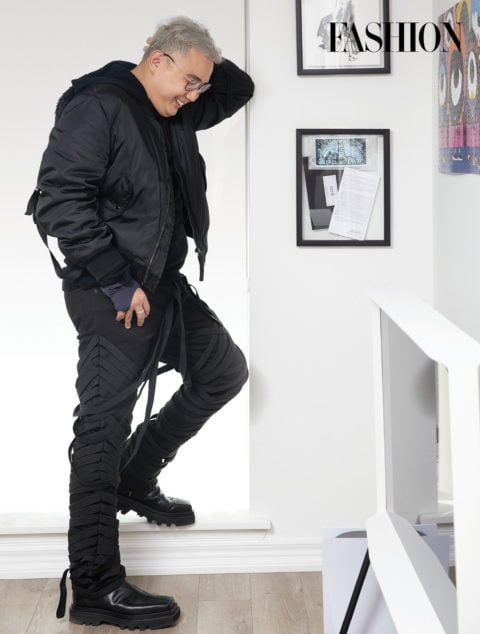 “It gives you a kind of subversive sexiness,” says Chiang of this knit harness. “If you were just wearing this piece and nothing else, it would be very provocative and revealing. But juxtaposing it with a nice button-down subverts that, and that’s what makes Helmut Lang really fun.”

“I grew up loving bags because my mom was obsessed with them,” shares Chiang. “She actually replicated the closet from the Sex and the City movie, and it’s filled with accessories. So a lot of my collection consists of purses because I grew up around them.

“Lang heavily influenced Hedi Slimane’s time at Dior Homme, and that’s where I was first exposed to Lang’s work,” says Chiang of this book, which features a letter Slimane wrote to the designer early in their careers.

Chiang applauds not only Lang’s subversion of
gender norms but also his referential designs.
“This silver belt is supposed to resemble a
championship belt found in wrestling,” says
Chiang. “So it’s really fun to see him playing with
the hyper-masculinity of the sport.

Chiang has several womenswear garments from Helmut Lang, including this red vest, which they bought for their mom to wear when she visits from the Philippines. What makes it a particular favourite, besides the family connection? “It comes with a built-in travel pillowcase around the collar,” says Chiang.

This blouse is a rare eBay find; it’s one of the few items that survived the Helmut Lang studio fire in 2010. Chiang says they’re very lucky to have found it: “There are samples that no one will ever see because they were destroyed.”

“I usually dress monochromatically, but I also like presenting myself in a very clean way,” shares the collector — hence this all-black all-Helmut Lang ensemble.

This is article first appeared in FASHION’s Winter 2022 issue.

The post This Collector is Bringing Helmut Lang’s Sexy Back appeared first on FASHION Magazine.