Disney+’s awesome “GroupWatch” functionality is a co-viewing feature that lets you connect with friends and families to watch movies and shows from the entire Disney+ library, even when apart. GroupWatch lets up to seven people watch together in synced playback that you can access via web, on Disney+’s mobile platforms, on connected TV devices, and through smart TVs.

Disney+ GroupWatch participants must all be in the same country. Kid’s profiles cannot participate in a GroupWatch. With the exception of PS4 and selected Roku models, Disney+ GroupWatch is available across a wide range of devices and platforms, including mobile devices, web browsers, game consoles, set-top boxes, and smart TVs (click here for a full list of Disney+ supported devices).

How to begin a Disney+ GroupWatch viewing party

As above, as long as you are a Disney+ subscriber you can get your viewing party started by selecting a title, then tapping or clicking on the GroupWatch icon found on the “Details” page of series and movies. This GroupWatch icon is represented by three figures in a circle. 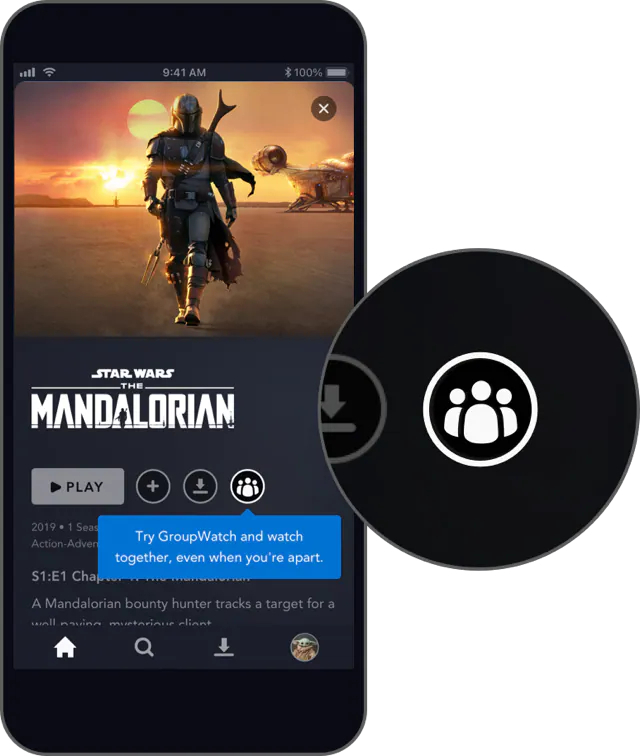 This will generate a URL link to invite up to six other people (who, again, also have to be Disney+ subscribers) to watch along. You can send people the link via text or email, or, if you’re on a mobile platform, you can share via social media. The original invitations must be generated from a mobile device, such as a phone or a tablet, or from the web. 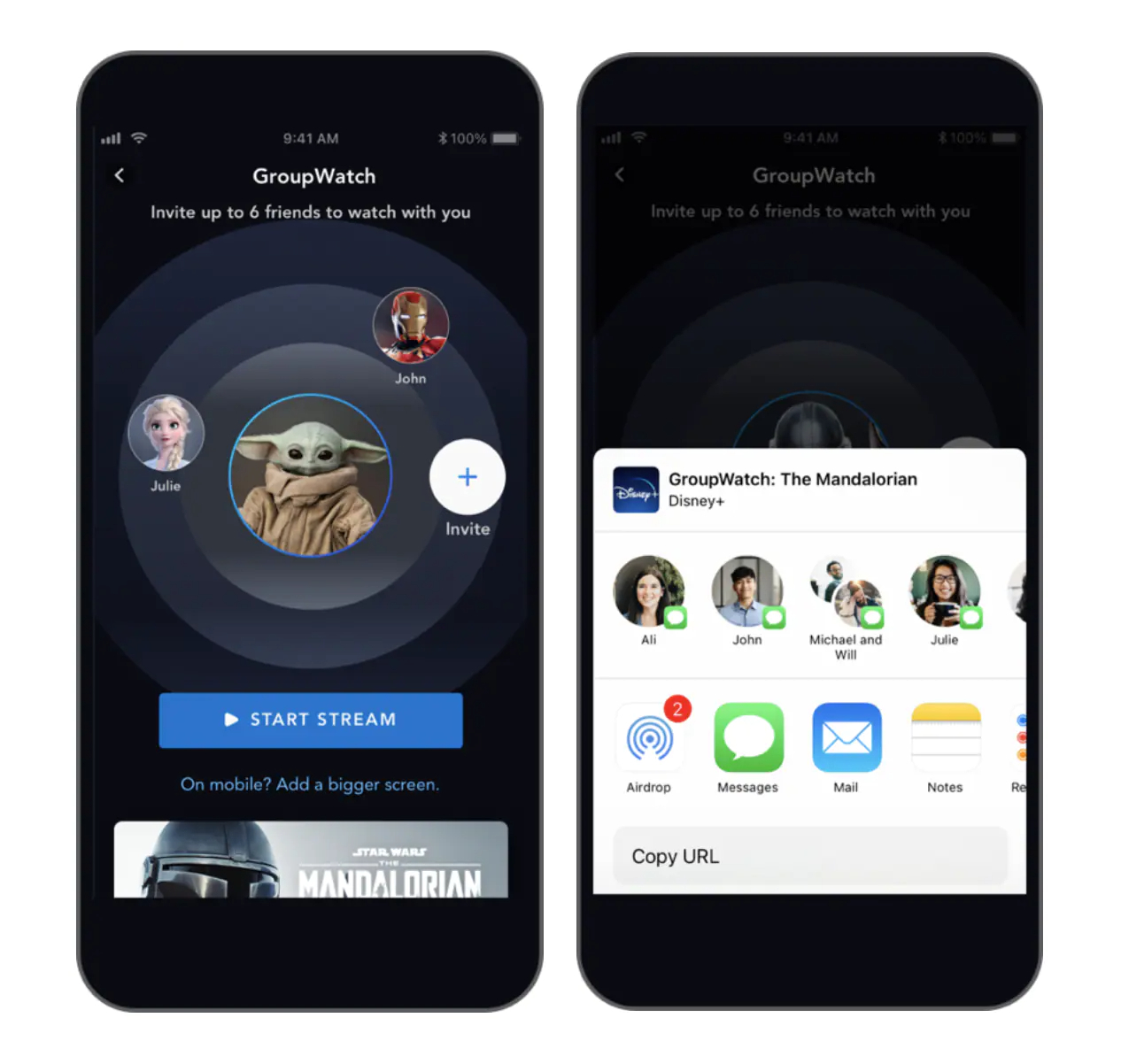 Once generated, hit “Start Stream,” and you and the invitees can then watch from mobile devices, connected TV devices, or a smart TV. Don’t forget the popcorn!

During the GroupWatch, anyone can pause, fast forward, or rewind. If you haven’t hit your invite limit, the person who initiated the GroupWatch session can invite more people at any point by coming out of the player and tapping the plus-sign invite icon.

How to activate an invite to a Disney+ GroupWatch viewing party

You can accept a Disney+ GoupWatch invite through the Disney+ app or on DisneyPlus.com by searching for the title of the content. On the title page, select the GroupWatch icon. Select “Join Stream” and follow the prompts.

Once you’ve accepted the invite, you can switch to a connected TV to watch on a larger screen by opening Disney+ using the profile that accepted the link and selecting “Join Stream.”

How to react with emoticons during a Disney+ GroupWatch session

While watching, you and the other viewers can communicate in real time with six different emoji — “like,” “funny,” “sad,” “angry,” “scared,” and “surprised” — by selecting them in the Disney+ app or on the website. 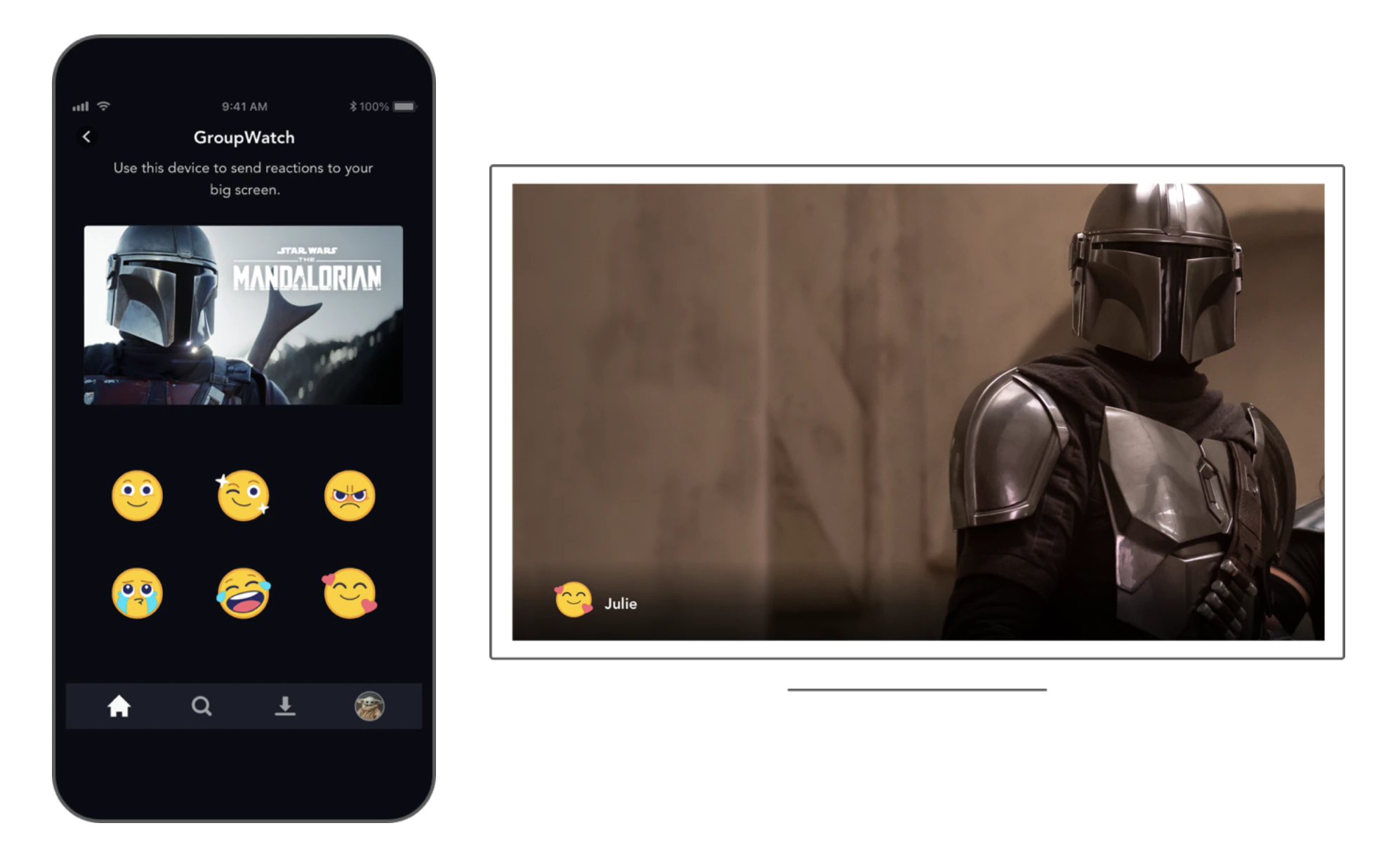 Using either method, your chosen emoticon will appear at the bottom of everyone’s screen with your Disney+ profile name next to it.

How to end your participation in a Disney+ GroupWatch viewing party

If you need to stop watching before the title has ended, simply select “Leave GroupWatch.” Everyone else’s stream will continue without you until the title ends or everyone clicks that button.

A beginner’s guide to YouTube TV, a live TV app with over 80 channels and unlimited DVR