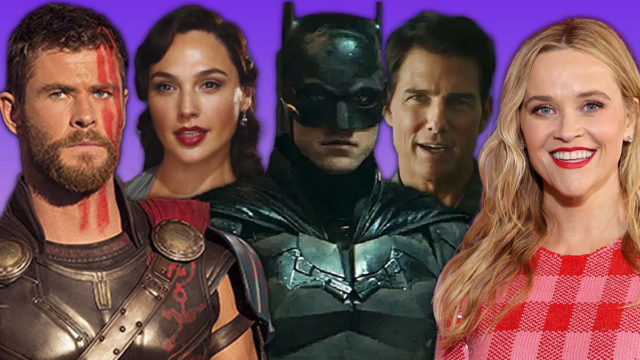 It’s fair to say that the next 12 months of make-believe is going to be next level, with not only a handful of highly anticipated blockbusters and sequels, but dozens to choose from on our playlist.

And don’t forget the suite of indie flicks slated for the world’s top film festivals.

With the global pandemic forcing the reshuffle of big-budget Hollywood movies including Top Gun, Avatar 2 and The Batman, we can now easily plan the year ahead.

To help you, TND has curated a list of more than 50 films down to a sweet monthly selection including high drama, spy thrillers, animation, more angry dinosaurs on the loose, horror and revenge thriller.

In particular, keep an eye out for Australian director Baz Luhrmann’s untitled Elvis bio-musical, which will finally get some love on the big screen in the new year.

After a string of coronavirus setbacks, production delays and Warner Bros not rolling the dice on a release date, Luhrmann finally gave us some good news.

“Made a little something to let you good people know we are taking care of business on June 24, 2022,” he wrote.

Starring A-listers Jessica Chastain, Lupita Nyong’o, Diane Kruger and Penélope Cruz, this spy thriller evolves around a group of international agents who band together to recover a top-secret weapon from a dangerous mercenary.

They have a common enemy and they plan on stopping World War III.

A semi-autobiographical film set in 1960s Belfast, this heartwarming comedy-drama has been the talk of the town for its dozens of award nominations and gongs.

With veterans in front of the camera of Wes Craven’s meta horror franchise including Neve Campbell, Courteney Cox and David Arquette, rest assured history will probably repeat itself in this long-running film series.

Who doesn’t love a rich-marries-poor rom-com?

There’s always tears and abandonment and choices to make.

The official synopsis reads just as I had hoped: “After a falling out with her rock-star fiancé moments before their Madison Square Garden wedding, a pop superstar (Jennifer Lopez) marries a complete stranger (Owen Wilson) from the crowd in retaliation.”

Death on the Nile

Kenneth Branagh directs and stars in this Agatha Christie adaptation as he takes another turn playing Detective Hercule Poirot.

Branagh played Poirot in Murder on the Orient Express in 2017 – and Gal Gadot is along for the ride this time so all will be wonderful.

Fun fact: The film, which is based on the popular game franchise, floated around in development for a decade.

But that’s OK, I’m sure these three musketeers will bring joy to all who watch.

Here’s where it gets interesting.

Robert Pattinson as Bruce Wayne gets to fill the void after Ben Affleck and the long list of leads right back to Adam West.

Planet of the Apes director Matt Reeves runs with a darker plot on this one, alongside an impressive cast that includes Colin Farrell as the Penguin, Paul Dano as the Riddler and Jeffrey Wright as Commissioner Gordon.

Directed and co-written by Robert Eggers, who brought us The Witch and The Lighthouse, this movie is about a Viking prince out to avenge the death of his father.

Keen to see Björk, who makes only her second movie appearance in 22 years. Kidman will give her some tips.

Red alert. Your movie diary is full for May, with four fantastic flicks on offer.

Keanu Reeves is back as an assassin, and rest assured the action sequences know no bounds.

Does he ride a Kawasaki GPZ 900R motorbike again at the Fighter Weapons School?

Does he go head to head with a MiG and get Goose’s descendent to take a Polaroid, or fall in love with another instructor called Charlie?

It’s a May release, so that should be enough of a buffer to enjoy her in this comedy franchise.

Jennifer Coolidge (The White Lotus) is returning and that is all that matters.

Doctor Strange in the Multiverse of Madness

It’s probably a reasonable observation that Benedict Cumberbatch will be more enjoyable on the big screen in this flick than in his sombre performance of charismatic rancher in The Power of the Dog.

Elizabeth Olsen (WandaVision) is joining on the fun too.

Rotten Tomatoes reports anticipation “is high for this entry in the Marvel Cinematic Universe – the first of three in 2022 – that will directly tie in with the events in Marvel’s first Disney+ series, WandaVision“.

The sneak-peek trailer has fans guessing its centred around the chapter of his life in 1970.

Not only does our planet need to co-exist with COVID-19 variants, we apparently need to learn to live with dinosaurs, too.

That’s according to Jeff Goldblum in the last chapter of the Jurassic film franchise.

Good news is the cast is same, same.

With a reimagined version of David Bowie’s iconic song Starman to set the scene, we see the real Buzz as a brave, fearless astronaut before he became a toy.

Voiced by Chris Evans (MCU’s Captain America), please pencil this one in for the school holidays.

We’ve all been waiting and seen set shots from the Gold Coast with Chris Hemsworth and Christian Bale.

Now all we have to do is sit back and enjoy Marvel’s second film of 2022, the follow-up to Taika Waititi’s Thor: Ragnarok.

Natalie Portman’s Jane Foster will return to the franchise, and it has been teased that she will wield Thor’s hammer, Mjolnir, at some point.

Fantastic Beasts: The Secrets of Dumbledore

Set in the lead up to World War II, Eddie Redmayne returns as the inquisitive wizard Newt Scamander in this third chapter of the spin-off/prequel series set decades before Harry Potter attends Hogwarts.

We were bracing ourselves for a November 2021 release, but at least we’re still getting another Tom Cruise action flick to fill out our movie calendar.

It’s his seventh instalment – what a trooper.

Makes it all worthwhile hiring that mega-ship to house his cast and crew during COVID-19, to keep everyone safe.

September – have a rest, its AFL and NRL finals time

Ant-Man and The Wasp: Quantumania

Everyone loves Paul Rudd as the Ant-Man, and here’s a little known fact … he’s one of the few superheroes to get an entire standalone trilogy.

Evangeline Lilly also suits up for the ride.

Apparently the release date isn’t official, but Marvel supposedly has October pencilled in for this release.

Spider-Man: Across the Spider-Verse (Part One)

This animated feature (won an Oscar) was hugely popular with critics and audiences alike, so be prepared to enjoy more Spider action.

All praise Jamie Lee Curtis. She’s been Scream Queen since she was a 19-year-old actor trying to find her way in Hollywood.

She’s done so much more during her five decades in front of the camera, and all we hope is that her character Laurie Strode – please, please –  finally defeats the evil Michael Myers.

Speedster Ezra Miller as Barry Allen is back, this time branching out from his TV series to the big screen.

IMDb reports Michael Keaton and Ben Affleck are part of the cast, presumably as Bruce Wayne/Batman and Affleck … as Batman as well.

Too soon to guess a plot? Let’s wait.

Letitia Wright, who plays T’Challa’s sister Shuri in the 2018 blockbuster along with Lupita Nyong’o, Angela Bassett, Winston Duke and Martin Freeman, are back on the credits list.

Variety reports this animated flick “centres on the legendary Clades, a family of explorers whose differences threatened to topple their latest and most crucial mission”.

On Instagram, Disney Animation says the film “journeys deep into an uncharted and treacherous land where fantastical creatures await”.

Aquaman and the Lost Kingdom

And welcome back Jason Momoa. We’ve missed you as DC superhero Aquaman.

Amber Heard as Mera is also back, as is Nicole Kidman, and while the plot is still a secret, we know filming wrapped in Hawaii on December 9 thanks to a Momoa Insta post.

They now have a family on Pandora, which is great news.

Kate Winslet, Michelle Yeoh and Edie Falco are among the new additions to the cast.