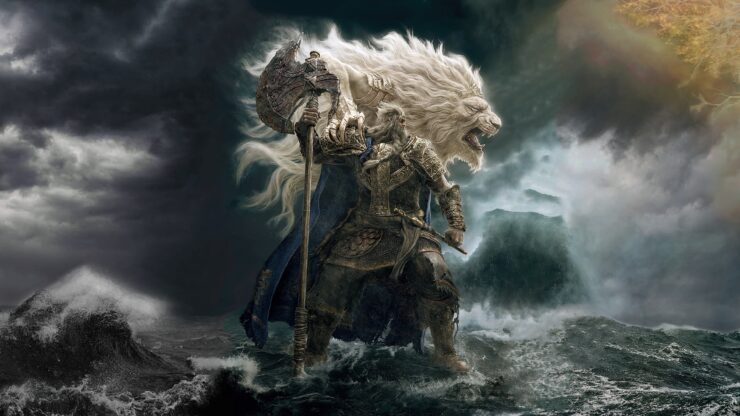 Elden Ring director Hidetaka Miyazaki talked a lot about the upcoming open world action RPG, one of 2022’s most anticipated games, in an interview published on EDGE #367.

To begin with, we learned of the main influences that played some part in the creation of Elden Ring. Whereas anyone could easily draw a comparison with Tolkien’s magnum opus even from the titles alone, Miyazaki-san’s mention of Moorcock’s The Eternal Champion series of novels (which will get its own game adaptation focused on Elric of Melniboné) is far less obvious.

It’s difficult to give any one single inspiration that had a major impact on Elden Ring. There have been a lot of different works that influenced the creative process in various ways – The Lord Of The Rings, The Eternal Champion series of novels by Michael Moorcock, aspects of tabletop RPGs such as RuneQuest, etc. There are a lot of motifs and themes that I was able to pick from these various works that had an effect on the development of Elden Ring.

Miyazaki then spent a big part of the interview discussing the creative process with A Song of Ice and Fire creator George R. R. Martin. He called the mythos created by GRRM a ‘constant source of inspiration and impetus’, and ‘the biggest departure’ from the Dark Souls series that allowed him to build something fresh.

The Elden Ring director said he and other FromSoftware developers traveled to GRRM’s hometown to meet with the famed author. Despite the age difference, Miyazaki eventually came to think of Martin as an old friend of sorts and was thrilled to work with someone just as passionate for fantasy worlds.

Miyazaki also revealed why George R. R. Martin only worked on Elden Ring’s mythology. FromSoftware apparently felt that working directly on the story and the in-game text would have actually limited the writer’s creative potential. The resulting themes were mainly about connections between characters, such as parent and child relationships.

The magazine’s cover was dedicated to a specific Elden Ring character, Godfrey, whom you can see in this article’s featured image. Miyazaki unveiled many details about him, explaining that this character has a major presence in the story and represents a lot of the game world itself.

When we were talking with George Martin, we had these themes and ideas for creating pieces of artwork for the bosses, for these core characters of the story. And when he wrote the mythos, we asked him to create these dramatic heroes of this ancient mythos that takes place before the events of the game. These dramatic and heroic characters weren’t really present in our previous titles, so this is something that was really appealing to me – how he would depict the mystique and heroic qualities of those characters. And Godfrey is sort of an embodiment of that. He’s one of the major players in the game. One of the motivations of the player character in Elden Ring is to become Elden Lord – they’re to journey to The Lands Between and become the next Elden Lord.

In the sort of heyday of the Golden Order of The Lands Between there were two Elden Lords, and Godfrey was the first of these. He was the very first Elden Lord and was married to Eternal Queen Marika, who’s been detailed in some of the lore we’ve released publicly so far. And he was representative of this period of grandeur and affluence. He represents everything great about the Elden Ring and about The Lands Between at that time. Eventually, he was exiled from The Lands Between. He himself became tarnished and he shares this deep connection with the Tarnished – the player character. Godfrey is an embodiment of their long history and struggle. He represents a lot of what the player character stands for and he symbolises a deep connection with the player – something that used to shine brilliantly and has now become tarnished and fallen from grace.

Elden Ring launches on February 25th, 2022, for PC, PlayStation 4, PlayStation 5, Xbox One, and Xbox Series S|X. Miyazaki briefly touched upon the short one-month delay, too, stating that the level of freedom available in the final version of Elden Ring exceeded what they had initially planned for, thus requiring more time in debugging and quality assurance.

The post Elden Ring Was Influenced by Lord of The Rings and The Eternal Champion; Godfrey Character Explained by Alessio Palumbo appeared first on Wccftech.