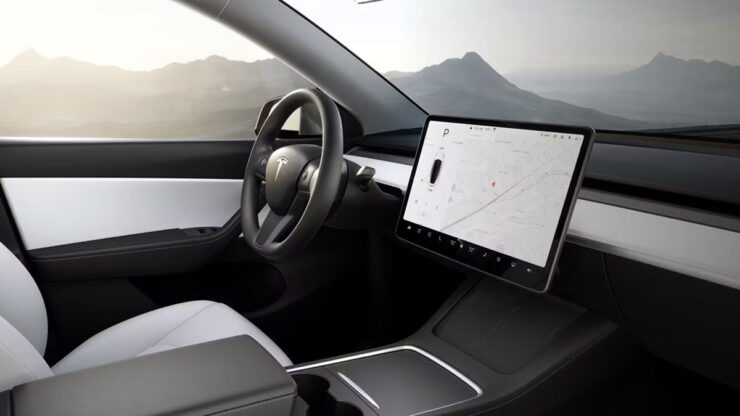 On Tuesday, it was revealed via Teslascope (@teslascope on Twitter) that the 2022 Tesla Model 3 and Model Y vehicles are expected to be equipped with new next-gen AMD Ryzen chips for their MCU3 Infotainment Computer, replacing the current Intel Atom A3950 chips in previous models.

Previously this year, Tesla released their Model S and Model X autonomous vehicles with AMD’s RDNA2 chips for their infotainment system. The Navi 22, Navi 23, and Navi 24 GPUs were expected to be in the two Tesla models, replacing the previous Intel chips.

The first Model 3 and Y vehicles with MCU3 (Infotainment Computer with AMD Ryzen) are now being produced and delivered in North America! pic.twitter.com/BHbpyKr78D

TESLA claims that their infotainment system allows for up to 10 TFLOPs of processing power which is on par with current-generation consoles such as the Sony PS5. The infotainment system comes with wireless controller compatibility and lets you game from any seat. And while TESLA doesn’t mention any specs of this particular system, the hardware scene has a sense of what could be under the hood of the latest TESLA model S.

The Tesla Model 3 and Model Y vehicles originally shipped for a European market release, and on top of being equipped with the AMD Ryzen chipset for the new models, they are also anticipated to have a brand-new 12V Li-ion battery in the new 2022 models. Next year, Tesla will ship the Model 3 and Model Y to US markets.

The expectation on performance is high, with the newer AMD chipset and new 12V Li-ion battery to perform more efficiently and effectively for consumers, while offering a premium driving experience with the new changes. Elon Musk has mentioned that the infotainment system is comparable to a PlayStation 5 system, and has boasted that it can play Cyberpunk 2077.

Tesla prides itself on its center display, offering an experience like no other vehicle on the market. It is reported that their vehicles are built around the infotainment system, which would stand that the introduction of the more efficient AMD chipset would benefit all users.

Previously, Tesla had failures due to the older 12V battery in their vehicles. There are reports stating that older battery chemistry is used for their battery to power the vehicle. It is unknown if this new battery will perform better, or will offer the same issues as the previous power option.