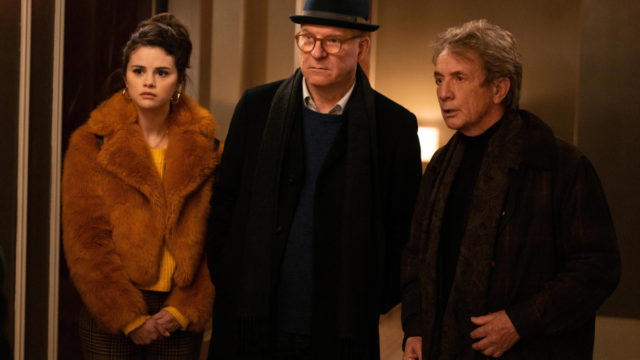 Although the pandemic turned 2021 into another bin fire of a year, it did offer a handful of brilliant TV shows that took our minds off, well, everything else.

From delightful whodunits to … violent takes on capitalism, at least 2021 didn’t let us down when it came to entertainment.

So as we wait for a new crop of TV shows to enthrall us this year, here are 11 of the best shows to come out of 2021.

From one of the most infamous brawls in NBA history to how a mobster bought a hockey team for his 17-year-old son, Untold isn’t your average sports documentary.

I highly recommend Untold: Breaking Point, which traces Mardy Fish’s unorthodox tennis career and how his mental health struggles manifested on and off the court.

Born from the success of the original 2014 New Zealand film, directed by Taika Waititi and Jemaine Clement, the series of the same name is a spin-off set in America.

The mockumentary follows the lives of four vampire roommates and a ‘familiar’ (human slave) as they go about their lives. It’s very silly and light and the sort of content you switch on when you need to laugh.

The Emmy-nominated series was renewed for a fourth season before its third one even premiered.

Things are bleak for detective Mare Sheehan (Kate Winslet), who is just trying to keep it and her family together. But an unsolved missing case is her constant shadow in a small town that doesn’t forget. And then another body is found.

Mare of Easttown is a heavy watch but the strong writing and acting, especially from Winslet, makes it very much worth it.

In 2020, Ted Lasso was the lockdown show for many, a series about eternal optimism and kindness. Season 2, in my opinion, was just as good. It was more fleshed out and gave us a deeper insight into who our main characters are.

Reservation Dogs follows the lives of four Indigenous teens in rural Oklahoma with California dreams. After the death of a close friend, the quartet is even more determined to leave Oklahoma behind. So they embark on a minor crime spree, heisting to raise money for their trip.

The series was co-created by Taika Waititi and Sterlin Harjo.

After it was nominated for best comedy series at the Golden Globes, Reservation Dogs was renewed for a second season.

Without spoiling anything, Succession centres on the charming Roy family, owners of a global media and entertainment conglomerate. Some of the Roy children, however, wouldn’t mind seeing the family’s patriarch, daddy dearest, fall to his knees.

Succession has been renewed for a fourth season, which is a major achievement in the competitive world of online streaming.

The South Korean series took over the world for a time, pulling people’s attention away from the doom and gloom of the pandemic and fixing it on a disturbing, albeit enthralling, take on capitalism and inequality.

Squid Game‘s unflinching comfort with brutality was nothing new to our screens, but its method of death by playground games was certainly something.

An Australian version would undoubtedly feature the sadistic beep test.

Hwang Dong-hyuk, the director, creator and writer of Squid Game, said he is considering a second and third season.

I can’t quite think of another show that made me gasp the way The White Lotus did, and that includes Squid Game.

Put simply, The White Lotus is a whodunit set in an idyllic hotel in Hawaii. But it’s also a social satire exploring the subtle exploits of the hotel’s employees and guests. There are very few likeable characters in this sometimes painful series and the worst part is you might relate to some of them.

Unsurprisingly, White Lotus has been renewed for a second season. It also received nominations from the Golden Globes and Critics Choice Awards.

3. Only Murders in the Building (Disney+)

‘Delightful’ isn’t usually a word I’d use to describe a whodunit series, but that’s exactly what Only Murders in the Building is.

Charles (Steve Martin), Oliver (Martin Short) and Mabel (Selena Gomez) live in the same grand apartment complex in New York. Apart from living in the same building, the only other thing they have in common is a love for true crime podcasts.

When someone in their building mysteriously dies, Charles, Oliver and Mabel set out to discover the truth.

Only Murders received a slew of nominations from both the Golden Globes and Critics Choice Awards and has been renewed for a second season.

WandaVision felt like a departure from what Marvel is best known for, which is to say lots of bright lights and bang, bang. There was, of course, lots of bright lights and bang, bang, but WandaVision was also a tightly written exploration of grief and loss, following the events experienced by both Wanda (Elizabeth Olsen) and Vision (Paul Bettany) at the end of Avengers: Infinity War.

Wanda’s grief manifests in numerous ways throughout the nine-episode series, something she desperately holds on to in an attempt to avoid her reality.

As Vision said, “What is grief if not love persevering?”

Mike Flanagan is the sort of person who creates films and TV shows that keep you up at night – not from his trademark jump scares, but from good old existential fear. Case in point: Midnight Mass.

The seven-episode limited series is a deeply affecting tale of faith in a small town island community, where a visiting priest leads to unexplained miracles.

Religion as a theme isn’t anything new in Midnight Mass or the horror genre, but what does get you is the deeply human struggle of the faithful and doubting.

It is a slow burn, but it will stay with you.

The post From whodunits to vampires: <i>TND </i> ranks the best TV shows we watched in 2021 appeared first on The New Daily.