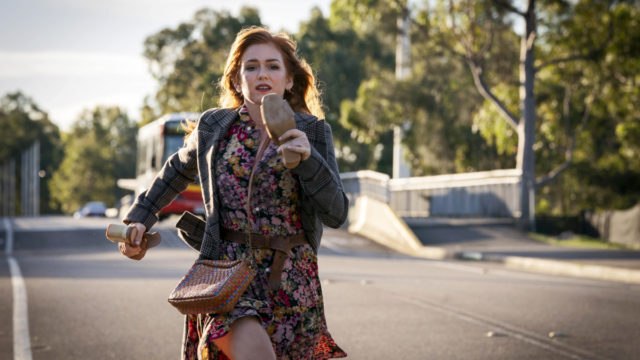 Off the back of a record $1.9 billion spend last year on local and foreign film and television productions, it’s time to reap the rewards and cash in via our screens to watch crafty, original series.

We are only two weeks into 2022, and we’re seeing hit shows premiere on streaming services, filmed entirely on location in user-friendly states such as South Australia and New South Wales.

According to a statement from Screen Australia to The New Daily, this is only the beginning of a long and fruitful year.

“There’s a lot for audiences to look forward to, with Baz Luhrmann’s latest film [the Elvis biopic] having wrapped, The Lost Flowers of Alice Hart in production, season two of Upright on the way and plenty more to come.

“Australia has a strong reputation as a leading destination for international productions, thanks to our stunning and diverse physical locations, our talented and hard-working cast and crew, and our world-class facilities.

“On top of this, we have some of the most competitive support frameworks in the world for domestic and international production,” the statement read.

A joint BBC production in association with the South Australian Film Corporation and HBO Max, director Christopher Sweeney said the “thrilling, funny and clever” script of The Tourist leant itself to being filmed remotely, and what better backdrop than the Australian outback.

“The visuals in Australia are remarkable,” he said.

“We may not achieve 90-plus [productions] again next year as this was an unparalleled period of growth for the industry, but the industry is likely to have another bumper year,” Dr Ryan said.

“The reason being that Australia, and specific states in the country including Queensland and to an extent New South Wales, were safe havens for film and TV production during the pandemic and both states have significant crews and production facilities capable of supporting high-end production.

“If the pandemic continues to rage it is highly likely that companies will continue to divert their production to these safe havens,” he said, adding that insiders tell him studios who’ve already made content here have already locked in future production.

Dr Ryan also said “all indications are that the government will want to continue supporting the industry to cash in on this growth”.

The official synopsis for Fisher’s Wolf Like Me says it’s a “gender-bending heartfelt drama” produced by the same team behind Nine Perfect Strangers (filmed in Byron Bay) and Big Little Lies.

Written and directed by three-time AACTA Award nominee Abe Forsythe (Little Monsters) and filmed across western Sydney and regional NSW, the story was inspired by his experiences searching for love as a single parent.

“Wolf Like Me is a very meaningful project for me. The stakes are extremely high but grounded by things we can all relate to,” Forsythe said.

“I’m so excited to have Isla and Josh on board and I know the audience will be surprised seeing them in a different way as these characters.”

Married to UK comedian and actor Sasha Baron Cohen (Borat), with whom she has three children, Fisher, 45, took to Instagram on Monday in a photo with her dog to remind people to set their clocks.

Stan’s chief content officer Nick Forward said the production would shine a light on Australian content and expand on Stan’s partnership with NBCUniversal and US streaming service Peacock.

Screen NSW says the production was expected to bring in $28.8 million in production expenditure to the NSW screen industry and support more than 160 jobs for local cast and crew.

Meanwhile, Dornan, who finds himself in a “sleepy one-horse” South Australian town with no memory and no idea why he’s there, stars alongside Australian actor Danielle Macdonald, a junior police officer trying to help him find his way.

Sweeney said it was “important that the show is set in the outback because there aren’t that many places in the world that are as isolated as the Australian outback, both geographically and visually”.

“This person, The Man, who wakes up in the middle of nowhere and doesn’t remember who he is – the way to make that person feel most isolated is to set it somewhere like the Australian outback.

“Plus, it’s not seen on film as much as places like Utah and big American deserts, so it felt like a really fresh and interesting way to do it.

As Sweeney reveals, he loved the script as the characters were “brilliantly unique, quirky  and strange”.

“It reminded me a lot of films like No  Country for Old Men [Tommy Lee Jones] and Three Billboards Outside  Ebbing, Missouri [Frances McDormand]. It has this incredible, very specific  quality that I just thought was very unique.

“This felt a bit like a  western, but it has its own quality of also being  set in Australia and the visuals in Australia are  remarkable, so that came to life. We asked, what  would it be like if we did that western look but  put it in Australia?” he said.

Dr Ryan said series such as The Tourist and Wolf Like Me “are an attempt to produce quality television or prestige television that combine cinema and television genres, that have high production values, star high-calibre actors that are internationalised for product global audiences”.

He said the main studio facilities on Gold Coast, Melbourne, Sydney and Adelaide also offered up unique locations that are iconic landscapes.

“And also a diverse range of locations that can be made to appear as universal landscapes.”

The Stan Original Series Wolf Like Me premieres on January 13

The post Why Australia continues to be a honeypot for local film and TV productions appeared first on The New Daily.