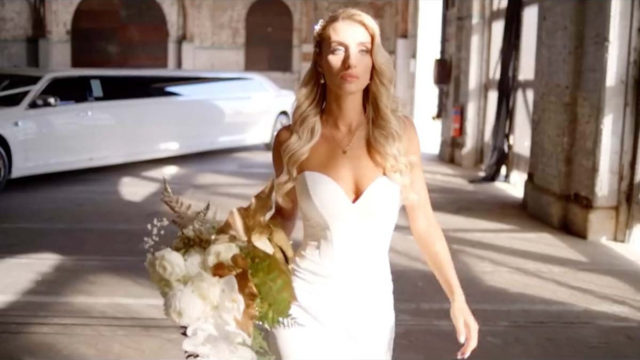 In the first teasers leading up to Australia’s so-called biggest social experiment that is the reality TV juggernaut Married At First Sight, we see glamorous brides in floor-length designer gowns, staring down excited grooms desperate for everlasting love.

“I’m looking for that person who sets my soul on fire,” says one ‘brand new’ stranger with an American accent.

All good so far.

Then the curtain is pulled back ever so slightly … to reveal expert hosts telling newlyweds to “suck it up”, the words “repulsive” and “psychopath” get splashed around, there’s a walk out, an explosive dinner scene, and the inevitable emotional meltdowns with tears and tissues.

All this in a 2 minute 15 seconds video released by the Nine network on Twitter on January 10 for the ninth season of the show: “The rockiest road to love is here.”

Perth-based mother of two (Frankie and Grace) Tracey Jewel Constable, 39, knows first hand what it’s like to be front and centre on the show and it’s creating flashbacks after her “rollercoaster” ride with groom Dean Wells during the 2018 season.

“Arrrghh, it brings back memories!” she tells The New Daily.

“I know how they must be feeling worried about how they are going to be portrayed.

“It’s sad how many of us were just set up to fail with opposite and opposing partners to trigger drama and that’s all MAFS has become!

“It’s a one in 20 shot now of being the couple for the happily ever after. The rest of us are just there for the s–t show!” says Constable, who is now happily married to Nathan, and is an author and life coach.

“‘Reality TV’ is typically anything but, and is often choreographed or designed to increase high and sustained amounts of stress among participants to provoke emotional responses audiences are drawn to, such as fighting and emotional breakdowns,” she said.

“While it is great that some have gone on to live happy lives because of their experience, it is not surprising many develop mental health issues as a result.”

For ordinary citizens Constable and Wells, audiences were already making judgments about the couple before the show even went to air, with Wells rapidly becoming the most hated man in the country.

The official promotional MAFS campaign featured a seated, blindfolded Wells, who was cherry picked by producers at his local Manly pub in Sydney, with a voiceover saying: “Wants to be loved, honoured and obeyed”.

His face was on every billboard, TV commercial, website and on broadcast screens throughout the Australian Open that year.

He was warned by producers as to what was coming, but it proved to be devastating for him: “This word ‘obey’ would become my catchphrase. It became associated with me.”

Wells told the ABC’s Background Briefing special investigation last year he should have chosen his words more wisely in that initial interview for the show, but he claims he never said the word “obey”.

“Everything else, I take full responsibility for.”

It was too late. Friends and family were frantically calling him, and the rest is history, setting a low benchmark for reality television and sending a message to future contestants to watch their backs.

Constable says: “I was shocked at the promos of Dean being projected as this alpha male misogynist. I mean the guy has some strong, interesting views but he never disrespected me, so I was very surprised at the length the producers went to portray him so badly.

“I struggled with the feedback of me being this weak girl with no self worth for taking him back (after a cheating scandal with another ‘wife’ Davina Rankin).

“I believed everyone deserves a second chance after cheating, but I struggled with Australia’s reaction to this and us as a couple. It was a roller coaster.

“It was a very hard decision at the time not to continue. When it was all over I definitely felt I made the right decision, no regrets. But I am glad I did stay with Dean for the entire experiment and gave him a chance.

“Who knew we would be so ‘controversial’?” she said.

In 2020, Wells told Queensland radio station Hot91.9 FM saying: “I was on the highest-rating TV show in Australian history, and it somehow ridiculously seemed to be about me and some fake little affair,” he said.

“I wasn’t actually asked to do those things, but you’re stuck in a room with producers and camera crews, and they basically don’t leave you alone until you do something interesting,” he said.

A ‘pressure cooker of love’ … or hate?

Nine tells us there’s “scandal” this year (what, unlike previous years?), with the experts “gobsmacked”, huddled together awkwardly asking each other what just happened after several participants staged a walkout on set during a weekly group debrief.

The weekly commitment ceremonies will also return, and are great viewing, as couples sit on the couch and try to be kind, but end up revealing dirty laundry.

Not all doom and gloom … there are some happy endings

Two high-profile couples who recently appeared on MAFS cemented their coupling by having children, showing that there are success stories and maybe the experts do get the match-ups just right.

Controversial couple Melissa Rawson and Bryce Ruthven stayed together after the 2021 season, are engaged, and recently announced the early arrival of their twin boys Levi and Tate, born 10 weeks early.

“You’re doing an amazing job, the boys are very lucky to have you as their mum. We love you to bits,” Bryce commented on her recent Instagram post.

Jenny Craig ambassador Jules Robinson and Cam Merchant, both influencers with large social media followings, also survived the odds in 2019, and went on to have son Ollie.

Ms Cavenett says the best way to find a life partner is to “try and find someone who respects you for who you are and aligns with your values”.

However, Constable has the best advice if there is a 10th season of the show.

“You have better chances at finding love at your local Officeworks store, like where I met my now husband.”

Married at First Sight returns on January 31 at 7.30pm on Nine and 9Now

The post ‘Arrrgh, it brings back memories’: Australia’s biggest social experiment returns, but is it deja vu? appeared first on The New Daily.