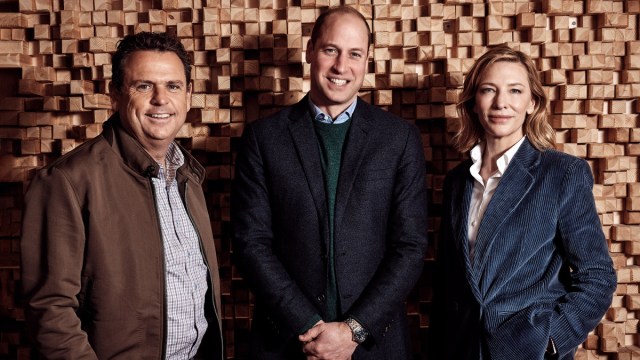 Prince William has appeared as a guest on Australian actor Cate Blanchett’s new podcast, sitting down with the star to discuss climate change.

Speaking on the new Audible Original podcast series Climate of Change with Cate Blanchett and Danny Kennedy, released on Thursday, the prince recalled fond memories with his family exploring the natural world, while also sympathising with the “doom and gloom” surrounding the issue.

William, 39, described himself as a “stubborn optimist” about action on climate change, as the king-in-waiting opened up about his belief in the importance of preserving the environment.

He explained his grandfather Prince Philip and father Prince Charles sparked his early interest and connection to the outdoors as a child.

“I think my grandfather and my father both kind of having a deep passion and interest in this area for many years has sort of piqued my interest and my curiosity,” William told Blanchett and Kennedy.

Prince William said the “big moment” was when he saw how small communities were being forced to adapt to a changing environment during his gap year when he travelled to Kenya.

He also said “watching a lot of documentaries” as a child had opened his eyes to conservation issues.

The Duke of Cambridge pledged to use his high profile to promote global action on climate change, telling Blanchett, “the more we speak about it, the more I do feel change will happen”.

“I do believe we can make huge strides … it would be great if it was in much quicker time than we anticipated because the solutions are out there,” he said.

Blanchett, a long-time campaigner on climate issues, also asked the prince about his Earthshot Prize, which began in 2021 to promote impactful approaches to environmental challenges.

In October last year, five projects were awarded $US1.3 million ($1.7 million) each.

The duke said he understood why so many people felt the issue of climate change was “completely overwhelming”. He said a driving factor behind the Earthshot Prize was to promote a positive public narrative.

“I see articles and I talk to people and the doom and gloom starts to set in more about the bigger picture,” he said.

“That contrast between some of the amazing things that are going on on the ground versus the narrative and the general feeling … really bothered me. And I thought, come on, if we are going to get anywhere here… how to inspire people to say we can fix this?”

Blanchett added that technology was already available to “stave off the worst impacts of climate change”, but that progress on climate innovations was too slow.