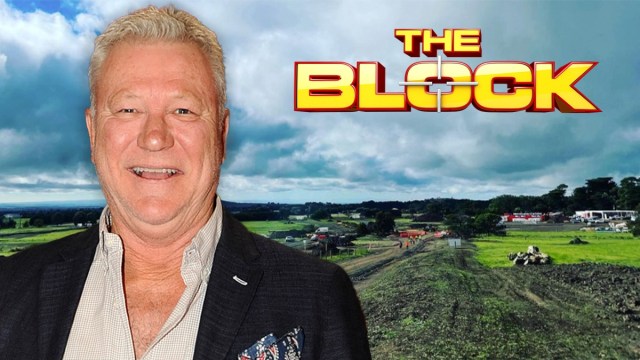 And so the challenge begins … finally!

After announcing The Block was going rural late last year, the chosen group of five teams were ready to renovate with boots, tool kits and plans galore in hand last week.

And then one of the contestants returned a positive COVID-19 test result.

It meant a frustrating seven-day delay for cast and crew.

But on Wednesday, no one was more excited than creator and executive producer Julian Cress, who told The New Daily he was standing in the “magical location” of Gisborne South in regional Victoria, overlooking the Macedon Ranges, where he was witness to machines and the Blockheads ready to work.

“It’s a beautiful day. The sun is out. The contestants are all getting settled and have hit the ground running and are renovating already, which is exciting for all of us.

“We’ve spent the past six months preparing for today and we’re thrilled to be finally under way.

“This is the first day. It’s very exciting for everyone. It’s not just the cast, but the crews are excited to get to work and see what they can come up with given the challenge of renovating 10 acres,” he said.

COVID delay just one of the challenges

COVID-19 temporarily delayed the start of renovation works on the site, but Mr Cress says it came as no surprise and, really, it’s just one of the challenges that lay ahead.

“We’ve had a couple of years of COVID crises, so another one is no surprise to me. But we got through that, as we’ve gotten through all of them,” he said.

“We were supposed to start a week ago, and then we had an issue with a positive test for somebody so we delayed it by a week.

“It means we have to play catch-up. We’re pretty used to dealing with challenges when we make The Block and the pandemic hasn’t stopped us yet.”

Adds a Nine spokesperson: “Like many TV shows, The Block has successfully navigated its way through the challenges of the pandemic for more than two years, in line with state and federal government health guidelines.”

By all accounts, the biggest challenge for the five still-to-be-announced teams is the size of this year’s endeavour.

Mr Cress put it in perspective.

“It’s the biggest block ever by a long shot. The main challenge is going to be finishing it,” he said.

“We’re not giving them any more time. When we did the first series of The Block [in Bondi, NSW, in 2003], the contestants – in 12 weeks – were given the challenge of renovating 73 square metres.

He said the contestants all know what they’ve signed up for, given the location was announced last year before they applied.

“They’re excited. They’re up for the challenge. Everybody knew what they were in for before they got here, so they can’t turn up and complain.

“They came in with their eyes wide open.”

What’s in store for the Blockheads?

What we do know is this.

The Nine network bought a 28-hectare block of land for $11 million on September 8.

After planning approval was issued, “plans online show a subdivision of seven lots with a creek running through the site,” according to Domain.

Local real estate agents told TND at the time the infusion of a big-budget television series to regional Victoria, after enduring extensive pandemic lockdowns, would increase house prices by between 20 and 30 per cent.

Raine and Horne director Ken Grech, who has been selling real estate in the Gisborne and Gisborne South area for more than 40 years, said “people don’t want to list their homes for sale until the 2022 season of The Block is over”.

“They feel the prices will jump dramatically because of the promotion of the Macedon Ranges and The Block in Gisborne.”

In 2020, contestants took home a combined $3.33 million after their reserves exceeded an average of $500,000 for renovations on five period homes in the luxury bayside suburb of Brighton.

Nine confirmed there have been “five houses” trucked in from various locations, including Queensland.

Now we just have to wait until the series airs in August for the soon-to-be-famous five to start weaving their magic.

And when auctioneers come in for the grand finale in November, we’ll find out then if semi-rural property prices, located less than an hour north of Melbourne’s CBD, will break records.

“We’re giving the same time contestants have always had, so the show is filmed over 12 weeks and then it goes to air. We plan at the normal time in the second half [of the year].

Mr Cress said the contestants “all have the same time frame, the same budgets, and they’re just going to have to work it out”.

The Block will air on the Nine network later in 2022