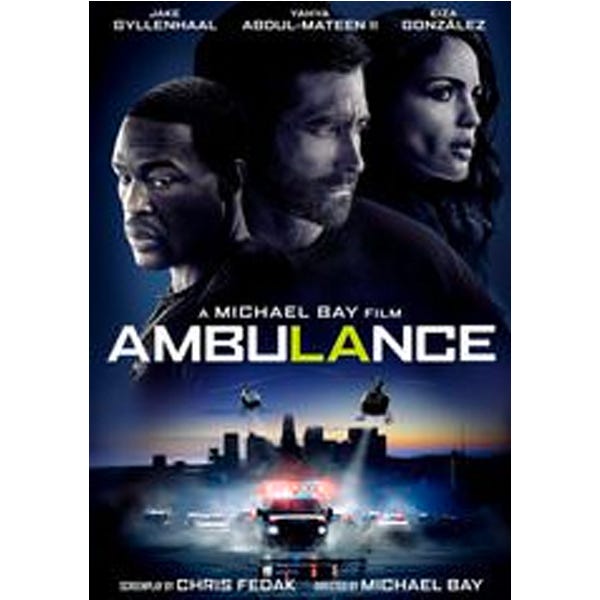 “Ambulance” is now streaming on-demand less than one month after it hit theaters on April 8. The action movie costs $20 to rent or $25 to buy from digital retailers like Amazon Prime Video, Vudu, and Apple TV.

The movie stars Jake Gyllenhaal and Yahya Abdul-Mateen II as adoptive brothers Danny and Will, respectively. When Will is in need of money, he turns to career criminal Danny for help. When their bank heist goes wrong, they hijack an ambulance and hold the two first responders on board hostage until they can execute the perfect escape.

Check out the trailer for ‘Ambulance’

“Ambulance” is directed by Michael Bay, best known for his work on “Armageddon” and the “Transformers” franchise. The movie received mostly positive reviews from critics, and has a “69% Fresh” rating on review-aggregation website Rotten Tomatoes.

How to watch ‘Ambulance’

“Ambulance” is now available to watch through video-on-demand (VOD) services, including Amazon Prime Video, Vudu, YouTube, and Apple TV. The movie costs $20 to rent or $25 to buy.

If you buy the movie, you can watch it as many times as you want from your retailer of choice. If you choose the rental option, you’ll have 30 days to begin watching the film and 48 hours to finish it once you’ve pressed play.

Digital purchases of “Ambulance” are also eligible to be linked to a free Movies Anywhere account, which allows you to sync your digital library of movies across different retailer apps. So, if you have your retailer accounts all linked with Movies Anywhere, you can buy “Ambulance” on Prime Video but also watch it through the Apple TV app.

Apps for VOD services are available on most mobile devices, smart TVs, and media players. You should check each service’s website to confirm that your device of choice is supported before ordering the movie.

When will ‘Ambulance’ be available to stream on Peacock?

“Ambulance” is expected to be available to stream on Peacock in the near future, but an exact date hasn’t been confirmed yet.

When will ‘Ambulance’ be available on Blu-ray?

While an exact Blu-ray release date for “Ambulance” hasn’t been announced yet, you can already preorder the Blu-ray from stores like Best Buy. A 4K Blu-ray version is also listed.

The Blu-ray editions of “Ambulance” also include a digital code for buyers to redeem online for a free streaming copy of the movie.