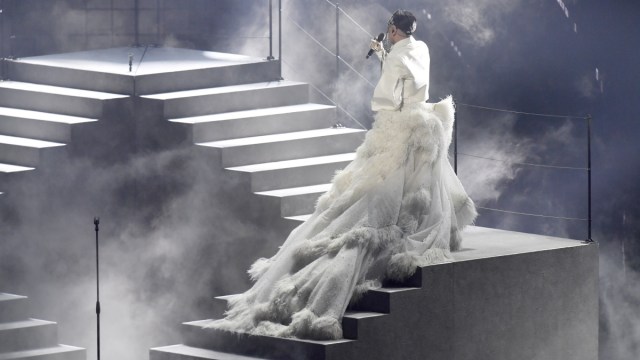 Australia’s Sheldon Riley has made into the final of the Eurovision Song Contest in Turin, Italy.

The 23-year-old singer, who grew up on the Gold Coast, gave an impassioned rendition of his song Not the Same in the second semi-final early on Friday (Australian time).

“Thank you so much, Europe! This is the biggest dream come true. Thank you,” he told the PalaOlimpico arena crowd after his performance.

Riley arrived on stage wearing a crystal mask and a flamboyant white outfit that sported about 180,000 crystals, according to Eurovision.

An “absolutely ecstatic” Riley was later quoted as saying he “just wanted to deliver my best performance and make Australia proud”.

“It’s a huge thrill that people across Europe have appreciated Not the Same, and I’m so happy I get to be on the stage again this weekend,” he said.

“This is honestly a dream come true for me. I am so thankful for all the support from fans over here and everyone back home.”

Australia was one of 18 performers in the second semi-final on Thursday night and joins Belgium, Czech Republic, Azerbaijan, Poland, Finland, Estonia, Sweden, Romania and Serbia in moving to the decider on Saturday night (Sunday morning AEST).

They will join the 10 successful countries from the first semi-final, including Ukraine, Norway, Switzerland, Armenia, Iceland, Lithuania, Portugal, Greece, Moldova and the Netherlands.

Britain, Spain, Germany, France and Italy don’t have to qualify from the semi-final stage and gain automatic access to the final.

Eurovision organisers later announced that Riley would perform in the second half of Saturday’s show.

Ukrainian act Kalush Orchestra are considered the favourites to win this year’s contest.

Australia was first invited to Eurovision in 2015, where Guy Sebastian performed in the final. It has competed every year since.

Australia’s highest-placing performer was Dami Im, who came second in 2016.