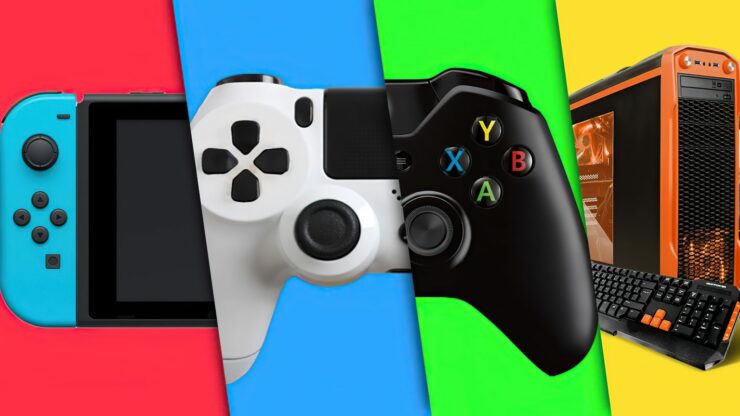 Gaming companies and their general performance wind up taking form through how well their products do on store shelves and units pushed. Others either close or get bought out and absorbed into another’s company umbrella. Today goes into various finances and gains that companies like Tencent, among others, experienced within the market.

A new report from Newzoo covers a lot of this, so let’s break down a few highlights. Obviously, Tencent remains our general overlord in terms of total revenue, growing by 9.9% year by year, to over $32 billion by the end of last year. Tencent owns companies like Riot Games, Remedy Entertainment, and PlatinumGames, to name a few. 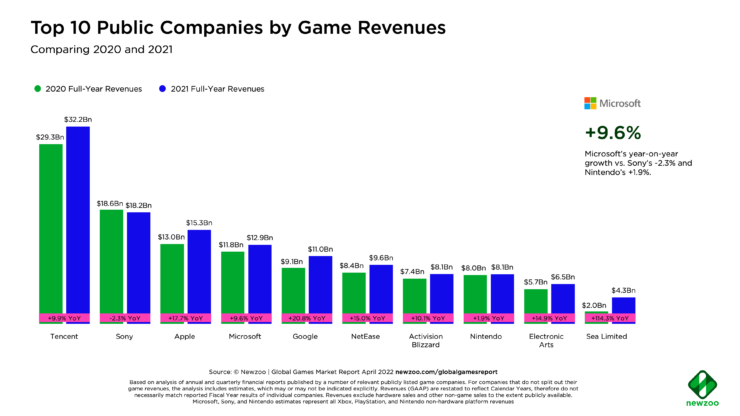 Meanwhile, over in the console sphere, Microsoft, being ranked the 4th public company in revenue totals, enjoyed healthy growth (a 9.6% gain). Compared to the competition, being Nintendo’s marginal growths (+1.9%) and Sony actually losing some, reporting a 2.3% loss, Xbox’s Game Pass was the primary breadwinner for Microsoft this time around with its annual recurring charges and growth, whereas the other two companies had various challenges to handle.

The mobile games industry also saw some significant growth as well, garnering a 12.5% increase by the end of 2021. The third-ranked company, Apple, had reported a 17.7% increase, and Google, ranked fifth, also saw a gain of almost 21%. Mobile games, to be frank, probably went around better last year than consoles did, which is pretty shocking. 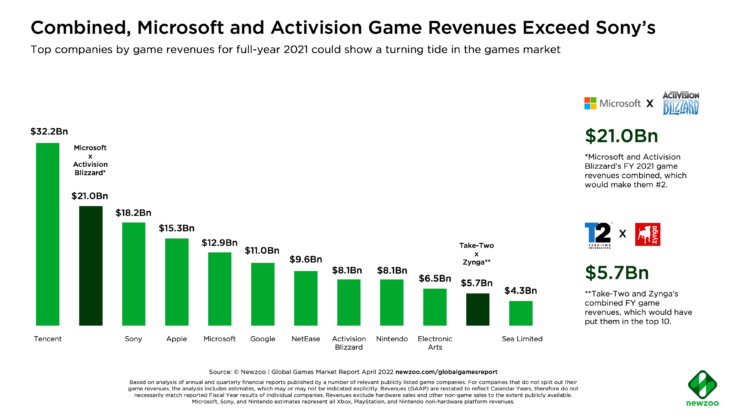 The other top 10 are also responsible for generating massive numbers in the industry. Combined with everyone else, this industry as a whole wound up taking home $126 Billion to its name, with subscription services like the aforementioned Xbox Game Pass contributing significantly. Given the industry’s general uptrend, things may be looking like they’ll be set to exceed $200 billion, which, in and of itself, is huge.

Of course, the combined revenue between Microsoft and Activision might cause concern for some of the organisms trying to impede the merger. Who knows what will happen by the time the merging happens? We’ll continue to report on this as stories from the Top companies continue to develop.