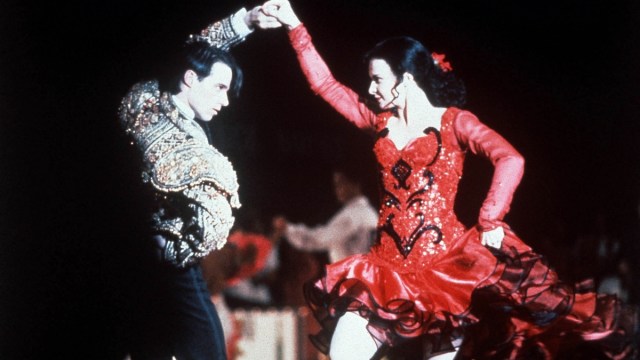 It’s time for a bit of nostalgia.

The year is 1992. Paul Keating was prime minister. The Reserve Bank cash rate hovered around 6.50 per cent. A loaf of white bread was $1.50 and Billy Ray Cyrus’s Achy Breaky Heart topped the ARIA charts.

Enter director and co-writer Baz Luhrmann and his heart-warming, low-budget, coming-of-age movie in August of that year, Strictly Ballroom … and everything changed overnight.

Presenter Margaret Pomeranz from SBS’s The Movie Show was on a waterfront location after the film’s premiere at the Cannes Film Festival in France, where she interviewed the stars of the show.

The reception for the $3 million film (it grossed $80 million worldwide) at Cannes was overwhelming.

It received a seven-minute standing ovation, won the festival’s Award of the Youth for Foreign Film, and the surprise hit suddenly “signalled the beginning of a new era in Australian cinema”, according to the National Film and Sound Archive (NFSA).

“In my wildest dreams I couldn’t have imagined what happened last night, happened.

“We could not get out of the cinema … people started to dance at the end of the film in the aisles,” Luhrmann, who went on to make classics such as Moulin Rouge (which opened Cannes in 2001) and The Great Gatsby in 2013, said that morning.

“We have one singular great asset in our country and that is originality. We don’t have this ready-made culture of the European film market,” he said, still reeling from the enormously warm reception.

Star of the show Paul Mercurio, these days a Shire councillor and judge on Seven’s Dancing With The Stars, told Pomeranz at the time the audience reaction was “magical”.

Now, 30 years later, the film has been restored by the NFSA and is the first Australian film selected for Cannes Classics since Wake in Fright (1971) in 2009.

It has also been selected to premiere at the 69th Sydney Film Festival.

Luhrmann, reflecting on the Cannes Film Festival being the launching pad for his “little film”, is heading back to where his career exploded.

“It would have been beyond my imagining 30 years ago when our little film was plucked almost magically to be screened in Un Certain Regard at the 12 o’clock screening, that exactly 30 years later I would be returning to the Festival de Cannes, having previously opened the festival twice with my films, and now this year with Elvis,” Luhrmann said in a statement on May 11.

“I always remember on that terrifying first screening of Strictly Ballroom when, at the end, a crowd gathered around us and a security guard reached over to pull us out.

“He said to me ‘Monsieur, from this point on, your life will never be the same again’.”

Luhrmann praised the “diligent efforts that led to the restoration of the original Strictly Ballroom to this glorious new high-definition cinema presentation”.

“It allows us to shine a light on the incredibly diverse achievements of Australian filmmaking over time,” he said.

“We couldn’t be more excited that the restored Strictly Ballroom will feature at Cannes alongside the premiere of Baz Luhrmann’s Elvis, illustrating a truly extraordinary career arc.”

Adds their chief curator Gayle Lake: “In 1992 the film signalled the emergence of an incredible creative originality coming out of Australia which has consistently exploded on international screens over the past 30 years.”

Not that we need reminding of the classic quotes and performances in Luhrmann’s first breakout feature, but thanks to Screen Australia, let’s go down memory lane as we prepare for the relaunch.

As Luhrmann said this week about being told his life would never be the same: “Indeed, he was right. Thank you, Cannes.”