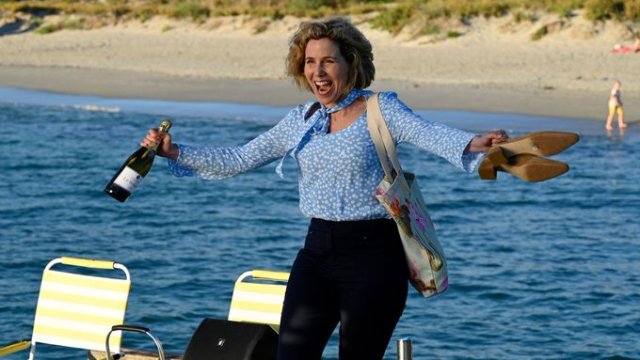 Tackling the “taboo subject” of women’s sexuality in film is nothing new, but when you make a movie about a bunch of male house cleaners whose list of jobs includes pleasuring their female clients at home, we could be in uncharted waters.

Yes, old chestnuts like the Magic Mike franchise, Deuce Bigalow: Male Gigolo and The Full Monty are funny, predictable known quantities that can entertain a girls’ night out.

But the new Australian movie How To Please A Woman, which has already screened across the film festival scene in Australia – and is slated for the Cannes Film Market – is all at once a  heartfelt “mature comedy” from purely a female perspective: what women want at home, on the domestic front and in the bedroom.

The brainchild of Western Australian television writer and director Renée Webster (The Heights, Itch), she tells The New Daily the movie acknowledges that “sex is a big part of our lives”.

“When I wrote this film I never intended for it to be as funny as audiences found it. The first time it screened to a cinema audience I was completely floored by how funny people found it. People were literally roaring and clapping.

“I think something particularly Australian about the film is it’s about people who love to swim in the ocean and know how to have a good time. I think the uniqueness comes from the absolutely pragmatic way this film tackles sex.

So how did it come about?

Earlier, Webster told the entertainment website theaureview.com that her first film script wasn’t based on a true story, but was formulated after doing her own research.

“It’s not a film based on true events … but there was an Australian company I read about where these women ran a sexual service provided to heterosexual women.

“The women who ran the company described themselves as housewives, and I was just really interested in how we have these preconceptions about the sex industry and who would be involved,” she said.

“What I found was unexpected,” Webster recounts to WA arts magazine Seesaw.

“Yes, there were women with heaps of money and power, but a lot of the women who used the service wanted to find some sexual agency and didn’t know how to get it and be safe, and were not prepared to give up sex.”

And so her script came to life – “we clean houses and give orgasms” – and her film was made in just five weeks last year in Fremantle.

At a post-screening In Conversation panel at CinefestOz in WA, one attendee Sofia Paul told The New Daily the audience “seemed engaged and inspired”.

“I think the viewers found the film heartfelt, funny … I can imagine how the audience would have felt understood by this film.

“Although it was directed at an older group, I felt it was inclusive of all women. The topic of intimacy and female pleasure is an important one to be talked about,” she said, going to the event on April 29 with her mother.

‘Pleasure is a serious business’

“Gina [played by Phillips], is not feeling fabulous. She has lost her job and feels stuck and frustrated in a passionless marriage. She has always lived life on the sidelines – that is, until she is met with a groundbreaking business opportunity of converting a team of well-built moving guys into well-built housecleaners,” writes the Australian and New Zealand Melbourne-based distributors Madman Films.

“Initially the response from her ocean-swimming community is immediate, and her all-male cleaning staff an instant hit. Finally, she is the boss she has always wanted to be.

“But, as her business booms, her clientele demands something more – sex, or better yet, pleasure.

“Faced with something far more than she imagined, Gina and her team, including her foodie manager, Steve, launch an enterprise that is all about getting intimacy right between people,” Madman writes.

Above all else, the film is “a precarious, often hilarious and revealing journey into the vulnerable world of what women really want and how hard it can be to get it right.”

“I would never dare to speak for every woman’s fantasy –
but you know – this particular idea seems to have hit a collective nerve. There’s obviously something about it.

“Since its preliminary release I’ve been getting random, unsolicited pics from my friends of their husbands doing the vacuuming or cleaning the bathroom. It’s kind of hilarious,” she says.

On a more serious note on filming semi-naked women in beachside change rooms, Webster says there was a “terrific” atmosphere among the cast and crew.

“I never sexualised our view of women in the change rooms,” Webster tells Seesaw.

“The atmosphere in those scenes is terrific, even when we were dealing with sex, intimacy and pleasure. All these women standing around with their clothes off and talking about things – you could feel them standing in their own power.”

“It’s a good story, because it’s a story that hasn’t been told before, where a woman of a certain age … in society where people are disappearing or becoming invisible.

“She is reclaiming her power and the way that she does it is in a way we haven’t seen before.”

Not surprisingly, the film has “generated brisk business”, according to Variety.

Beta Cinema bought How To Please A Woman at the script stage, believing it would resonate as a truthful, enlightening and smart comedy for a mature audience.

It did just that.

Brainstorm Media bought the rights for the US, pay-TV operator Sky secured all rights for the UK, while film distributors in Canada, Poland, former Yugoslavia (Discovery), Czech Republic and Hungary have also secured their own distribution rights.

Co-founder and CEO of Madman, Paul Wiegard, said the film has already been locked and loaded into more than 300 cinemas.

“Australian and New Zealand exhibitors are backing this feel-good, relatable comedy about female sexuality and vulnerability.

“The film offers a fun girls’ night out, the themes of empowerment and pleasure connecting with the primary audience.”

And what does Webster want the audience takeaway to be?

“After all the fun, what this movie does is remind us that sex is a thing that needs to be worked out between people.

“And I hope it reminds us that married people are lovers.”

How To Please A Woman preview screenings are out now at select cinemas, and opens nationally on May 19

The post ‘Enlightening, funny’: Why Aussie film about male house cleaners with benefits is making waves appeared first on The New Daily.