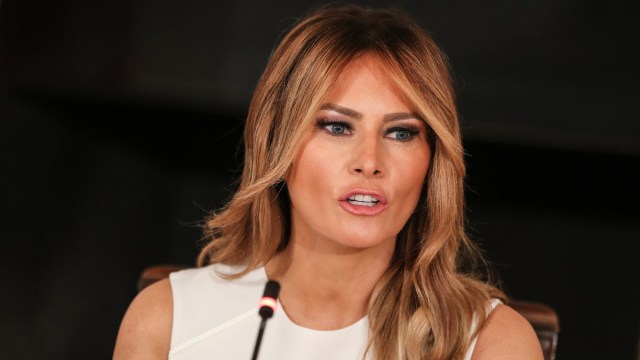 Former first lady Melania Trump has accused fashion magazine Vogue of bias for not putting her on the cover during her time in the White House.

Ms Trump spoke to Fox News in her first interview since her husband, Donald Trump, left office in January 2021 and was asked why she never graced the magazine’s cover.

Current first lady Jill Biden and Vice President Kamala Harris featured on the cover of Vogue last year, but Ms Trump was not featured during the four years of her husband’s administration.

During the interview Ms Trump was asked how she put up with “constant criticism.”

“They’re biased and they have likes and dislikes, and it’s so obvious,” she replied.

“And I think American people and everyone sees it. It was their decision, and I have much more important things to do – and I did in the White House – than being on the cover of Vogue,” Ms Trump added.

While Ms Trump may not have made the cover as first lady, she was featured in 2005 in her wedding dress after marrying Donald Trump.

She also reportedly declined a Vogue photo shoot shortly after her husband became US president because the magazine could not guarantee her the cover.

Vogue editor in chief Anna Wintour was a vocal critic of Mr Trump, using her editorial note in the March 2020 issue of the magazine to endorse Joe Biden for president, pointing to Mr Trump’s “dishonesty,” and “shocking lack of empathy”.

The subject of Ms Trump’s Vogue absence did not go unnoticed during the Trump administration.

Ms Trump’s press secretary, Stephanie Grisham, in 2019 said the then-first lady had much more important things to do.

“To be on the cover of Vogue doesn’t define Mrs Trump. She’s been there, done that long before she was First Lady,” Ms Grisham said.

“Her role as First Lady of the United States and all that she does is much more important than some superficial photoshoot and cover,” she said.

Ms Clinton, who went to to become secretary of state in the Obama administration, was the first first lady to feature on the magazine’s cover, appearing in 1998.

The post Melania Trump accuses <i>Vogue</i> of bias for not giving her a cover appeared first on The New Daily.