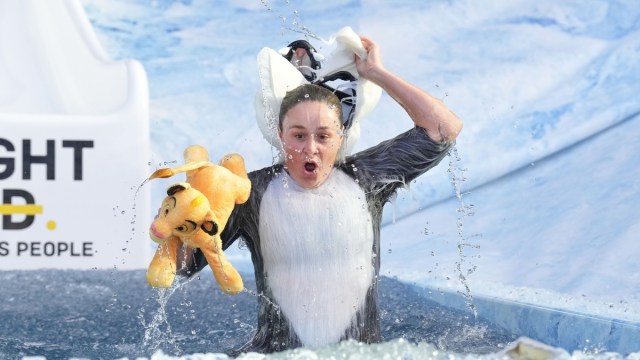 Not even renowned fighter Justin Langer’s trademark icy glare was as cold as the chilly plunge that faced him at the end of the Big Freeze slide.

But as the Australian cricket great hurtled towards the ice bath dressed as Rocky Balboa and emerged drenched, a wide grin appeared.

Langer could not have been more honoured to accept Neale Daniher’s invitation to be one of the celebrity sliders in Big Freeze Eight, held before the Collingwood-Melbourne AFL clash on Monday.

Featuring sporting greats and media identities in fancy dress, the slide was back at the MCG for the first time in three years, promoting fundraising for the fight against motor neurone disease.

Daniher has become a public face of the disease in Australia since he was diagnosed in 2013.

“When Neale asked me, I couldn’t get here quick enough,” Langer said.

“He’s one of the great gentlemen I’ve met and one of the toughest blokes I’ve met.

“It’s a great privilege to be here. What a cause for a great man.”

Langer, who met Daniher through their joint affiliation with West Coast more than a decade ago, was due to fly back to Perth an hour after taking the plunge.

He declined calls to do so in his soaking Rocky outfit.

But the biggest roar from the huge crowd was for retired tennis star Ash Barty, a self-confessed “absolute child”, who selected her costume from a raft of Disney-inspired options.

The reigning Wimbledon and Australian Open champion settled on Rafiki, a supporting character from The Lion King.

At the end of the slide, she held up a toy Simba and presented him to the crowd, mimicking Rafiki.

“I hope I performed a little bit better on the tennis court but this is just the most beautiful day for the right reasons,” Barty said.

“Neale is an incredible man and bringing awareness to such a beast is so important.

“I hope we can all do our thing, get behind it and put your beanie on.”

There was a personal touch to the Big Freeze slide for entertainer Rhonda Burchmore, who pulled off an impressive Poison Ivy.

“I lost my sister to motor neurone disease and I figure a couple of minutes of torture is worth it to raise awareness,” Burchmore said.

“I know she’d be laughing up there at her big sister today.”

One of the best days on the footy calendar ❤️