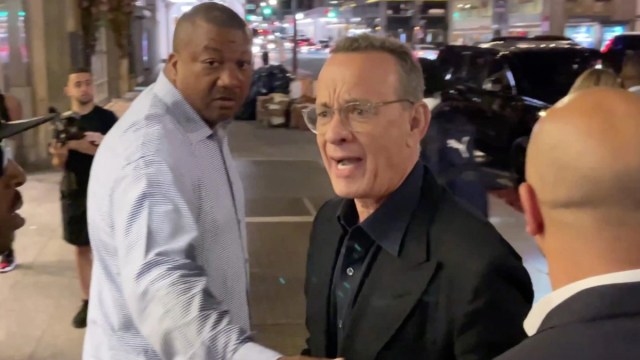 Actor Tom Hanks has angrily yelled at fans to “back the f— off” after his wife Rita Wilson was accidentally tripped by swarming supporters as the couple left a New York restaurant.

In a video posted on Thursday, Hanks and Wilson are seen walking toward a car while being pursued by fans trying to get selfies and autographs.

A man appears to bump into another fan, knocking Wilson, 65, from behind and almost upending her.

Wilson is seen catching herself mid-stumble, yelling out in fear before looking at Hanks and telling the crowd to “stop it”.

Hanks, 65, quickly intervened, gently pushing a fan, and a security guard, to give them space.

“That’s my wife, back the f— off,” Hanks said, demonstrating with his hands for people to back away.

“Knocking over my wife,” he said, staring down a supporter in anger.

Wilson, 65, then gets into the couple’s waiting vehicle as her famous husband remonstrates with the crowd.

Some members of the mob, as well as the paparazzi, immediately apologised. They can be heard saying: “Sorry about that, Tom.”

The Elvis actor made headlines earlier this week after he reflected on his Oscar-winning roles with The New York Times, including 1993’s Philadelphia, where he played a gay man with AIDS and 1994’s Forrest Gump, in which he played a character with undefined intellectual disabilities.

He called both films “timely movies, at the time, that you might not be able to make now.”

New York Times reporter David Marchese argued neither film would be made with Hanks as the lead in 2022 – to which the Oscar-winning actor agreed.

“Let’s address ‘Could a straight man do what I did in Philadelphia now?’” Hanks said.

“No, and rightly so. The whole point of Philadelphia was don’t be afraid.

“One of the reasons people weren’t afraid of that movie is that I was playing a gay man. We’re beyond that now, and I don’t think people would accept the inauthenticity of a straight guy playing a gay guy.

“It’s not a crime, it’s not boohoo, that someone would say we are going to demand more of a movie in the modern realm of authenticity.”

The post ‘Back off’: Tom Hanks’ tirade at fans crowding his wife appeared first on The New Daily.