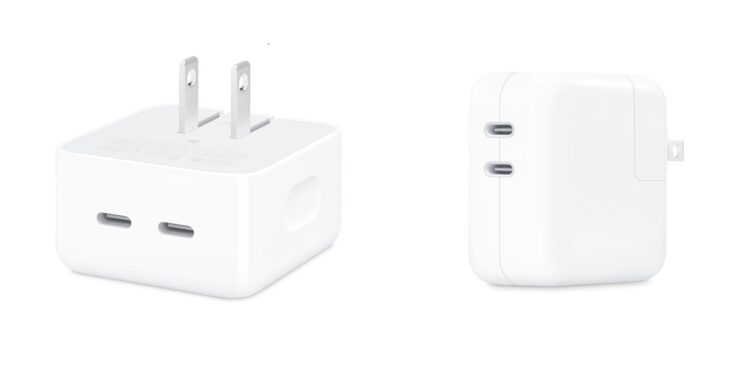 Apple hosted its WWDC 2022 event recently where it saw fit to announce its upcoming software updates for iPhone, iPad, Apple Watch, Mac, and more. Other than this, the company also saw fit to announce its latest M2 MacBook Air and MacBook Pro models along with a new 35W power adapter with dual USB-C ports. Today, the M2 MacBook Pro and the 35W power adapter have been made available to order. Scroll down to read more details on the subject.

Apple’s latest M2-powered MacBook Pro is available for order today as well but the redesigned M2 MacBook Air will be available to users in July. Apart from the notebooks. Apple’s new 35W power adapter with dual USB-C ports is also available to order and comes in standard and compact sizes. However, both variants are priced the same in the United States, coming in at $59.

The new compact 35W power adapter will be included in the box of the redesigned MacBook Air when configured with an M2 chip with a 10-core GPU and 512GB storage capacity or higher. However, it can also be ordered separately for $59 from apple.com or the Apple Store app.

As for the design, both variants of the 35W power adapter feature foldable prongs. The adapter can be used to charge multiple devices at the same time. Apple recommends users use the new adapter to charge the MacBook Air with an M2 chip but it is also compatible with iPhone, iPad, Apple Watch, AirPods, and more.

At this point in time, the power adapter is available in the United States, Canada, China, Japan, Mexico, Taiwan, Thailand, and the Philippines. While the 35W adapter is available starting today, Apple has not yet started accepting orders for the MagSafe 3 cables. Nonetheless, we will keep you guys posted on the latest, so be sure to stick around.

This is all there is to it, folks. Share your views with us in the comments section below.