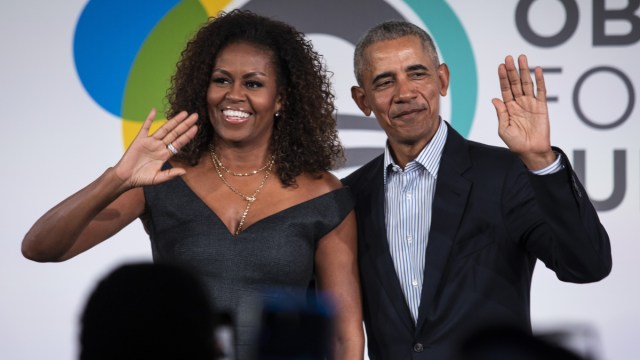 The Obamas’ production company, Higher Ground, will team up with the Amazon-owned audio company in an exclusive multiyear first-look deal announced on Tuesday.

The move comes after a tense few years between Spotify and the Obamas’ media company. The two parties have been locked in disputes about how much of Higher Ground’s output would include the former US president and first lady.

In April, the Obamas declined to renew its 2019 contract with Spotify, with reports alleging the limit of Spotify’s exclusive audience, along with a lack of green-lit content, was to blame.

Spotify and the Obama media company created multiple programs, including The Michelle Obama Podcast and Renegades: Born in the USA.

“At Higher Ground, we have always sought to lift up voices that deserve to be heard – and Audible is invested in realising that vision alongside us,” former President Obama said in a statement.

“I’m looking forward to partnering with them to tell stories that not only entertain but also inspire.”

The Audible deal provides the Obamas with the opportunity to reach a broader audience than shows previously launched exclusively on Spotify. It is expected to be worth millions of dollars and has already gone into effect, although Higher Ground still has to release a handful of episodes and shows from its Spotify contract.

“We are so proud of the stories we have been able to tell at Higher Ground, and there’s no one we’d rather write our next chapter with than Audible,” Ms Obama said on Tuesday.

“Together, we will keep striving to tell compelling, provocative, and soulful stories – while doing everything we can to make sure they reach the folks who need to hear them.

Higher Ground’s back catalog of Spotify shows – which include Mr Obama’s effort with Bruce Springsteen, Renegades: Born in the USA, and Ms Obama’s own podcast – will remain available on all major podcast platforms, even those that were initially Spotify exclusives.

“We are incredibly proud of our partnership with Higher Ground and while we declined to extend our deal we are excited about the series we made together and those still to come in the months ahead,” a Spotify spokesperson told The Hollywood Reporter.

A spokesperson for Higher Ground said the two companies “plan to make the Audible Originals available to the widest possible audience”.

The Obamas’ previous deal with Spotify was rumoured to be worth upwards of $US25 million ($37 million). The financial terms of their multiyear deal with Audible remain undisclosed.