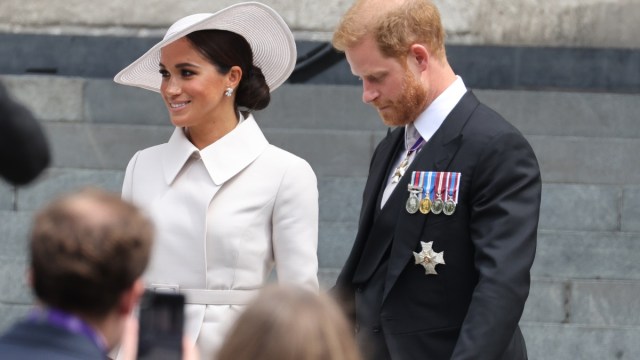 Lessons have been learned following a review of bullying allegations made by royal staff against the Duchess of Sussex, Buckingham Palace says, although it will keep a report into the saga secret.

The palace announced the HR review in March 2021 after the Times newspaper reported allegations had been made against Meghan Markle, the American wife of Prince Harry, including that she had reduced some of her assistants to tears and treated others so badly that they quit.

The couple denied Meghan had bullied anyone, and in their bombshell tell-all interview with Oprah Winfrey just days later, she accused the palace of “perpetuating falsehoods”.

Michael Stevens, the Queen’s treasurer who is known as Keeper of the Privy Purse, said the privately funded review had been set up to examine the handling of the allegations and to improve practices across the royal households.

It was carried out by an independent legal firm.

“The review has been completed and recommendations on our policies and procedures have been taken forward,” Mr Stevens said on Thursday.

“We will not be commenting further.”

The Times report said a senior aide to Harry and Meghan had raised a complaint in October 2018 alleging the duchess had bullied some of her assistants. The prince had urged the aide to drop the issue, according to the article, and it went no further.

The article alleged that, in her brief period as a working royal, the duchess had driven out two personal assistants and other staff had been “humiliated”.

Meghan has always denied the accusations, saying through a spokesman at the time that she was “saddened by this latest attack on her character, particularly as someone who has been the target of bullying herself”.

The paper reported the allegations also contributed to the prickly relationship between Prince Harry and his brother Prince William. The Duke of Cambridge brought forward plans to split his office from Harry’s staff after he was made aware of the allegations, it said.

The palace ordered a review into the allegations. On Thursday, it said all those who took part, including current and former staff members, had been informed of its outcome.

Royal sources declined to say whether the duchess herself had been involved.

“I think the objectives have been satisfied because lessons have been learned,” a senior royal source said.

Mr Stevens spoke as he gave details of the annual report on the Queen’s taxpayer-funded spending and income, known as the Sovereign Grant, which was published on Thursday.

Royal activity, curtailed by the pandemic, was beginning to pick up during the period and several expenditure areas had increased. For instance, travel was up by more than £4.5 million, and property maintenance soared to almost £64 million as the 10-year project to renovate Buckingham Palace continued.