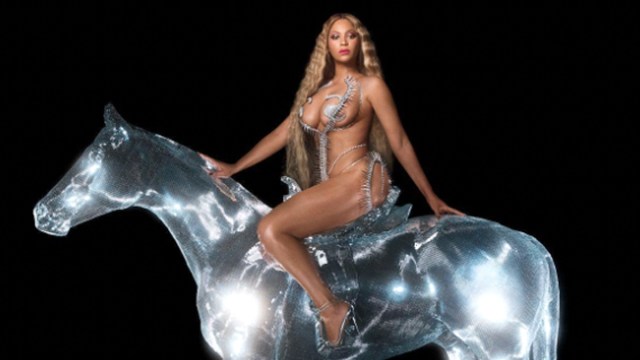 Beyonce has revealed more about her upcoming seventh album and even more of herself in a near-naked shot on social media.

The photo, uploaded to the star’s Instagram page on Friday morning (Australian time) will be the cover of Renaissance, her seventh studio album, when it is released later this month.

It shows Queen Bey wearing a custom-made chest piece while sitting on a transparent silver horse.

The snap was an instant hit with the singer’s 265 million Instagram followers, drawing millions of likes and thousands of comments in just a couple of hours.

Fans were quick to compare the cover’s artwork to Bianca Jagger’s iconic Studio 54 entrance and the historic Renaissance painting of noblewoman Lady Godiva.

With the picture, the singer also revealed some insights behind the upcoming album.

“Creating this album allowed me a place to dream and to find escape during a scary time for the world,” she wrote.

“It allowed me to feel free and adventurous in a time when little else was moving. My intention was to create a safe place, a place without judgment. A place to be free of perfectionism and overthinking. A place to scream, release, feel freedom.

“It was a beautiful journey of exploration.”

The cover shot follows last week’s release of the first single, Break My Soul, from the new album. The dance pop-infused track features New Orleans rapper Big Freedia, and was an instant hit.

A video for Break My Soul is rumoured to drop in the coming days.

The star hinted that fans can expect more up-tempo tracks, similar to the album’s lead single.

“I hope you find joy in this music. I hope it inspires you to release the wiggle. Ha!” Beyonce wrote on Instagram.

“And to feel as unique, strong, and sexy as you are.”

Renaissance will be released on July 29. It is Beyonce’s first LP since 2016’s Lemonade, although since then she has released her The Carters LP with husband Jay-Z, Everything Is Love, and curated the Lion King: The Gift album following the release of the Disney film.