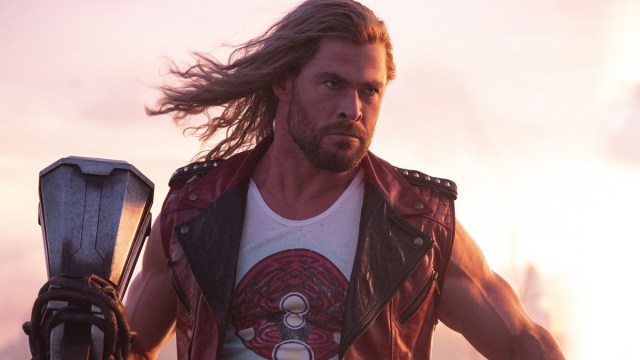 It’s all about “re-embracing a favourite tradition” and it’s called leaving your house and heading to the cinema for choc-tops, loads of popcorn and a big, theatrical experience.

And people with cash to spare are doing it in droves, according to the latest Roy Morgan Research.

“The new year has brought relief for many Australians and cinema-goers are no exception with millions of people keen to re-embrace a favourite tradition as the new ‘COVID-normal’ means we can go about our daily lives largely as we did prior to the pandemic,” she said.

And what will they see this month?

Maybe the latest addition to the Marvel Cinematic Universe film, a wonderful documentary about Leonard Cohen and his beautiful Halleluja or a story about a crane worker keen to play in the British Open.

In the long-awaited Taika Waititi blockbuster filmed in Australia and thereabouts, Thor returns in a blaze of glory and good humour on Wednesday.

The MCU epic will dazzle with crazy stunts, a bit of Thor nudity (thanks to Zeus, played by Russell Crowe) and a love story in between as the God of Thunder rekindles his on-off love for Jane Foster

This feature-length documentary has been described as “a definitive exploration of singer-songwriter Leonard Cohen as seen through the prism of his internationally renowned hymn, Hallelujah”.

It takes a look at the songwriter and his times, the song’s dramatic journey from record-label reject to chart-topping hit, and moving testimonies from major recording artists for whom Hallelujah has become a personal touchtone.

This is the amazing true story of Maurice Flitcroft, a crane operator and optimistic dreamer from Britain’s Barrow-in-Furness who, with the support of his family and friends, managed to gain entry to the 1976 British Open. Qualifying despite never playing a round of golf before.

In this comedy drama, Flitcroft (played by Mark Rylance) pulls off a series of hilarious and heartwarming attempts to compete at the highest level of professional golf, drawing the ire of the golfing elite but becoming a British folk hero in the process.

A brilliant young fund manager leaves her unfulfilling job and long-term boyfriend to chase her lifelong dream of becoming an opera singer in the Scottish Highlands.

Starring the one and only Joanna Lumley (Absolutely Fabulous), the film has everything – romance, tenderness and a great result.

Plucked from a federal penitentiary and recruited by his handler, Donald Fitzroy (Billy Bob Thornton), Gentry was once a highly-skilled, Agency-sanctioned merchant of death. But now the tables have turned and Six is the target, hunted across the globe by Lloyd Hansen (Chris Evans), a former colleague at the CIA, who will stop at nothing to take him out.

Agent Dani Miranda (Ana de Armas) has his back. He’ll need it.

A young woman has a chance to save the love of her life when she discovers that the mix-tape they made together can transport her back in time.

The phone is dead. And it’s ringing.  Director Scott Derrickson (Dr Strange) returns to his terror roots and partners again with the foremost brand in the genre, Blumhouse, with a new horror thriller and stars Ethan Hawke (The Northman, Telsa) in the most terrifying role of his career.

Finney Shaw, a shy but clever 13-year-old boy, is abducted by a sadistic killer and trapped in a soundproof basement where screaming is of little use. When a disconnected phone on the wall begins to ring, Finney discovers that he can hear the voices of the killer’s previous victims.

Yes, it’s scary. But it’s anchored in a solid police investigation as they race to find the teen alive.

Where the Crawdads Sing – July 21

From the best-selling 2018 novel comes comes the story of Kya, an abandoned girl who raised herself to adulthood in the dangerous marshlands of North Carolina.

She was dubbed the Marsh Girl, and for years rumours about her haunted Barkley Cove, isolating the sharp and resilient Kya from her community. She was then drawn to two young men from town, and opens herself to a new world before disaster hits when one of them is found dead. She is immediately cast by the community as the main suspect.

Jessica Chastain didn’t need long to regroup after The Eyes of Tammy Faye with this action drama.

Speeding through the Moroccan desert to attend an old friend’s lavish weekend party, wealthy Londoners David and Jo Henninger (Ralph Fiennes and Chastain) are involved in a tragic accident with a local teenage boy.

Arriving late at the grand villa with the debauched party raging, the couple attempts to cover up the incident with the collusion of the local police. But when the boy’s father arrives seeking justice, the stage is set for a tension-filled culture clash in which David and Jo must come to terms with their fateful act and its shattering consequences.

This 90-minute documentary explores mental health and the redemptive power of sport. Starring Dwayne ‘The Rock” Johnson and a host of other world-renowned athletes, Ten Count tries to de-stigmatise mental illness and charts the incredible comeback of ex-Premier League soccer player-turned-boxer Leon McKenzie and his epic, award-winning final professional fight.

It won’t be released to worldwide audiences until early 2023.