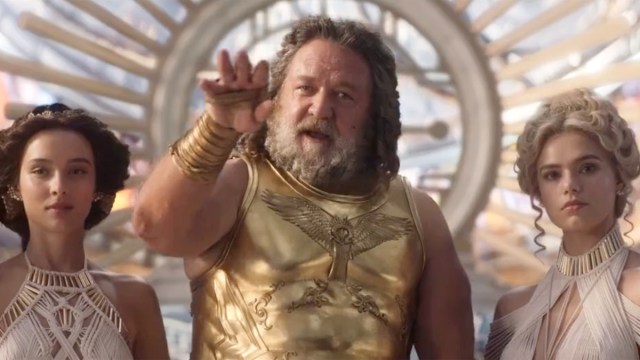 Of all the cameo appearances in the latest epic from the Marvel Cinematic Universe, it’s New Zealand-born actor Russell Crowe who has spectacularly stolen the show.

Crowe, 58, whose catalogue of work includes lead roles as everything from a mathematician to a water diviner, nailed the brief out of all the gods in Thor: Love and Thunder by bringing to life – with white tunic and Thunderbolt – Zeus, the ruler, protector and father of all gods and humans.

Rather than playing serious, as he did as ferocious Roman general-turned-gladiator Maximus in Ridley Scott’s Oscar-winning 2000 epic Gladiator, Crowe’s light-hearted, almost “silly” performance was award winning.

In an interview with Disney, Chris Hemsworth, who returns as the God of Thunder, reflected on Crowe’s performance as Zeus before the film’s worldwide release this week.

“I never thought I’d see the day where Russell would appear on screen with hints at Gladiator imagery, yet with a wink – totally self-deprecating.

“He didn’t hold back,” The Direct reported.

“I’m such a fan. I have been since I first started acting. There’s such a weight and a seriousness to his performances and to him, as an individual, from afar.

“But meeting him, he has a great sense of humour and did whatever Taika [Waititi, director and co-writer] asked on set, which was mind blowing.

“And it was really fun to play with the mythology, going from Norse to Greek mythology – Taika pulls all these worlds together.”

‘Fun to see’ Crowe being silly

Reprising her love-interest role as astrophysicist Dr Jane Foster from the original 2011 Thor, Natalie Portman, 41, says “it was fun to see [Russell Crowe] be silly”.

This time, Foster – who invariably (jokingly) gets called Jodie Foster and Jane Fonda by Thor’s offsider and battle-ready buddy Korg – plays an integral role in battling the evil Gorr The Butcher God.

“It was so much fun to see Russell Crowe play Zeus and have such a great sense of humour with the character.

“I think we’re so used to him in these very strong, heroic roles, so it was fun to see him be able to let loose.”

In a May 20 interview with Entertainment Weekly, Waititi said Crowe played the role in “a way you’ve never seen Russell before”.

“I consider Russell a friend, and I forget that there are some friends I have who are really incredible at what they do,” Waititi says with a laugh.

“When I was on set, I was like, ‘Oh sh-t, that’s right! You’re Russell Crowe! You’re a really amazing actor’.”

So who else makes an appearance?

Melissa McCarthy (Nine Perfect Strangers, Spy) plays the role of an Asgardian actress playing Thor’s sister, Hela, while, as always, McCarthy’s husband Ben Falcone is also along for the ride.

Their 2020 audition tape was obviously impressive.

The Guardians of the Galaxy cast, led by Star-Lord Chris Pratt, are back, including Dave Bautista (Drax), Vin Diesel (Groot) and Bradley Cooper (Rocket).

No spoiler alert, but there are a lot of children in what is Hemsworth’s fourth standalone film as the God of Thunder, and most – if not all – are related to the cast.

In a recent interview with US film critic Kevin McCarthy, Hemsworth said his children “really wanted” to be in the film.

“Taika had his children in there. Christian Bale had his [Joseph, 7, and daughter Emmeline] … Natalie had … her kids as well. That’s my daughter … as well.  She plays the character of Love,” he revealed.

“It felt like a one-off family experience. I now don’t want them to go off and become child stars and actors. It was just a special experience we all had.”

So will Crowe join the Marvel family permanently?

Thedirect points out that, unlike Angelina Jolie’s Thena, “Crowe’s time in the MCU is almost certainly approaching its end after only one outing”.

“When the villain of a story’s entire goal is to get rid of all gods, any newly introduced characters who fall under that parameter can make for easy pickings when it comes to who to kill off.

“After all, they certainly won’t be killing Chris Hemsworth’s titular character right off the bat.”

Either way, Crowe had fun playing Zeus, and, just a suggestion, stick around after the credits roll as Waititi hands Crowe’s Zeus the final monologue.

Maybe he’ll live to see another day in the MCU?

Thor: Love and Thunder is in cinemas nationally from Wednesday

The post Russell Crowe as Zeus: The ‘mind-blowing’ scene that stole Thor’s thunder in latest Marvel epic appeared first on The New Daily.