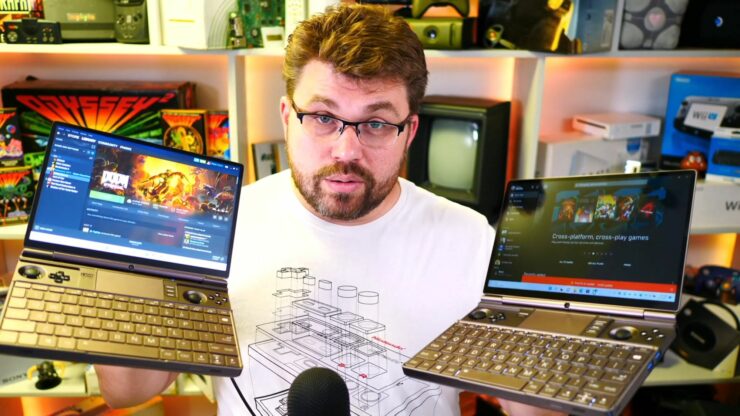 YouTube creator The Phawx recently tested the brand-new GPD Win Max 2 handheld console on his channel. Currently, the system is offered in two flavors, the Intel Alder Lake Core i5-1260P or the AMD Ryzen 7 6800U. The content creator tested both units and shared his results in his most recent video.

While the AMD Ryzen 7 6800U variant performed better in all tests, Intel continues to struggle to make a footing in the gaming marketplace with the Intel Core i5-1260P. AMD’s system configuration utilizes the RDNA 2 architecture that uses twelve CUs, while Intel’s system offers Xe-LP graphics showcasing 96 CUs. New readers might think that more compute units would speak to having more power behind the unit, but that is not the case, as Intel has struggled with less efficiency in their systems in comparison to rival AMD.

GPD has remained consistent in its hybrid laptop and gaming system design, setting it apart from the competition. As we mentioned before, the form factor of the GPD Win Max 2 is unique in the current handheld market, as most systems have taken cues from Nintendo and Valve for their designs. Because of this design choice, as it is a part laptop, single-thread workloads on the Intel processor perform well. Still, users may only use the system as a gaming device rather than an affordable hybrid device.

The review below shows tests that “The Phawx,” also known as Cary Golomb, offers tests that proceeded for several hours before GPD released the reigns on the Indiegogo campaign for the new AMD variant. There are still several tests that he could not complete at the time, but in most of the tests, Intel was dominated by AMD.

Golomb also took to Twitter with some of his results, showing several charts — one being the Unigine Heaven test that ran at 800p. Golomb wanted users to understand that the Ryzen 7 6800U was superior to Intel’s chipset due to the AMD variant running at 15 W, with the octa-core configuration proving to be highly efficient.

Golomb did ensure viewers that he would continue testing throughout the crowdfunding campaign as he had a chance to work with the two versions of the GPD Win Max 2 system. VideoCardz notes that “such a chart will also be more complicated and time-consuming to make due to Intel CPU using the hybrid architecture of Performance and Efficient cores, which is not the case with AMD CPU.”

Now that handheld gaming computers are becoming more popular, it will be interesting to see where these systems will head, especially while trying to remain efficient and still gaming accessible while not breaking the bank.