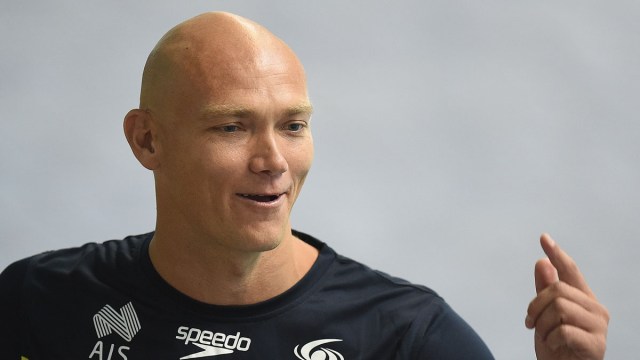 Australian Olympic champion swimmer Michael Klim has opened up about a rare auto-immune disorder that has left him unable to walk unassisted, with little or no feeling in his feet.

Klim, 44, who lives in Bali with his partner Michelle Owen and the three children he co-parents with ex-wife Lindy Rama, told Ten’s Sunday Project he’s been diagnosed with chronic inflammatory demyelinating polyneuropathy (CIDP).

“The body is trying to protect itself, but it’s eating its own tissue,” he said.

“In my case it’s eating the outside of my nerves.”

The debilitating condition is a rare auto-immune disorder where the body attacks the myelin sheaths – fatty coverings on the fibres that insulate and protect the nerves. There is no cure, and most treatment is aimed at suppressing the immune system.

Klim said he first noticed symptoms about three years ago. Then came a terrible moment at Kuala Lumpur airport, when he suddenly found himself unable to walk.

“I called Michelle and I was literally in tears, because I couldn’t pinpoint what it was,” he said.

“That was one of the scariest moments I had.

“For me, my ability to do anything physical was something I used to pride myself on, and used to give me mental strength.

“Bit by bit [it] was being taken away,” he told Network Ten.

But it is his own personal battle that has challenged him the most.

“I’ve lost sensation in both of my feet … a little bit of function in my left foot, minimal in my right foot … lost calf muscles on both sides,” he said.

Klim revealed that he travels regularly to Sydney’s Royal Prince Alfred Hospital, where he is receives immunoglobulin replacement therapy from donors.

“There’s 10 [blood] donors for every bottle that I can get infused … I go through about six, so there’s about 60 people who help me for every treatment I have,” he said.

“There was one significant moment where Michael kept falling over and was unable to hold himself up and it was happening in front of the kids too,” she said.

“That was when they really thought there’s something really going on with dad and it was quite scary for them to see that.”

Dream Team and partner by his side

Besides Ms Owen, who he describes as his “rock”, it’s his Dream Team buddies from 2000 who have supported Klim since he fell ill.

“Chris [Fydler] for instance, walking out for an appearance, he would say ‘I’ll walk in front of you just a little bit so if you need to grab my belt or something’,” he said.

“My friends actually astounded me.”

Daniel Kowalski gave him the keys to his house to stay when he was in Sydney for treatment.

Klim described Ian Thorpe as “an incredible human being”: “He was calling all the clinics … doing all the research for me … and then pro-active making sure I was doing all the right things”.

“He [Thorpe] gave me the nickname the ‘human walking stick’, because that’s what I am for Michael,” Ms Owen said.

Klim said Ms Owen had “been a rock for me, because I could end up in a wheelchair one day”.

“I got worse, then maybe a little bit better, and I’ve just plateaued out,” he said.

The condition remains a challenge – despite Klim’s physical fitness and an Olympian’s fighting spirit.

“It’s funny the people I’ve told about my CIDP, they’ve said ‘that’s OK, you’re an Olympic athlete, you’ve got that mental strength to get you through this,” he said.

“It’s actually not necessarily been the case. It’s not like I can do extra exercise … if anything, at times I’ve been more despondent about it and it’s more depressing.

“I give myself an hour a day to feel sorry and angry and frustrated and whatever emotion comes in my mind – and then I move on with the rest of life.”

And he has. He’s restarted his swim school in Bali and swims every second day.

“It used to be my happy place. It’s even more happy now.”