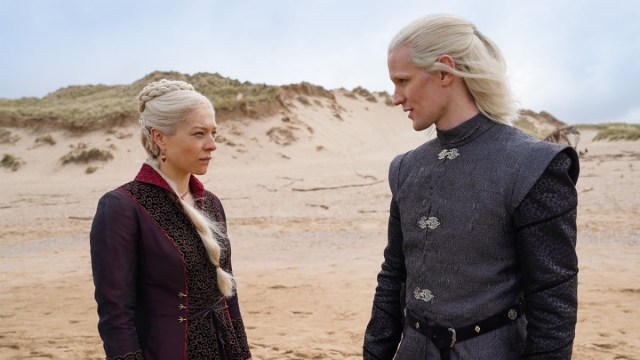 Without a doubt, August is shaping up to be the strongest month so far for streaming services, where audience engagement numbers will be closely monitored.

Whether it be the highly anticipated Game of Thrones prequel, House of the Dragon – starring Australian rising star Milly Alcock – or TV series and films targeting a teen audience through to music festival documentaries, there’s a show for you.

Given the major services – Netflix, Stan, Foxtel/Binge, Disney+, Paramount+, Prime Video and Apple TV+ – still have manageable monthly subscription fees ranging from $6.99 to $18.99 and ease of access, there’s no reason to watch the countdown to the AFL and ARL finals or the Commonwealth Games at 5am if you don’t want to.

Dallas-born actor Owen Wilson, who delighted us all in The Royal Tenenbaums, to Jedediah in Night at the Museum, Loki – and who could forget Wedding Crashers with Vince Vaughn – may be having his best moment ever.

No, he’s not in a Marry Me sequel with JLo, he’s playing the world’s most powerful flying, suited-up superhero, complete with helmet, shiny armour and a sense of humour.

Described as a heartwarming, action-packed family flick, it has all the hallmarks of a souped-up Goonies meets The Incredibles mash, but next level.

The synopsis reads: “While hanging out after school, Charlie (Walker Scobell from The Adam Project) and his friends discover the headquarters of the world’s most powerful superhero hidden beneath his home.

“When villains attack, they must team up to defend the headquarters and save the world.”

Done! Wilson is up for the challenge.

If that’s not your cup of tea, there’s also a Stranger Things spin-off, a few more Diana documentaries (it’s the 25th anniversary of her death this month), sci-fi thrillers, horror, Gogglebox is back and there are four Tom Cruise Mission: Impossible reruns (landing August 1).

Described as a sci-fi series to fill the void left by the Stranger Things juggernaut, this one is about four paper girls – Erin, Mac, Tiffany, and KJ – out on their delivery route in the early morning hours after Halloween, in 1988.

Sounds ominous? Correct. Based on the best-selling graphic novels written by Brian K Vaughan, the girls get caught in the crossfire between warring time travellers which changes their lives forever as they’re transported into the future and ultimately must try to figure out a way to get home.

“While reconciling that their futures are far different than their 12-year-old selves imagined, they are being hunted by a militant faction of time travellers known as the Old Watch, who have outlawed time travel so that they can stay in power,” Prime Video says.

“In order to survive, the girls will need to overcome their differences and learn to trust each other, and themselves.”

Buzz the space ranger is back.

The hero who inspired the toy, Lightyear follows the legendary toy after he’s marooned on a hostile planet 4.2 million light years from Earth alongside his commander and their crew.

Imagine pretending to date a partner in order to survive a summer of weddings?

Respected American investigative journalist Brian Ross hosts and curates this 10-part docu-series that takes audiences on a dive into the thoughts and actions of 10 very different killers to find out what makes them tick, utilising forensic analysis, gripping archival footage, interrogation recordings and insider accounts.

Based on the award-winning DC comic series written by Neil Gaiman, The Sandman (aka Dream) is a 10-part, character-driven blend of myth and dark fantasy woven together following his many adventures.

Played by Tom Sturridge (Irma Vep, Being Julia), he’s a powerful cosmic being who controls our dreams and is unexpectedly captured and held prisoner for over a century.

He must travel across different worlds and timelines to fix the chaos his absence has caused.

This is the final season of this coming-of-age mystery about the Locke family and their magic after debuting in 2020.

It has been a ratings winner for Netflix and has all the elements of love, mystery, family and bonds.

All we can say is they uncover more magic within Keyhouse and it’s one for the whole family.

A League of Their Own: Prime Video, August 12

An exclusive Prime series, this one brings back memories of Geena Davis and Tom Hanks in the original Penny Marshall 1992 classic.

It tells the story of an entire generation of women who dreamed of playing professional baseball.

Co-creators Will Graham and Abbi Jacobson said in a statement: “We grew up with Penny Marshall’s movie, and we absolutely love it – How funny and unpretentious it is, how flawed the characters are. We had a chance to talk to Penny before she passed away, and she told us that æthese stories changed my life, and they will for you too’.”

Jennifer Walters (Tatiana Maslany) says she’s not a superhero … but playing a She-Hulk and an attorney specialising in superhuman-oriented legal cases keeps this green-skinned 200cm action hero on her toes.

Thankfully, she’s joined by Mark Ruffalo as Smart Hulk in this nine-part comedy series, and Tim Roth as Emil Blonsky/the Abomination and Benedict Wong as Wong.

House of the Dragon: Foxtel/Binge, August 22

HOTD is set 200 years before the events of Game of Thrones, this highly anticipated prequel, based on the book Fire & Blood by George RR Martin, covers a turbulent time in the history of House Targaryen.

There are 10 episodes available to stream at the same time as the US at 11am AEST.

Binge executive director Alison Hurbert-Burns says in anticipation of the biggest show of the year, Binge attracted a record audience desperate to catch up on all eight seasons of GoT.

Told in the present tense, this one-hour documentary draws on previously unheard testimony and rare archival footage to examine the life and legacy of Diana, known as the ‘People’s Princess’.

The Thief, His Wife and the Canoe: Foxtel, August 18

So bizarre you couldn’t possibly make it up, this four-part British drama tells the true story of former teacher and prison guard John Darwin (Eddie Marsan), who faked his death in 2002 with the help of his wife, Anne (Monica Dolan), to claim life insurance and avoid bankruptcy, even deceiving his sons.

Inspired by real events, this series is set in a small Nottinghamshire mining town, where two shocking killings shatter an already-fractured community, arousing suspicion between families and reopening old wounds.

David Morrissey stars as DCS Ian St Clair, who is tasked with finding the link between the fatalities.

Following their recent Logies win for Most Popular Light Entertainment Program, the couch critics are back.

For almost eight years, they’ve had us laughing and crying along with them as they pass comment on the week that was, sharing their hilarious, heart-warming and delightful commentary.

Now for the Aussie content we have all been waiting for, cult favourite Superwog is here.

Filmed in Melbourne, this comedy features the suburbs of Sunshine North and Avondale Heights and was created by the comic duo brothers Nathan and Theodore Saidden based on their YouTube sketches.

Fearless: The Inside Story of the AFLW: Disney+, August 24

The first Australian Disney+ original series takes viewers on a raw and emotional journey into the dreams, struggles and triumphs of the groundbreaking AFLW league.

In this six-part series, we hear from the players who were told they could never play Australian Rules football at the highest level and made it happen.

It’s got Aquaman Jason Momoa in it, so fans were thrilled when the trailer was unveiled at the recent San Diego Comic-Con.

See is set in a brutal and primitive future, hundreds of years after humankind has lost the ability to see.

Set three days before Diana’s death on August 31, 1997, this documentary features never-before-heard interviews with those closest to Diana, and is put together by former detective and award-winning investigative journalist Mark Williams-Thomas, who sets out to uncover the truth in this one-hour exposé.

Nominations for the 2022 VMAs are in. And they include Jack Harlow, Kendrick Lamar and Lil Nas X (seven each) lead this year’s nominations, closely followed by Doja Cat and Harry Styles (six each), and Billie Eilish, Drake, Dua Lipa, Ed Sheeran, Taylor Swift and The Weeknd (five each).

The post August streaming guide: <i>House of the Dragon</i>, Owen Wilson a superhero, Buzz and MTV Awards appeared first on The New Daily.