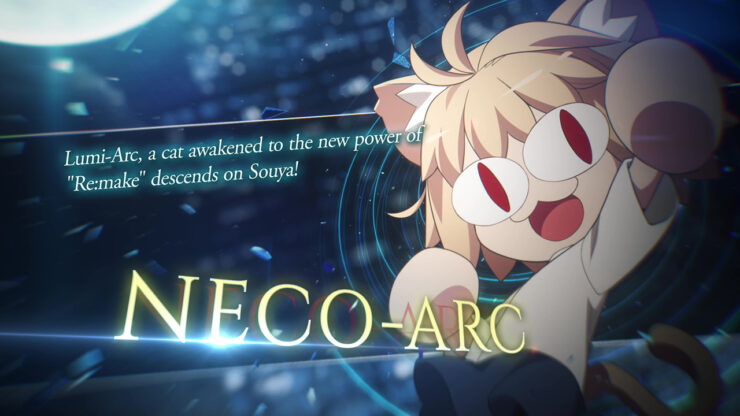 Melty Blood: Type Lumina has been out for under a year now and has seen various updates and new characters make the rounds, like Saber from the Fate series being a base-game inclusion. Today’s update isn’t any different, and subsequently, not one but two new characters will be joining the cast of Type Lumina.

The two characters are two brand-new entries in the series, Mash Kyrielight from Fate and… Neco-Arc. An internet meme that’s gained traction over the past few years actually made it to a fighting game as DLC (and that sentence isn’t of disapproval, just pure “how did we even get here” vibes). In all seriousness, how did we even get here?

Both characters each have a trailer, which you can see below.

[Info]
“Neco-Arc” will be available for free as a new playable character in “MELTY BLOOD: TYPE LUMINA”!
He will be available soon along with character stories and battle stages!
Please look forward to further news!
Buy now→https://t.co/KA7n32BbAC#MBTL pic.twitter.com/HTEsy0Qkmw

[Info]
“Mash Kyrielight” will be available for free as a new playable character in “MELTY BLOOD: TYPE LUMINA”!
He will be available soon along with character stories and battle stages!
Please look forward to further news!
Buy now→https://t.co/KA7n32BbAC#MBTL pic.twitter.com/u81cQe7VOU

Both characters have very short gameplay trailers that mainly show them in-engine rather than any concrete breakdowns. Neco-Arc is a little concerning immediately due to her very small size; that could very well make lots of characters have issues hitting her (think of Servbot in Marvel vs. Capcom 2). Either way, both characters will join the roster of Type Lumina this summer.

There’s also pricing information related to these two. You may be thinking, “do I have to pay money for these two?”, and the answer is no. Both Neco-Arc and Mash are free for all players to download when they release. What’s even better is that the next two DLC characters, whoever they may be, will also be free for everyone. Those two will arrive in Winter 2022.

Unfortunately, there isn’t any information available on who exactly will follow Neco-Arc and Mash Kyrielight as DLC, but we’ll continue to update as more information is released. Melty Blood: Type Lumina is available now on PlayStation 4, Xbox One, Nintendo Switch, and PC via Steam. In other news, a former Xbox executive has revealed that console wars were encouraged during the 7th generation of consoles to foster healthy competition between Microsoft and Sony.