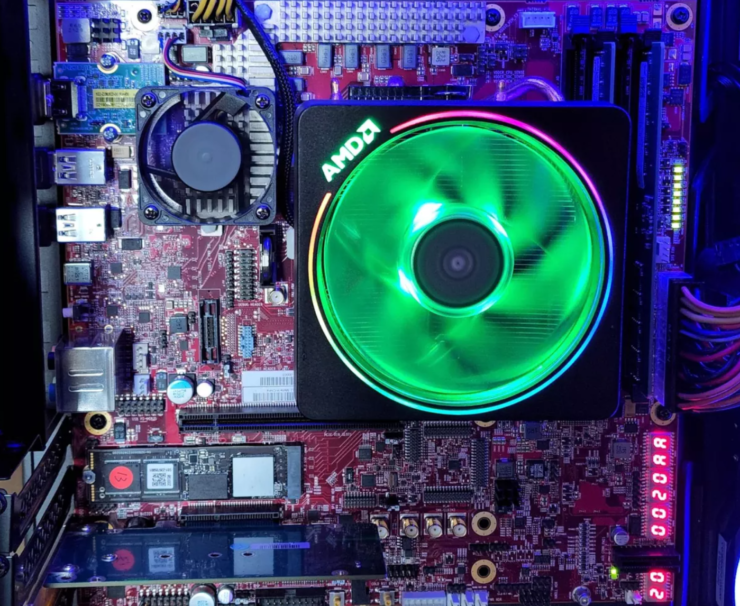 Phison has already announced a collaboration with AMD to usher in the era of Gen 5 SSDs for the consumer segment. The manufacturer already demoed its early E26 controller-based PCIe Gen 5.0 SSD prototype on an AMD Ryzen 7000 Desktop CPU platform, all running on an ASUS ROG X670E Hero motherboard. The previous demo reached PCIe Gen 5.0 transfer rates of up to 12 GB/s (Read) and 10 GB/s (Write) but it looks like Phison is taking things one step ahead.

Tomshardware was provided a preview of the demonstration where we can see a brand new PCIe Gen 5.0 SSD featuring the same PS5026-E26 SSD “E26” controller which is going to offer up to 14 GB/s transfer rates. The same SSD is based on Micron’s recently announced 232-layer NAND flash which offers the highest TLC density per square millimeter ever produced (at 14.6 Gb/mm²). The areal density is between thirty-five and one-hundred percent higher than competing TLC products in the market currently. Shipping in a new 11.5 mm x 13.5 mm package, the new 232-layer NAND features a 28% less package size than previous generations, making it the smallest high-density NAND available.

The Phison “E26” PCIe Gen 5.0 SSD was running on an AMD Ryzen 7000 “Raphael” reference CPU platform which comprises a 6 core and 12 thread SKU with an OPN code of “100-000000593-20_Y”. The same Zen 4 CPU has appeared several times in benchmarks and based on a recent leak from AMD itself, we can tell that it would definitely be the Ryzen 5 7600X. As for the motherboard, since this is a reference platform, an evaluation board was used which was running two DDR5 memory modules and we also get to see AMD’s Wraith cooler in action which is no surprise since the AM4 socket coolers will be compatible with the AM5 socket too.

As for the performance numbers, we are looking at 10 GB/s of read and write throughput within the CrystalDiskMark benchmark however, Phison assured Tomshardware that they have planned up to 12 / 11 GB/s sequential read and write speeds along with 1.5 / 2.0 Million random read and write IOPs. Phison claims seem plausible since 232-Layer NAND is still pretty new and the company has yet to optimize its PCIe Gen 5.0 SSDs based on the E-26 controller around it. The company will also be adding a brand new I/O+ firmware for its next-gen SSD solutions that will be optimized for Microsoft’s DirectStorage API and also AMD’s own Smart Access Storage technology or SAS which uses the API as its core framework.

We also get a close-up look at the M.2 SSD module itself which confirms the 2280 form factor. The large chip with the metallic IHS is the E-26 controller itself, we can also see a single DRAM module plus the two NAND Flash modules at the top. While this specific module doesn’t come equipped with a heatsink, Phison states that it will be necessary to achieve the best performance. This has also been stated in a previous interview with Phison. But from the looks of things, it looks like AMD will be the premiere choice for PCIe Gen 5.0 SSD hardware and we can expect some great support for the next-gen storage solutions on the Ryzen 7000 “Raphael” CPU platform.