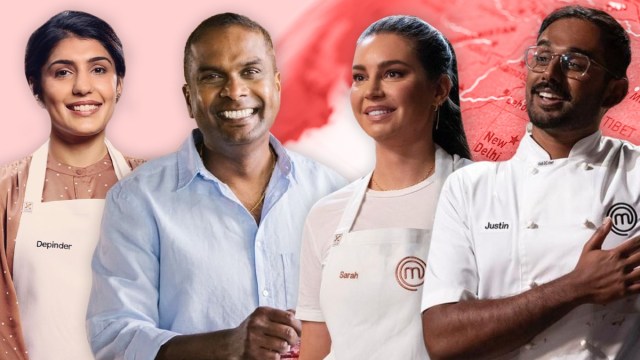 India has more than 900 private satellite television channels offering everything from comedy to live cricket, but one international show is winning over locals perhaps more than any other.

It’s not a soapie or a serial, but Channel Ten’s MasterChef Australia.

It is one of the most popular shows on Indian TV and is said to be a bigger hit in the country than the show’s Indian version.

There are many reasons, but it’s partly because the show regularly gives centre stage to Indian cuisine, providing a wave of inspiration to Indian cooks in the process.

Indians tune in to see contestants putting a fresh spin on their home-made dishes and pick up new techniques along the way.

“No one could’ve imagined that a TV program all the way from Australia could come here and alter our way of thinking,” he said.

“It’s not just a program – it’s fantastic market research from an entrepreneurial point of view.”

One Indian blogger (Edtimes.in) went one step further and said Indians were “crazy” for the show. They put it down to the judges, the chance to learn a new vocabulary with words like blast chiller and ganache, and the appearance of high-end celebrity chefs from around the world.

MasterChef Australia executive producer David Forster told The New Daily it’s all about mentoring the contestants who learn from the “best of the best in a supportive environment”.

“The Indian audience has always been appreciative and supportive of our contestants’ achievements on the show and beyond – and we couldn’t be happier that they are ‘crazy’ for [it],” he said.

Adds TV expert Steve Molk, from TVBlackbox: “The show has made stars out of many of the contestants, not least of which the winners, and especially into Asia and India where the Australian program is shown”.

“The casting is brilliant because the show leans heavily on a generosity of spirit within the contestants – there’s nobody being painted as the bad guy (except maybe a faulty oven) and so this only adds to their marketability, along with the food they champion as they cook,” he tells TND.

She is one of dozens of amateur cooks who have been inspired by Indian cuisine, or who have come from an Indian or south Asian background, to make a splash in the MasterChef kitchen.

And who could forget Kishwar Chowdhury’s humble Bengali dish panta bhat that took the world by storm last year?

TND asked Sashi Cheliah, the first chef of Indian heritage to win MasterChef Australia, why he believed the show was so popular in India.

Mr Cheliah, who returned to the show this year after winning it in 2018, said MasterChef has had a “big cult following” for several years.

“All over India, north, south, there’s a very big audience for MasterChef Australia,” he said.

“Being of Indian origin, I was able to connect easily. Born and brought up in Singapore, I had a bit of South-East Asian influence and people liked the idea of me incorporating Indian food with modern techniques and also being experimental with unique ingredients to create something different.

“There were also authentic dishes which I spoke a lot about. People liked the exposure of you talking about food to the world. Introducing the culture and authentic flavours.

“I also used authentic names in the show. If it’s rasam [a South Indian soup], I’ll call it rasam.

“People can relate to the words I used about dishes, the origins of the dishes, so people could connect and relate to the cuisine I was cooking.”

‘It’s changing the way we eat’

MasterChef Australia is broadcast on Indian network Disney Star and among the network’s flagship shows. In fact, Disney Star went so far as to credit the show with “transforming India’s food culture”.

“Until about 15 years ago, the average urban Indian had limited options when it came to dining out. This translated into limited knowledge about the intricacies of international cuisine,” the broadcaster wrote on a website page dedicated to MasterChef.

“Today, however, it’s not unusual to hear a nine-year-old commenting on the plating and presentation of dishes, or using terms like ‘molecular gastronomy’, or perhaps complaining about their pasta not being ‘al dente’.”

Former head chef at The Table and Magazine Street Kitchen in Mumbai, Alex Sanchez, said the culinary landscape in India has changed dramatically in recent years.

“When I first came here six years ago, people lacked exposure. They used to come to the restaurant and ask for spaghetti ‘well done’,” Mr Sanchez told Disney Star.

“But now, I feel like they really speak gourmet. Nowadays, people really appreciate and really understand the amount of effort and work that’s going into the food they’re receiving.”

Kelvin Cheung, the chef behind Ellipsis, Bastian, and One Street Over in Mumbai, watches the show to stay on top of global food trends and credits it with helping change tastes in India.

“The Indian general population now understand the amount of work that goes into gourmet food,” he told Disney Star.

“It’s changing the way we eat.”

Mr Cheliah, who has just done a four-city tour for a hotel group in India, and is about to open his own restaurant in Chennai, said he received more messages from fans after being eliminated on the show this year than after his 2018 win.

“I was getting so many messages from around the world from the time I was in the show to when I got eliminated. Massive, massive response,” he said.

Fish curry with cumin rice, sambal prawn with crispy prawn heads and herb salad and Malaysian pineapple tart with lime ice-cream were just a few of his masterpieces.

“Fans were devastated. They couldn’t accept the fact I left. The response was massive, bigger than when I won. People from all over the world, not only India, but South Africa, Europe, so many messages,” he said.

“I was in India recently doing a four-city tour for a hotel group, and every hotel I went to, everyone is still talking about the show. The response is still massive.

“People treat you like celebrities. The respect, the warmth you get from the audience, including the hotel chefs.”

An ‘exciting and delicious food cycle’

Mr Forster said MasterChef Australia was one of few programs on TV that celebrates “food and cultural diversity”.

“We love it when our show connects with people in other countries. Australia’s celebrated multicultural society results in a world of food and food expertise being present in the community here.”

Seeing dishes from audiences’ own cultures is also part of the mass appeal as contestants dig deep into their own cooking memories from childhood or growing up in a particular region.

“We love watching a contestant prepare dishes from their home in coastal Tasmania, or their mother’s classic from Malaysia, or their own experience with dishes growing up in India,” Mr Forster said.

“By bringing their cultural recipes to the MasterChef Australia kitchen, they evolve them from their traditional, local roots.

‘‘Those recipes, in turn, are displayed on the program which evolve the cuisine even further.

“It is an exciting and delicious food cycle.”

The post Why <i>MasterChef Australia</i> is a bigger hit in India than its own version of the show appeared first on The New Daily.