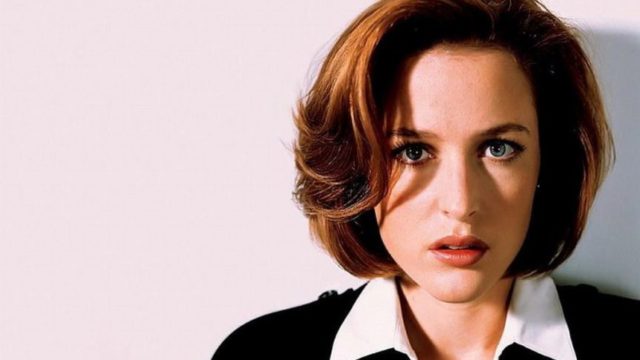 In the middle of lockdown, I decided I needed a project. Something that would require no sewing skills, no wrangling of sourdough yeast and no need to leave the house.

That’s how I discovered The X-Files, almost 30 years after the sci-fi series first aired in 1993.

Even though it was this touchstone of everything I knew about pop culture, I’d never seen it. The original series alone stretches to 150 hours in length, and it always felt like too much of a commitment.

Now, in stage 4 lockdown, all I had was time.

And as I started watching, I discovered something else – the Scully Effect, a real-world phenomenon involving a generation of young women.

There’s something about Scully

You may have forgotten the specifics, but the premise of the show will be familiar: Fox Mulder and Dana Scully are FBI agents who work together on a project called The X-Files – unsolved, unexplained, usually paranormal cases, outside the Bureau mainstream.

The characters have inspired legions of fans over the years, especially for Dana Scully, played by actress Gillian Anderson.

Jessica Ware, a curator of invertebrate zoology at the American Museum of Natural History, remembers being wowed by Scully.

“She brought knowledge, so her contribution to the dialogue was actual evidence or facts or experimental design, or rational thought,” she told ABC RN’s Life Matters.

Dr Ware, a self-confessed “sci-fi aficionado”, started watching The X-Files when she was studying marine biology at the University of British Columbia.

As a weekly tradition, the women in her dormitory would gather in their common room to watch The X-Files on Friday nights.

Although she’d been a big fan of earlier sci-fi series like Doctor Who, Dr Ware says there was something different about this show.

“What I was used to seeing was a female sidekick who offered commentary that was used for humour, [or] for romantic plot,” Dr Ware explains.

But Scully was no wallflower. Instead she was the show’s pragmatic sceptic, plucked from medical school at Stanford University, while her colleague, Mulder, “muddied the waters and confused the plot”.

“[Other characters] respected her and looked to her for her guidance because she was smart. That, I think, really resonated with us,” she says.

A phenomenon is born

Dr Ware wasn’t the only scientist inspired by Scully.

The fictitious FBI agent inspired a generation of young women to pursue careers in STEM (science, technology, engineering and math), a phenomenon that even has its own name: the Scully Effect. It’s been noted in STEM circles for years.

In 2018, 21st Century Fox tasked the Geena Davis Institute on Gender in Media, a non-profit research organisation, with finding out whether there was any hard truth to the phenomenon.

The researchers surveyed more than 2000 women to examine what they thought about STEM and how they perceived Scully.

“Among the women who are familiar with the character, 50 per cent say Scully increased their interest in STEM [and] 43 per cent say that they considered working in STEM because of her,” says Madeline Di Nonno, the institute’s CEO.

The survey also found women who watched more X-Files episodes had an increased likelihood of working in STEM fields.

“With medium and heavy viewers, 50 per cent were more likely to have worked in a STEM field because of how she was depicted,” Ms Di Nonno says.

“And among women who are familiar with the character, 91 per cent said that she was a role model for girls and women.

“Two-thirds of the women [surveyed] that work in STEM today say [Dana Scully] served as their role model.”

‘She was often the only one’

For Dr Ware, that representation was important – it was something missing in the real-life laboratories she worked in.

Scully was often the only woman in the labs – and that reflected reality.

“When we pictured a scientist, we wouldn’t have pictured someone who looks like Scully,” she explains.

We would have pictured an Albert Einstein-type scientist, probably a white male.”

On top of the gender disparity, Dr Ware says there also “weren’t that many black women going into marine biology and entomology at UBC”.

But she says drawing attention to the lack of diversity in her laboratory would have been “very gauche” at the time.

Now, she says it’s much more common to discuss diversity in the field.

“As mentors, as advisors, as professors, when we talk about this with our lab, I think it breaks down some of the stigma,” she says.

According to the US Bureau of Labor Statistics, women make up only 28 per cent of the workforce in STEM fields.

It’s even worse in Australia, according to the federal government’s STEM Equity Monitor. It shows women accounted for just 14 per cent of people in STEM-qualified occupations in 2019, and women accounted for less than a third of the workforce in STEM fields of research in 2017.

Although Dr Ware says men still outnumber women in the laboratory, she’s hopeful that greater representation in fictional form will expand the possibilities for future generations.

Decades after Anderson first graced the small screen as Special Agent Dana Scully, modern films and television shows have given us a new generation of scientists and thinkers.

When she first saw 2018 science fantasy adventure film A Wrinkle in Time, Dr Ware remembers weeping at the depiction of star character Meg Murray, a young girl enchanted by science and math.

“I was crying because there was a black woman scientist as a lead in a movie. I had never experienced that in my entire life, having someone who looked like me as a scientist who was smart and who was figuring stuff out on a on a big screen,” she explains.

“It can really change your whole perception on what is possible when you get to see yourself reflected in those roles.”

What’s clear to me as a new fan, just past the 110th episode, is how hopeful The X-Files is, even decades after it was made.

This is a series that takes us on a fearless journey into the great unknown, to solve the impossible mysteries of the universe.

When it’s down to the wire, it’s Scully’s resilience that sees her persevere despite the odds – which is a fitting takeaway for the pandemic we’re now in.

At least, that’s what I want to believe.

The post <i>X-Files</i> and the ‘Scully Effect’: Fake aliens, real-world phenomenon for women in STEM appeared first on The New Daily.