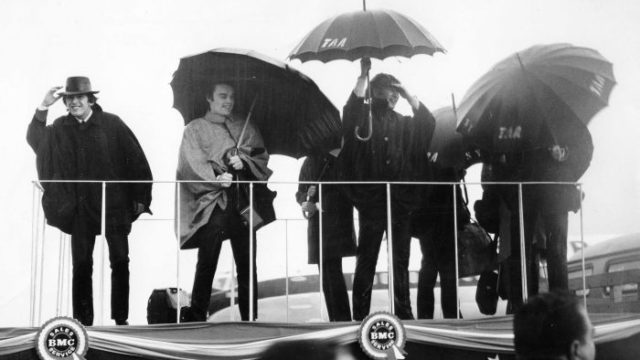 Four chaps with schoolboy haircuts and easy smiles were about to change pop culture forever.

On October 5, 1962, they released their first record: the single Love Me Do.

Within a year they were well on their way to becoming one of the best-known bands in the world at the time.

A hysteria known as Beatlemania would drive hordes of ordinarily sane fans into sobbing, screaming messes whenever the Liverpool band did so much as step out in public together.

God forbid you made it to a concert – the screams of the crowd were so loud they often drowned out the band.

It became so bad that the band actually retired from touring in 1966, it was just impossible to play live.

They’d go on to release five more albums before finally calling it a day in 1970.

The record that started it all was Love Me Do, part of which Paul McCartney is believed to have written years before as a teenager.

He and John Lennon went on to create the final piece together.

“Love Me Do’ was completely co-written. It might have been my original idea but some of them really were 50-50s, and I think that one was,” McCartney said in Many Years From Now.

“It was just Lennon and McCartney sitting down without either of us having a particularly original idea.

“We loved doing it. It was a very interesting thing to try and learn to do, to become songwriters. I think why we eventually got so strong was we wrote so much through our formative period. Love Me Do was our first hit.”

Through interviews he did before his untimely death in 1980, it was clear Lennon didn’t share quite the same sentiments as his bandmate.

He always intimated it was McCartney’s song, and had been since he first started its simple composition years previously.

In Anthology, Lennon talks of how the song helped the band make the leap from performing other people’s songs, to creating and presenting their own tracks.

“Introducing our own numbers started round Liverpool and Hamburg. Love Me Do, one of the first ones we wrote, Paul started when he must have been about 15. It was the first one we dared to do of our own,” Lennon said.

“This was quite a traumatic thing because we were doing such great numbers of other people’s, of Ray Charles and [Little] Richard and all of them.

“It was quite hard to come in singing Love Me Do. We thought our numbers were a bit wet. But we gradually broke that down and decided to try them.”

Drummer Ringo Starr described the release of the track as a “turning point” for the group.

“For me that was more important than anything else. That first piece of plastic,” Starr said in 1978.

“You can’t believe how great that was. It was so wonderful. We were on a record!”

For anyone lucky enough to have a copy of that debut Beatles record, keep it somewhere safe – extremely rare versions of the 7-inch (which feature McCartney’s name misspelt) can fetch nearly $US15,000.

The post On This Day: Beatlemania begins with <i>Love Me Do</i> appeared first on The New Daily.