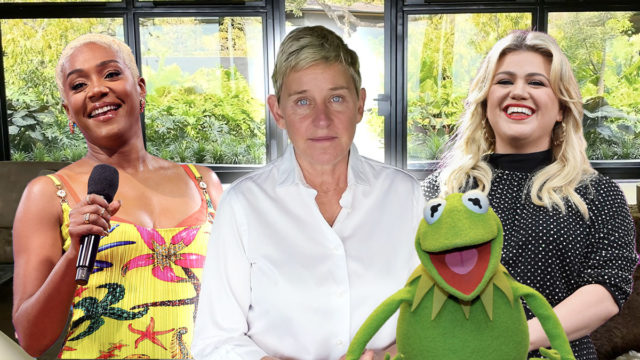 Rumours are swirling around who will replace the queen of daytime television, Ellen DeGeneres, as she prepares to cancel her show after 19 seasons.

Comedian Tiffany Haddish (Girls Trip) is reportedly a frontrunner, but could be in competition with an unlikely contender.

The Ellen DeGeneres Show currently holds the coveted 3pm slot in the US, but since DeGeneres owns the rights to her show, whoever replaces her will need to create a new format.

The show has been missing from our screens in Australia since August, when the Nine Network pulled it over ongoing allegations of workplace bullying.

A senior NBC Universal source was singing Haddish’s praises, but nodded to the workplace toxicity investigation that signalled the beginning of the end for DeGeneres.

“Tiffany is a favourite. She has humour and empathy in spades,” the source told Page Six.

“She’s top of the list to get a daytime show – she’s a fresh voice.”

Critics on social media have been slightly less favourable in their opinions on the potential switch, suggesting that Haddish might not have the skills necessary for a hosting gig.

The gig wouldn’t be a first for Haddish, as the 40-year-old filled in for DeGeneres before in October and again in April.

She is also the host of CBS’ Kids Say The Darndest Things, and has a number of stand-up comedy specials.

Despite receiving a glowing report from NBC executives, there is a chance Haddish’s hosting opportunity might fall through, especially with another contender eyeing the 3pm window.

Singer and 2002 American Idol winner Kelly Clarkson might also make a grab for the desirable slot, moving her current show which is on directly after The Ellen DeGeneres Show, to a more profitable time.

The 39-year-old made her daytime television hosting debut in 2019 with The Kelly Clarkson Show, and in her short reign, has managed to snag three Daytime Emmys.

She also won the Emmy for best entertainment talk show host, and recently matched DeGeneres’ ratings for the first time.

Although Clarkson’s positive ratings and experience put her at an advantage, social media fans have a few other options in mind.

#ReplacementsForEllen was trending on Twitter, with users putting all sorts of possibilities forward for the newly vacant position.

One fan suggested DeGeneres’ lookalike, Owen Wilson, would be a great fit.

Others proposed a parody show featuring Kate McKinnon pretending to be DeGeneres.

It’s been years since his last gig, but Kermit the Frog might actually bring some honesty and ethics to the show.

There certainly won’t be any bullying on his watch.

But if things don’t work out for Kermit, Clarkson or Haddish, there is another seasoned talkshow veteran who would be well suited for the role.

The post Which daytime TV queen will reign supreme? The competition to replace Ellen DeGeneres heats up appeared first on The New Daily.