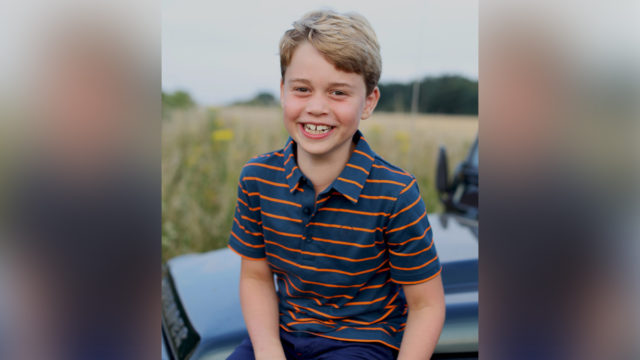 The Duke and Duchess of Cambridge have released a new photo of their eldest son, Prince George, to mark his eighth birthday.

In the picture, George, who turns eight on Thursday, is dressed casually in a striped navy and orange polo shirt with matching shorts and a beaming smile.

The shot was taken by his proud mother – Kate Middleton has made a tradition of sharing her own photographs of her three children to mark their birthdays.

The snap was taken in Norfolk earlier in July. In an apparent nod to his recently deceased great-grandfather, the third in line to the British throne sits atop a Land Rover Defender. That was the vehicle of choice for the Queen’s husband, Prince Philip – whose casket was carried on a customised version of the vehicle at his funeral in April.

Prince George’s casual wear in his birthday photo is a marked change from his last appearances in public.

He attended the Euro 2020 semifinal and final at Wembley earlier in July, clad in a suit and tie. Young George delighted the crowd with his emotions throughout the game, hugging his parents in victory and then thoroughly unhappy at England’s death-knock finals loss.

In June, he was snapped with younger sister Princess Charlotte and dad Prince William helping to start a Father’s Day half-marathon at the Queen’s Sandringham estate.

But generally, the Cambridge children have been largely out of the public eye in recent months. Last year, Kate did reveal a bit about how the family had adapted to life in quarantine and homeschooling.

“[Youngest son] Louis doesn’t understand social distancing. He goes out wanting to cuddle anything, particularly any babies younger than him,” she told the BBC.

“My children [also] have bottomless pits. I feel like a constant feeding machine.”