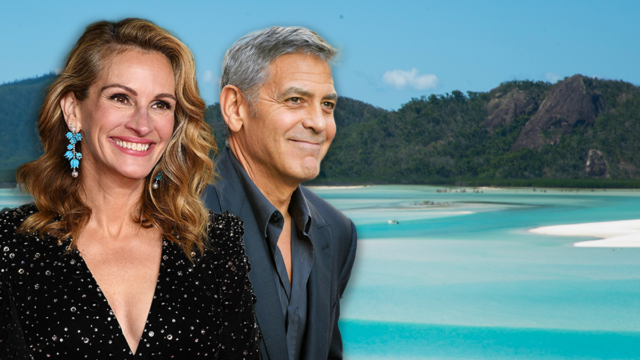 Academy Award winners George Clooney and Julia Roberts are packing their bags and heading to Queensland for two months over summer to film new romantic comedy Ticket to Paradise.

It’s one of at least 15 feature movies and TV series under way (or already in post-production) over the coming months as Australia becomes, once again, the golden child of the international entertainment industry.

Although several productions, including Russell Crowe’s Poker Face, managed to continue in lockdown in New South Wales, Queensland is the mecca, and for good reason.

With few or no COVID-19 interruptions, which spell disaster for productions on tight budgets and schedules, the Sunshine State has been able to sustain the industry over the past 18 months.

“We now have producers and directors, some of whom had never previously worked in Queensland, keen to return based on their positive experience, the locations, quality of crews and world-class facilities,” she said.

This time they’ll be throwing down the VIP red carpet on shooting locations across the Whitsundays, on Long Island and on Hamilton Island to accommodate (after quarantine) the Clooney and Roberts entourages.

Roberts will have her cinematographer husband Danny Moder and children Hazel, Phinnaeus and Daniel along for the ride.

Although it’s unclear where they’ll bunker down over Christmas and New Year, the newspaper says several of Hamilton Island’s luxury private homes are booked out for the A-listers, and production teams are turning the Palm Bay Resort on Long Island into a Balinese paradise.

“It has been very interesting that while the last 18 months has been very difficult for so many industries, thankfully the film industry has been able to continue in Queensland under strict COVID safe practices which has meant Village Roadshow Studios has never been so busy,” Ms Benzie said.

“While we were fortunate to have Baz Luhrmann film his project in 2020-21 [Elvis], since the production finished the studios have been inundated with several new projects.

“Some projects were able to base their whole production on site and some productions were only able to get a sound stage and found offices close by to the studios.”

There are currently five productions on site, and some have booked space up until mid-March next year.

“Crew applications have also increased and there has been a crew shortage in multiple areas,” Ms Benzie said.

“With COVID restrictions around each state, it has been difficult for crew to move around, so everyone has had to be creative in growing crew levels and utilise the Screen Queensland attachment scheme.

“City of Gold Coast [where Village Roadshow Studios are based] also increased its production incentive. It is the only council in Australia that provides an incentive and is currently looking at ways to increase the skills shortage gap.

“The industry provides millions into the economy, which we need to continue. As borders start to reopen it will create more opportunities, domestically and internationally.”

Ticket to Paradise puts Australia back in the game

It’s not the first time the superstar duo have teamed up for a big-budget flick, and with the chutzpah that Hollywood royalty Clooney and Roberts will bring, it sets up the industry for a much better 2022.

All should go well. The pair have known each other a long time.

She also starred in tragicomedy August: Osage County (2013), which was produced by Clooney.

In 2014, the pair sat down for an interview with Vanity Fair, where they revealed they first met in 2000 in a hotel room at the Chateau Marmont in West Hollywood when Clooney was casting for Ocean’s Eleven.

He described her as “elegant”. She says she has to have a sense of “camaraderie” on a film set. “That’s how you and I function,” she said to Clooney, adding that George and Co. gave her a Tiffany diamond bracelet when Ocean’s Eleven wrapped up.

On the eve of the London Film Festival premiere of his latest directorial piece The Tender Bar, starring Ben Affleck, Clooney told Deadline exactly how he was preparing for his gig Down Under.

He revealed he had adopted a “keto-based regimen to drop pounds to be ready when he has to jump in a pool shirtless” in Ticket to Paradise.

Back in March, the federal government announced a $6.4 million grant for the film, in which Clooney and Roberts play a divorced couple who travel to Bali (for which the Whitsundays will be standing in) to attend their daughter’s wedding.

It’s expected to rake in $47 million and create more than 270 jobs.

Christmas on the Farm (Stan)

Starring Australian-American actor Poppy Montgomery (Reef Break, Unforgettable, Without A Trace) and Hugh Sheridan (Five Bedrooms, Packed to the Rafters), the film will deliver another $3.4 million and 150 jobs for cast and crew when filming gets under way this month.

Filming at Mission Beach in Far North Queensland will begin soon for the 10-part, fish-out-of water drama about an American criminal who bungles a heist and is forced to hide out in a small Australian reef town posing as the new church reverend.

Filming at Screen Queensland Studios and on location throughout Brisbane and south-east Queensland, the series will star John Cameron Mitchell (Hedwig and the Angry Inch) as the mulleted gay cowboy with a penchant for big cats.

The post And just like that, Hollywood movie houses are returning Down Under appeared first on The New Daily.