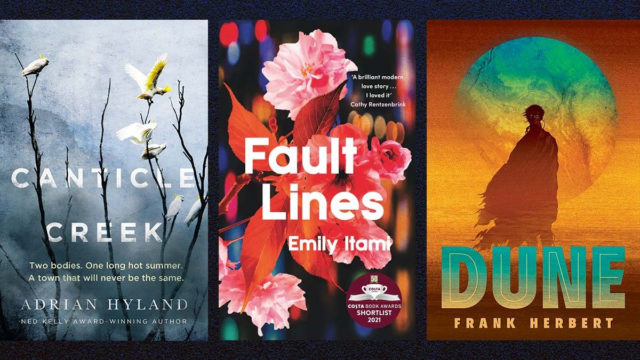 Excited to escape into a magnificent book this summer?

We’ve drawn from the past year and from upcoming titles to produce this list of 25 suggestions.

The Maid by Nita Prose

Molly the maid is used to being invisible at the Regency Grand Hotel.

That is, until she discovers an infamous guest dead in bed, and sets out to find the killer.

The murder mystery is already being turned into a film with Black Widow’s Florence Pugh set to star.

The Queen investigates a murder at Buckingham Palace, so think of this as The Crown meets Agatha Christie with a lot of laughs.

As Ms Bennett stresses: This is absolutely a work of fiction.

Sydney’s Cinnamon Gardens Nursing Home is filled with residents with colourful histories, each with their secrets, triumphs and failings.

This is a love letter to storytelling and the families we create for ourselves.

Perfect for lovers of Australian rural crime thrillers, such as The Dry by Jane Harper and Scrublands by Chris Hammer.

The First Day of Spring by Nancy Tucker

She just killed a boy and it gave her a fizzing, sherbet feeling in her belly.

Fifteen years later, Julia is now a mother to her five-year-old daughter, but her past is catching up to her.

A sentence can’t do this unforgettable book justice.

It is a powerful psychological drama about the effects of neglect and loneliness on a child.

The Midnight Lock by Jeffery Deaver

Believe it or not, The Midnight Lock is the 15th instalment in Deaver’s Lincoln Rhyme series.

The first book, The Bone Collector, was adapted into a film of the same name in 1999 that starred Denzel Washington and Angelina Jolie.

It was most recently turned into a TV series in 2020.

It’s not for the faint-hearted.

Girl A by Abigail Dean

Girl A went crazy viral at the start of the year.

The book follows successful New York lawyer Lex Gracie, who was the subject of national news as a child after she escaped her family of religious fanatics.

And when her mother dies in prison, Lex must revisit her childhood.

Her adult children are shocked, but hesitant to report her missing.

They know their father will be the prime suspect and he’s acting kind of strange.

What does that say about the Delaney family and what else are they hiding?

From the author of Big Little Lies and Nine Perfect Strangers.

Zoe Kelly is an intern at an online media company who decides to write about her bad online dating experiences.

Social Queue is a delightful and heart-warming autistic story about deciphering the signals of attraction as a young adult.

Elle Bishop needs to choose between the life she has built with her much-loved husband, Peter, and the life she imagined would be hers with her childhood sweetheart, Jonas, if a tragic event hadn’t altered their lives forever.

This book spans both the 24 hours after a dramatic encounter and the 50 years leading up to the moment.

Never Fall for Your Fiancée by Virginia Heath

If you enjoyed Bridgerton, there’s a very strong chance you’ll like this.

Think: A charming earl, a witty woman, and a fake engagement in the regency era.

Consider this a fun, cute and easy read for the silly season.

Fault Lines introduces us to Mizuki, a disenchanted Japanese housewife who is frustrated with motherhood, marriage and the cultural expectations Japan puts on women.

And then she meets Kiyoshi, a man who reignites her free-spirited soul.

Set on the campus of a university in Sydney, Love & Virtue explores the themes of love, friendship and class.

“We’ve struggled to keep this debut novel on the shelves,” Mr Rubbo told The New Daily, adding that it’s one for fans of Sally Rooney (author of Normal People).

She Is Haunted  by Paige Clark

She Is Haunted can only be described as ethereal.

It’s a collection of short stories that explore identity, grief, connections and, most importantly, the love of a good dog.

When Things are Alive They Hum by Hannah Bent

Marlowe and Harper share a bond deeper than most sisters after their mother died when they were children.

Now 25, Marlowe is living her own life abroad.

But then she receives the call that Harper’s heart is failing.

She needs a heart transplant, but has been denied one because she’s living with a disability.

What lengths would you go to save your sister?

Beautiful World, Where Are You by Sally Rooney

This is the third novel by adored Irish author Rooney, who is often touted as the literary voice of millennials.

Much like her first two books, Beautiful World‘s themes include romance, friendship and class-consciousness, as well as climate anxiety.

Klara and the Sun by Kazuo Ishiguro

Klara and the Sun is the eighth novel by Ishiguro, the 2017 winner of the Nobel Prize in Literature.

Ishiguro is very good at writing beautiful yet painful-to-read books about the inevitability of human failing.

If not failing then death. If not death then love – sometimes in that order.

His works aren’t exactly light reading, but they are deeply moving.

Bewilderment tells the story of a recently widowed scientist who seeks an experimental treatment for his troubled son.

Mr Rubbo said this is a fantastic book, which covers some of Powers’ main themes of climate change and the degradation of our environment.

It’s difficult to summarise Dune in one or two sentences – 600 words, maybe.

But as Mr Rubbo said when he recommended the title, many people will be revisiting this classic of the sci-fi genre with the release of the film.

“I’m sure it will find many first-time readers this summer, too. It’s extremely entertaining,” he said.

The Promise by Damon Galgut

The Promise, the Booker Prize winner of 2021, charts South Africa’s transition out of apartheid through the perspective of the land-owning Swart family.

Although it’s not exactly easy reading, Mr Rubbo said it’s very moving and one of his favourite novels of the year.

Who Gets To Be Smart: Privilege, Power and  Knowledge by Bri Lee

This is a timely exploration into class and privilege in Australia, particularly with regards to our education system.

That said, Lee also traces the Black Lives Matter movement in Australia, as well as language and colonialism.

Lies, Damned Lies offers an insight into the stark reality of the ongoing trauma of colonisation in Australia.

It will challenge you to see colonisation as a process, not an event.

When narcotics agent Shobbrook took on an investigation, codenamed ‘Operation Jungle’, his career within the Federal Bureau of Narcotics was on the rise.

But what he found triggered a chain of events that not only ruined his career, but led to the disbanding of the Narcotics Bureau.

Dr Rebecca Ray, Australian clinical psychologist and author, shows how boundaries are the key to many of the emotional and practical difficulties we encounter in daily life.

“This is the third instalment of Garner’s diaries and possibly my favourite,” Mr Rubbo said.

How to End a Story traces the tumultuous end of Ms Garner’s marriage to fellow writer Murray Bail.

Although it is a memoir, Rubbo said it reads like a novel and is “highly addictive”.