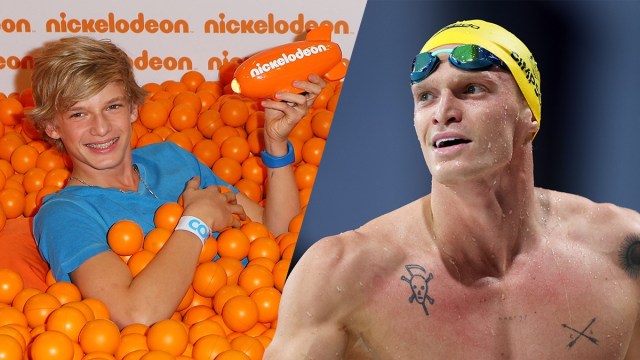 Simpson was awarded a gold medal at this year’s Games for his part in the 4×100 metres freestyle relay team.

Simpson swam in the semi-final, with the team going on to win the final.

Just two years ago, Simpson was fully dedicated to his music career when he made a life-changing pivot, committing to making his childhood dream of becoming a professional swimmer a reality.

Before swimming victory, Simpson became a household name in Australia and the United States aged 13 upon the launch of his pop music career.

Simpson, born and raised in the Gold Coast, began posting music covers to his YouTube channel back in 2008.

His life changed drastically when he was scouted by a music producer, who offered him a record deal with Atlantic Records.

Simpson made the difficult decision to relocate to Los Angeles, putting his blossoming swimming career on hold in order to pursue a career in music.

With the bubblegum-pop earworm and his tousled blond hair, Simpson quickly won over legions of international fans, becoming Australia’s answer to Bieber.

iYiYi quickly rose up the charts, peaking at No.19 on the ARIA chart and No.12 on the US Bubbling Under Hot 100 chart.

Along with the success of his EPs 4 U and Coast to Coast came a string of concert appearances, supporting Bieber in several of his shows on his Believe world tour.

And with Bieber’s manager ‘Scooter’ Braun enlisted to boost the young star’s career, Simpson’s singing career was off to a swimmingly good start.

But his relationship with his record label quickly soured. He declared in August 2014 that he was ‘‘finally free’’ from the constraints of his label and would be pursuing music as an independent artist.

‘‘Finally free. For the moment I’m an independent artist. Got a cool project coming this year and then working on my first true solo album,’’ Simpson tweeted.

Simpson appeared to take aim at Atlantic Records for its attempts to turn him into a manufactured pop star.

‘‘No more beats. No dancers. Just live instruments. Just me on the guitar and my band accompanying. The way I wanted to do it all along.’’

Since his departure from his label, Simpson’s music has taken a far more acoustic direction, since releasing four full-length albums as an independent artist.

Although his record deal perhaps didn’t pan out as he’d wished, Simpson spent the better part of a decade living in the US pursuing his music career as an independent artist.

In the meantime, he was rubbing shoulders with some of young Hollywood’s biggest and brightest stars.

He revealed earlier this year that his first girlfriend was Kylie Cosmetics mogul Kylie Jenner.

Little detail has been shared about their relationship, but Simpson told Nova FM’s Fitzy and Wippa earlier this year that the pair started dating when they were both 15 years old.

Jenner was the first in a long series of famous partners for Simpson.

Cyrus and Simpson’s relationship was brief, calling it quits after 10 months in August 2020.

Simpson began trialling for the Olympics near the end of their relationship, and admitted his gruelling training played a key part in their split.

‘‘I’d just started training towards the end of our relationship and it put me on a path where I realised I was going to go back to Australia if I was going to do it properly,’’ Simpson told the Sunday Telegraph.

Simpson’s decision to get back to swimming after so many years might appear left of field, however it was anything but.

It appears that a knack for swimming runs in the Simpson family. Both of his parents, Angie and Brad, were elite swimmers.

And it appears Cody followed in Brad’s footsteps, his father being a member of Australia’s 1994 Commonwealth Games squad in Canada.

Spookily, Brad was a silver medallist in the men’s 100 metres and 4×100 metres relay – the same race in which Cody won his first gold.

When Simpson told his parents that he planned to give up his glamorous life in Los Angeles to pick up swimming again, his mum admitted she had her reservations.

‘‘I feel like a really bad mum because I actually did everything I can to discourage him,’’ Angie told Sunrise after her son’s gold-medal win.

Angie said she doubted her son could make the transition from his Hollywood lifestyle to a gruelling training schedule. But ultimately, her son proved her wrong.

‘‘Being a former swimmer myself, I was like ‘Are you kidding? You’re singing, travelling the world, partying till late. Why would you go back to a black line, the solitude of the sport when you’ve got this lifestyle of travelling and everything?’

‘‘I didn’t think he could transition from so many years of that to then go to that isolation,’’ she said.

Aussie swimming legend Ian Thorpe, who has become somewhat of a mentor for Simpson, didn’t share Angie’s reservations in the slightest.

‘‘I’ve seen Cody’s level of dedication to this. Cody in the backyard pool doing laps on what we call a bungee cord or a tether, by himself just getting better and better each week,’’ Thorpe told The Project.

‘‘I knew that he was serious about it. I also know what he was able to do when he was a young swimmer and so knew that there was a prospect that he’d be able to get back in and swim well.’’

Looking to the future, it’s clear that Simpson has left his pop idol days in the past.

But Simpson recently reassured his fans that his music career was still very much alive and well.

He told Channel 7 that he would be going back to music and touring once he’s done swimming.

“I knew that I’d be just putting it on the side for a while, while I came back to the sport,’’ Simpson said.

‘‘I remember just pretty much working 365 days a year from the age of 14 but just loving every minute of it, and will continue to, long after I finish swimming.

“I’ll definitely be getting back on tour once this is all done.”

Simpson narrowly missed out on a bid for the Tokyo Olympics, but he has his sights set on the 2024 Olympics in Paris.

He’ll likely head there along with girlfriend Emma McKeon, Simpson’s teammate and the most decorated athlete in Commonwealth Games history.