More benchmarks of AMD’s Ryzen 7 4700G Flagship Renoir APU have leaked out and this time we get to see an even more impressive overclock than before. The AMD Ryzen 7 4700G is aiming to be one of the most impressive chips from AMD in terms of overclocking potential as has been shown with the latest benchmarks by ITCooker (via HXL).

We have already seen some impressive performance capabilities of the AMD Ryzen 7 4700G APU which is the flagship chip in the Renoir Desktop APU family. From superb memory to stunning OC support, the Ryzen 4000 APUs are shaping up to be quite the performer in all regards. Most of the leaks have been coming through ITCooker who has consistently been supplying fresh leaks for the chip and the latest one shows that the Ryzen 7 4700G has a lot more room to offer when it comes to overclocking.

The CPU-Z screenshot he provided shows that the Ryzen 7 4700G is based on the 7nm Zen 2 core architecture. It features 8 cores, 16 threads, 4 MB of L2 and 8 MB of L3 cache for a total of 12 MB cache. This is definitely lower than the 32 MB of L3 cache which the 8 core Ryzen 7 3800X features but this is due to the monolithic nature of the chip which relies on a single package rather than the chiplet based design on the Ryzen 3000 ‘Matisse’ series desktop processors.

The CPU features a base clock of 3.60 GHz and a boost clock of 4.45 GHz which matches the earlier specifications leak. The CPU operates with a 65W TDP and is compatible with the AM4 socket. The graphics side features the enhanced 7nm Vega GPU which comes with 8 CUs to form 512 cores. Its clocked at 2100 MHz on the GPU side which makes it one of the fastest clocked integrated graphics chip.

The latest set of benchmarks were conducted on the B550 AORUS Master motherboard & from IT Cooker himself, the motherboard seems to offer much better memory tuning & overclock support than the previous two B550 motherboards he used (ASRock B550 Taichi & ASUS ROG Crosshair VIII Impact). Two 8 GB DDR4 DIMMs were utilized along with a 360mm Cooler Master ML360R cooler.

For the memory overclock, the CPU was configured to 1.3875V and a 45.25x multiplier was used so that means the Ryzen 7 4700G APU was hitting 4.525 GHz across all 8 cores. The two patriot DDR4 memory sticks were configured to run at 4400 MHz (CL14) and during the testing, IT Cooker that the platform achieved a 1:1 FCLK with the Infinity Fabric link hitting 2200 MHz. For comparison, IT Cooker also tested the Ryzen 7 3700X on the same platform which could only hit 1900 MHz FCLK. The Renoir platform reportedly delivers 10ns lower latency than the Matisse platform which bodes really well for the upcoming Ryzen 4000 APU lineup.

Versus the Intel Core i9-10900K, the Ryzen 7 4700G posted 5% higher single-core and 15% higher multi-thread scores. Do note that these benchmarks were apart from the memory overclock tests and all CPUs were running DDR4 DIMMs at the same configuration.

But that’s not all, IT Cooker was also able to push the AMD Ryzen 7 4700G up to 4.815 GHz across all of its 8 cores which leaves the previous 4.65 GHz overclock in the dust. We don’t know about the stability of the system with this overclock or what sort of cooling and voltages the CPU was running with but the leaker seems to be fond of putting his 360mm radiator in a bucket of ice-chilled water which may not be reflective of real use but it’s not as ridiculous as cooling the chip with LN2. If that is the case, then we can actually see the Ryzen 7 4700G APU hitting such high clock speed with solid AIO liquid coolers. 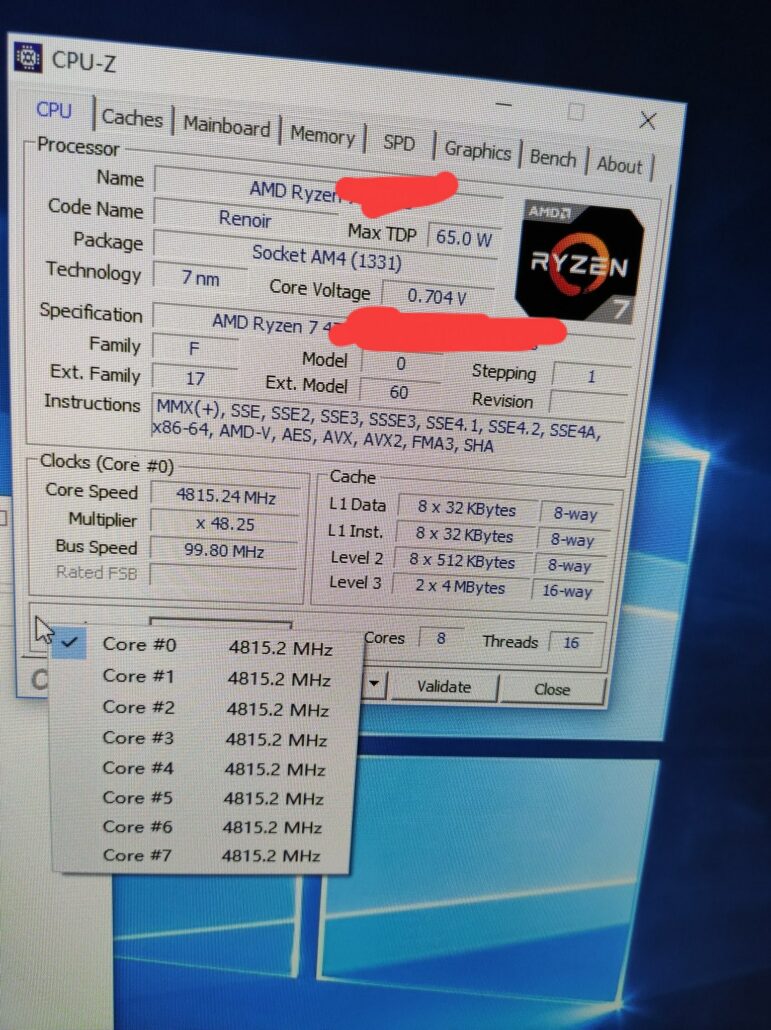 The Renoir family will be brought to the desktop platform after nearly 3 months since the launch of the mobility family. The two key technologies on the Renoir Desktop CPUs would be the updated Zen 2 cores and the Vega graphics architecture, all on a single monolithic die.

We’ve already talked about the AMD Ryzen 4000 PRO APU lineup in our previous post and while our sources mention that the lineup would be kept exclusive to the OEM and system integrator market, I personally believe that AMD will open up sales of standard Renoir parts in the retail channel soon after the PRO launch. Expect more details in the coming week.